There isn’t much to say about director Peter Berg’s attempt to transform the Hasbro board game Battleship into a major motion picture. Floating a reported $200-million budget, the movie is a heck of a long way from Friday Night Lights or The Kingdom. Heck, even Hancock, which I detested, had the core of a great idea nestled within in its fractured and ill-fitting packaging, something can’t be said for this particular robotically generic naval adventure.

Still, if treated as a parody of the Michael Bay meets Brett Ratner school of Transformers and Rush Hour hyperkinetic juvenile style of filmmaking, this idiotic hodgepodge of Top Gun meets From Here to Eternity meets Independence Day can be a wee bit of fun. So unbelievably stupid, so sensationally vapid, yet also so jingoistic and unabashedly patriotic, the movie is full of more laughs than just about any comedy I’ve seen this year. There were moments I laughed so hard I had to let out some politely appreciative applause, the final product a mind-numbing mess filled with more clichés than a Hallmark Father’s Day card.

Problem is, I don’t think either Berg or screenwriters Erich and Jon Hoeber (Red) mean for Battleship to be a comedy. Their movie is a big, loud and incredibly dumb action movie about an alien invasion just off the coast of Hawaii where Navy Destroyers and, naturally, Battleships are humanity’s only defense from total annihilation. The group drops a menagerie of stock characters into a familiar stew, allowing American and Japanese sailors to come together in camaraderie in order to save the day.

The central figure is Lieutenant Alex Hopper (Taylor Kitsch), a hotheaded upstart who only ended up in the Navy after his wooing of Samantha Shane (Brooklyn Decker), daughter of Pacific Fleet Admiral Shane (Liam Neeson), goes spectacular wrong leaving his big brother Commander Stone Hopper (Alexander Skarsgård) holding the bag. In order to avoid jail he ends up in the military, setting up a brotherly battle of wills so obvious you’ll have the basics figured out before the fleet even leaves Pearl Harbor.

There’s a subplot involving some international war games, but the only part of that worth mentioning is the appearance of a Japanese Destroyer under the command of Captain Yugi Nagata (Tadanobu Asano). Why? Because it’s his vessel and the two commanded by the two Stone brothers that find themselves smack-dab in the middle of the Pacific Ocean facing an alien onslaught, Admiral Shane and the rest of the fleet kept from assisting thanks to an impenetrable barrier the invaders have conveniently brought along to protect themselves with.

All of the expected silliness ensues, including a truly hysterical subplot involving Samantha, a nebbish scientist (Hamish Linklater) partially responsible for ‘inviting’ the visitors to Earth, and a wounded Army officer (real-life retired Army Colonel Gregory D. Gadson, easily delivering the film’s most memorable performance) who lost both his legs fighting overseas and has seemingly lost his will to go on. This trio are the only ones capable of stopping the aliens from setting up a communication link with their homeworld, and to call their resulting campaign to slow the bad guys down until the Navy can bombard their location is ludicrous is a massive understatement.

The movie looks like it cost that $200-million. More impressively, it sounds like it cost that much as well, the concussive nature of the sound design a virtual assault upon the senses. Berg orchestrates the chaos as well as to be expected, confidently staging sequences of attack and counterattack with more flair and energy than the movie deserves. But it’s all in service to a story and to ideas that are as routine as a walk through the neighborhood mall, everything about the project designed and constructed as nothing more than a corporately-funded celebration of excess that gives consumerism an even worse name than it already has.

But yet, and as I’ve already mentioned, if taken as parody, if looked at as satire, Battleship can be pretty entertaining. By the time a grid appeared in the middle of the screen looking more than a little bit like the game board that inspired the flick I couldn’t help but giggle, and when Berg gives a bunch of retired Korean-era Navy veterans the full-blown Armageddon meets The Right Stuff hero worship part of me wanted to cheer. The film is pure cheese, and while that doesn’t make it good that also doesn’t make it a disaster, and while the proceedings are certainly waterlogged beyond repair that doesn’t mean the vessel itself is in danger of sinking. 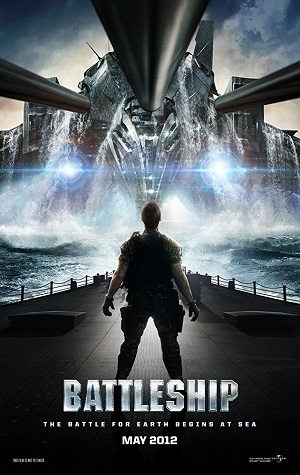