Few films in 2021 have left me as effortlessly charmed as Kenneth Branagh’s Belfast did. A spellbinding, semi-autobiographical drama seen through the eyes of a child, this is a handsomely life-affirming tale overflowing in intimate insights and told with a delicate hand. It captivated me body and soul, and rarely have I left the theater in such a state of content euphoria as I did after watching Branagh’s latest.

Buddy (Jude Hill) lives in a small, close-knit Belfast neighborhood with his older brother Will (Lewis McAskie) and his beloved Ma (Caitriona Balfe) and Pa (Jamie Dornan). Pa isn’t around much as he works in London, trying to make enough money to keep the family afloat while also attempting to pay off their large tax debt. But Buddy’s grandparents (Judi Dench, Ciarán Hinds) live nearby, and he’s happy to spend time with them whenever possible.

Set in 1969, Branagh’s look back at his childhood lands right around the start of “The Troubles,” otherwise known as the Northern Ireland conflict, which lasted roughly three decades. The film opens with a quick, brutal clash between Protestants and Catholics, and while Buddy’s home is left relatively unscathed, his Catholic neighbors aren’t as lucky. Quickly walls go up, soldiers are patrolling the streets and residents who yesterday sang and danced in the streets are now giving one another a wary side-eye.

Reminiscent of John Boorman’s 1987 classic Hope & Glory, Branagh gives children center stage whilst in the middle of unimaginable chaos and sudden spurts of violence. Buddy is the one taking all of this in. The wonders. The horrors. The sad, vicious truths. The moments of camaraderie and selflessness. Most of all, Buddy watches his parents as they attempt to navigate through these strange, discombobulating times, both doing what they think best to keep their family safely together.

This does mean Branagh isn’t interested in making any profound statements other than ones that are distinctly comforting. While there are weighty topics at play, he doesn’t spend a ton of time dissecting them in hard-hitting detail. A case could be made that he perhaps even plays all of this a bit too safe, and as such robs his drama of any additional unease or tension it may have had if the director had decided to dig a little deeper.

Not that I was bothered by this. By keeping things focused on Buddy’s responses, this story of family becomes something refreshingly soothing. It allows little, throwaway moments to speak volumes. It revels in the gentle quiet of sitting happily on a couch between two grandparents. It celebrates the nonsensical verbal bonds between parent and child. It sees hope in horror and, when tragedy does strike, it does so in a way that allows for grief for what is lost to deftly intermingle with the indefinable promise a new dawn brings.

It helps that the entire ensemble is superb. Newcomer Hill gives one of the year’s best child performances, his expressive eyes showcasing a bottomless pit of emotional breadth that’s divine. The youngster is the focal point and he always appears to be up to the challenge, and I was astonished at how completely he disappeared inside the director’s nine-year-old alter ego.

The adults are equally outstanding. Not that this is likely altogether shocking where it comes to veterans like Dench and Hinds. That they instantaneously vanish into the naturalistic rhythms of Buddy’s grandparents isn’t exactly a surprise. But both still find so many little ways to make these characters come to life in a multitude of exhilarating ways, the beauteous ease in which they intertwine into one another’s arms extraordinary.

Then there are Dornan and Balfe. They are spellbinding. I couldn’t take my eyes off either of them. The relationship between their characters has a lived-in grace that’s outstanding. Each actor waltzes around the other with such nimble complexity it’s as if Buddy’s parents have lept out of the screen and three-dimensionally materialized into the real world.

Branagh allows every moment to transpire almost as if out of thin air. He balances all of the outside influences competing for Buddy’s attention skillfully, exhibiting the same sort of confident touch he brought to his masterful Shakespeare trifecta of Henry V, Much Ado About Nothing and Hamlet. The director allows Haris Zambarloukos’ (Cinderella) elegantly minimalistic black-and-white camerawork to almost become a character in the film in its own right, making the infrequent sudden bursts of color have an even greater impact when they occur.

When it was over, all I wanted to do was dance along with Ma and Pa and celebrate all of their family’s achievements, mourn their tragic losses and dream of all the vast, unclaimed potential still sitting out there in front of them to strive for and achieve in the future. Branagh pulls from his past to tell a story that’s as vibrant and alive as any moment we’re all living through right this second. Belfast filled my heart with joy, and there’s nothing better than that. 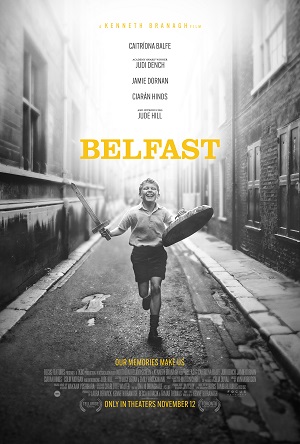