Rocking Blinded by the Light an Electrifying Musical Celebration

Javed (Viveik Kalra) is a smart, resourceful British teenager living in the town of Luton. It is 1987, and his Pakistani immigrant father Malik (Kulvinder Ghir) has just lost his job at a local factory even though he’s one of their best employees, his mother Noor (Meera Ganatra) currently working herself to the bone doing laundry out of the house in order to keep some form of income coming in. Javed writes poetry, stories and song lyrics in the privacy of his room, dreaming of a world where he can have a future as a journalist and an author and not one where he is feeling the pressure to follow an alternative, more economically fruitful career path.

Things begin to change when his work catches the eye of his English Lit teacher Ms. Clay (Hayley Atwell). They shift even more when he is introduced by fellow student Roops (Aaron Phagura) to the music of New Jersey icon Bruce Springsteen. Suddenly Javed is stirred to achieve the impossible. He begins writing like a man possessed, even managing to get a few articles published in the local newspaper where he ends up securing a position that’s more or less a glorified unpaid internship. But Javed’s battle of wills with his dad remains an oppressive constant, the two having so much trouble seeing eye-to-eye it’s an actual question as to whether or not they will still have any sort of relationship the moment the teen graduates and heads off for university.

Based on the memoir Greetings from Bury Park: Race, Religion and Rock N’ Roll by journalist Sarfraz Manzoor, and inspired by Bruce Springsteen’s music, writer/director Gurinder Chadha’s Blinded by the Light is her best film since her sensational 2002 gem Bend It Like Beckham. Featuring a wonderful central performance from newcomer Kalra and dynamic supporting turns from Ghir, Ganatra, Phagura and Nell Williams (as Javed’s classmate and friend Eliza), this movie is consistently terrific. It is a rousing working-class drama that deals with a myriad of complex issues and themes with creatively multifaceted vigor, all of it scored to Springsteen’s songs in ways that prove to be increasingly imaginative as events progress.

It’s kind of incredible all of this works as well as it does. The plot doesn’t go anywhere surprising. How Javed’s friendships with Shoop and Nell evolve follows a fairly standard template. As for the relationship between the teen and his father, there’s nothing shocking about that, either. Their face-off is a tried and true aspect of stories like these that goes back practically to cinema’s silent age, immigrant tales of parents having to deal with a changing world while their children pursue dreams outside of what up to then had been the standard norm not exactly original.

But it’s authentic. And it’s genuine. And it happens time and time again throughout history. That’s why stories like these, especially when they’re as well-told as this one is, almost always end up being compelling. They cross generational, racial and gender lines in ways that make them affectingly universal, the emotional truths sitting at their centers easy to embrace no matter what the viewer’s individual background might end up proving to be.

Chadha does an amazing job developing this relationship between father and son. Racial tensions, economic anxieties, societal expectations and economic realities all play a part in how Javed and Malik communicate with one another. Their generational divide isn’t a fantasy, but it pales in comparison to many of these other aspects of life both men are trying to deal with in the best way each knows how. They are so blinded by the inequities weighing them down they find it difficult to embrace the commonalities that link them in ways that go way beyond family and genetics. Veteran character actor Ghir is particularly excellent, adding a layer of world-weary pathos that’s coupled with a stalwart resilience that helps make Malik a stoic, authoritative figure whose personal setbacks have only strengthened his resolve as far as it comes to his children achieving more from their lives than he feels he has.

The relationship between Javed and his former – or still current; it’s never entirely clear – best friend and neighbor Matt (Dean-Charles Chapman) isn’t handled all that well, their constantly shifting relationship shoehorned into the proceedings in a rather slapdash manner. Some of the musical transitions are also inelegantly forced into the story, these 1980s-style John Hughes-type interludes noticeably breaking the innate realism of Javed’s overall journey a significant amount.

But not fatalistically so. Springsteen’s songs are utilized magnificently the majority of the time, the artist’s lyrics infusing things with a peppy urgency that suits Javed’s world nicely. The intransigent realities of working class American life Springsteen sings so passionately about fit into Thatcher-era Great Britain with energetic forcefulness, and it’s easy to see how this bright, industrious son of Pakistani immigrants would respond to each song so personally. His obsession with the musician fuels his journalistic desires, the young man discovering a sense of urgency bubbling within his core that makes him believe anything is possible as long as he’s willing to work hard enough to achieve it.

What’s great about this is that Chadha doesn’t shy away from showing how this obsession, so positive an influence on Javed’s life in so many different ways, also inadvertently makes him more than a tad selfish. While a little bit of egocentricity can be a good thing, too much of it can fundamentally alter one’s relationships with friends and family in ways that are devastatingly significant and potentially catastrophic. This is an unexpected hurdle Javed needs to overcome, and while the answer to the question as to whether or not he will do so is obvious, there is so much joy to be found in watching him do it the delicate tears that were streaming down my face during the climax were undeniably more than welcome.

It is almost as if the movie’s more noticeable imperfections only end up making the feature as a whole even more infectiously intoxicating. Chadha strums the heartstrings with fervent gusto, the talented filmmaker delivering humanistic melodies that are both period-specific and yet also indescribably timeless in their universal appeal in the same tuneful breath. Blinded by the Light is a musical celebration of life, family, friendship and love, the song it sings as memorably pure and as hauntingly electrifying as any of the ones Springsteen himself has written and performed throughout his illustrious career. 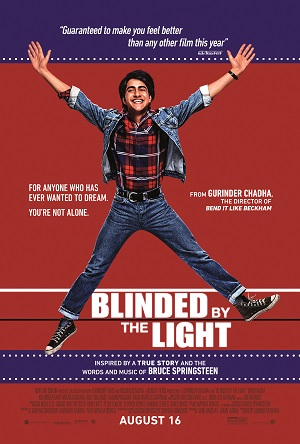