After a debilitating home invasion that has left mom Liza (Katie Holmes) emotionally scarred and her son Jude (Christopher Convery) suddenly mute, dad Sean (Owain Yeoman) thinks it might be a good idea for them to move out of the heart of London and into the country in order to psychologically heal. They find the perfect situation in a lovely guest house located on a secluded estate, the primary mansion currently under renovation for reasons that aren’t initially entirely clear.

While exploring the surrounding the property, Jude finds a well-dressed porcelain doll buried in the woods. After Liza cleans it up, the youngster immediately bonds to the toy, naming him “Brahms.” But even though both parents can see how the doll is helping their son put the trauma of the home invasion behind him, they are also noticing some worrying signs that maybe Jude is bonding a bit too much with his new friend. It soon becomes apparent that Brahms might not be the healthy reparative influence both Liza and Sean first assumed, the doll’s sordid history a symphony of madness that could leave their family in a state of tragic ruination if left unchecked.

I’m not going to lie and say I was a giant fan of director William Brent Bell’s 2016 horror yarn The Boy. What I will admit is that this minor box office success did a heck of a lot more with its relatively simple premise than I anticipated. It played rather nimbly with the conventions of the “cursed doll” subgenre, screenwriter Stacey Menear coming up with a loopily inventive third act twist that, while not entirely making a lick of sense, couldn’t help but make me smile like a deranged purveyor of the loopily chaotic as I watched events conclude.

Pity Bell and Menear didn’t bring that type of creative eccentricity to their sequel, Brahms: The Boy II. While not necessarily poorly made or badly acted, that still does not mean that this follow-up doesn’t make all of the tiredly mundane and boringly obvious narrative choices their original somehow avoided. It also retcons the more memorable aspects of The Boy, undercutting the terror that was generated in that effort by coming up with an inane, decidedly more concrete supernatural explanation for all that happened during that film and is also taking place here.

This is a lazy sequel. Bell and Menear add aspects of demonic possession (or something close to it) and, instead of allowing Brahms to be cleverly creepy decoy that might misdirect the audience away from the true terror lurking behind the curtain, waste little time solidifying the doll as the primary source of the blossoming evil. The film also revels in pointless jump scares that rarely (if ever) feel organic to what’s happening up on the screen, making them exasperatingly obnoxious instead of joltingly suspenseful. There’s no imagination, no ingenuity, everything building to a crushingly obvious denouement that had me rolling my eyes in disappointment.

What’s most frustrating is that the premise for this sequel does show promise. Considering the home invasion that begins the story, I feel there were definitely ways the filmmakers could have utilized Brahms to once again play with genre tropes and clichés but in a far different way than they did in their earlier film. They do a solid job showing how this near-death incident has psychologically wounded Liza and Jude, so it’s possible to envisage how the doll’s appearance could have led either one or even the both of them to start questioning their own sanity.

Granted, I can’t judge the sequel on what it isn’t or what I felt it maybe could have been, I can only comment on what it actually is, and on that front Brahms: The Boy II comes up massively short of being anything even moderately enjoyable. Its twists are preordained. Its tricks nonexistent. Its insistence on revealing its secrets so early on in the story perplexing. This makes watching the sequel exceedingly difficult, and by extension also makes the first film look like an all-time horror classic instead of the amusingly resourceful, if still somewhat forgettable throwaway I originally felt it was back in 2016. 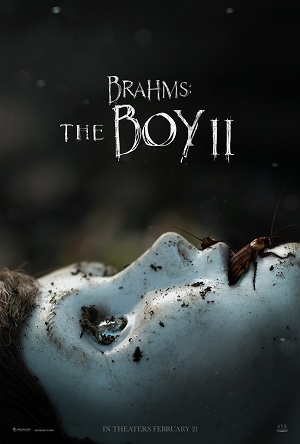