Five college friends, Dana (Kristen Connolly), Curt (Chris Hemsworth), Jules (Anna Hutchison), Marty (Fran Kranz) and Holden (Jesse Williams), head for a weekend in the country staying at a secluded cabin deep in the middle of a mountainous section of the woods. While there, they discover a mysterious cadre of eerie items in the cellar, unintentionally unleashing a bloody force that will stalk, terrorize and dismember them one-by-one. That, however, is only half the story.

What’s the rest? Don’t look at me for answers, because the fun of Cloverfield writer Drew Goddard’s directorial debut The Cabin in the Woods is in discovering all its twists and turns as it upsets the typical narrative status quo. Working from an inspired script co-written with Joss Whedon, the pair’s time together going all the way back to their “Buffy the Vampire Slayer” and “Angel,” Goddard has assembled a wickedly nasty and exuberantly energetic thrill ride that embraces the schlock aesthetics of its genre just as completely as it assuredly dismantles them. It is the most agreeably effervescent deconstruction of horror clichés since the original Scream, the filmmakers and their game cast of veterans and newcomers delivering a sensational monster-mash I can’t say I’ve ever seen before.

It’s hard to say anything more. The film’s trailers and commercials have already gone too far in spoiling a number of the surprises, and even though Goddard and Whedon reveal their core secret during the film’s hilariously inspired pre-credits sequence that doesn’t mean they come close to turning over all of their cards. They approach the film as Duncan Jones did with both Moon and Source Code, not so much keeping their secrets hidden until the end but instead doling out information judiciously as the narrative requires.

I love this approach. While sometimes having a big ‘Wow!’ moment can work for a film (i.e. The Usual Suspects, The Sixth Sense), more often than not the viewer spends so much time trying to figure out what said twist will be it ends up one’s overall enjoyment of the remainder of the motion picture. The tract Goddard and Whedon utilizes allows their characters to expand and evolve realistically, the viewer in turn growing to care more for them as they become increasingly invested in discovering what is going on and why.

I love how the duo introduce their central quintet as smart and sophisticated, allowing circumstance (and other, better left unspoken devices) to transform them into the stereotypes that could potentially lead to their collective doom. Dana, Jules, Marty and the rest are representative of society as a whole, each one of them cogs in a very large machine most never see and those that do barely understand. They are human devices to be manipulated, their collective battle to undo what’s being done to them not so subtly analogous to the state of political disinformation assaulting the voting public on a regular basis, even more so now during this current presidential election cycle.

Not that I’m reading more into this than is necessary. At its heart, The Cabin in the Woods is a genre riff composed by two master musicians who know the classics inside and out. There pay gorily gentle homage to Night of the Living Dead, Suspiria, Evil Dead, Japanese horror movies, Dead Alive, The Texas Chainsaw Massacre, Halloween, Fright Night, Hellraiser, Friday the 13th and just about everything else the genre has ever had the giddy audacity to offer throughout a century of cinema. Catching all the references is next to impossible (I swear I saw one for Chopping Mall), and it will take multiple viewings to come even close to being able to do so.

But the biggest influences, without question, have to be the films of John Carpenter and the writings of H.P. Lovecraft. The movie is a delicately brutal love letter to them, and anyone familiar with either is going to discover countless layers to Goddard and Whedon’s mythology that can be explicitly linked back to both men. The explosively cynical finale is one part The Thing, two parts Prince of Darkness and three parts In the Mouth of Madness, making for the kind of apocalyptically satisfying denouement I’ll be talking rhapsodically about for eons.

I’m not going to leave things there. The Cabin in the Woods is a winner. I can’t wait to watch it again, and I’m sure this will become an annual staple for re-watch every Halloween. Goddard shows directorial promise, engineering an intricate spectacle of mayhem and monsters that doesn’t forget that the human element is just as important as the supernatural one. 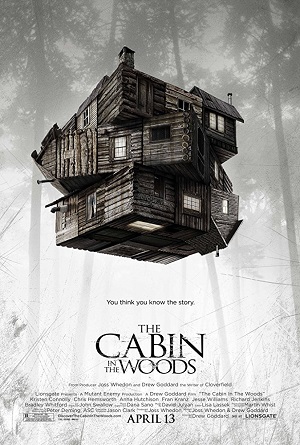