After their battle against Ultron left an entire city floating perilously in midair with untold numbers of civilians killed during the skirmish, the last thing Steve Rogers (Chris Evans) and his Avengers needed was another mission to go south on them. But a confrontation with escaped criminal and Hydra agent Brock Rumlow (Frank Grillo) goes spectacularly wrong, Wanda Maximoff (Elizabeth Olsen), a.k.a. the Scarlet Witch, unable to contain the explosion from a hidden bomb, the subsequent blast tearing an adjacent building containing untold innocents to pieces.

In the wake of this madness, new Secretary of State Thaddeus Ross (William Hurt) has negotiated a deal with over a 100 different nations that will create an agency to oversee the Avengers, a plan Tony Stark (Robert Downey, Jr.), Vision (Paul Bettany) and Lieutenant James Rhodes (Don Cheadle) all find themselves agreeing with. Even Natasha Romanoff (Scarlett Johansson) tentatively thinks this could potentially be a good idea, the former Russian double-agent and assassin starting to believe she and her super-powered compatriots might be doing more harm than good.

It will come as no surprise to anyone buying a ticket to see Marvel’s latest superhero extravaganza Captain America: Civil War that Rogers, along with a number of his fellow Avengers, does not think putting an outside agency in charge of what this group of heroes can and cannot do is such a good idea. The MacGuffin that pits superhero against superhero is former WWII vet and Captain America’s best friend Bucky Barnes (Sebastian Stan), the fallen warrior resurrected in secret by Hydra as the Winter Soldier. His mind shattered into pieces, Rogers still feels compelled to protect his former companion, especially after Bucky’s suspected to have murdered the current Wakandan King T’Challa’s (Chadwick Boseman) father T’Chaka (John Kani) during the signing of the accords.

As solid as the majority of the twelve films sitting inside the Marvel Cinematic Universe (MCU) up to this point have been, Iron Man 2, The Incredible Hulk and Thor: The Dark World notwithstanding, the big complaint in regards to a number of them is that the studio is rarely content to let them rest as self-contained stories. Additional elements, all of them setting up adventures, films and sequels still yet to come, are inelegantly shoehorned into the proceedings in ways that are notably obnoxious, oftentimes keeping these stories from reaching their full potential. The worst offender on this front was Avengers: Age of Ultron, so much of that feature’s running time devoted to nonsensical subplots involving characters taking mystical baths and big green behemoths disappearing to who-knows-where, all so the ultimate big bad can come calling in a pair of sequels not hitting screens for another couple of years.

The weird thing about Civil War, which isn’t so much a direct sequel to Captain America: The Winter Soldier as it is a third Avengers flick, is that it is all prequel, all setup, returning directors Anthony and Joe Russo and series writers Christopher Markus and Stephen McFeely designing a story where nothing really happens other than the placing of building blocks that will allow the events of subsequent MCU entries to take place. It is a movie more or less devoid of a central villain, a mysterious man by the name of Zemo (Daniel Brühl) orchestrating things behind the scenes, but not in a way that’s close to as nefarious or terrible as is the norm for comic book adventures such as this, and that is also a bizarre oddity that potentially could have some viewers scratching their head wondering what is going on.

Yet the craziest part of all of this is that, somehow, someway, this actually kind of works, the film relying upon the evolution and emotional maturation of its characters to do all of the heavy lifting for it. Even though the central scenario itself is flimsy, the examination of what actually constitutes heroism, what is an individual’s responsibility to stand up for what is right no matter the cost, those elements are as strong as Captain America’s vibranium shield. This gives things a depth and a heft that the majority of the MCU entries have decidedly lacked, the relationship between Rogers, Stark and Barnes, in particular, put under an intense microscope fan and non-fan alike will likely find intriguing.

Not that Markus, McFeely and the Russo brothers skimp on the action front. The filmmakers design a number of exhilarating set pieces, not the least of which is a central throw-down between superheroes set at an empty German airport. Iron Man and Captain America face-off with their respective teams in tow, all going after one another with their full array of powers, each certain their point-of-view as it pertains to the accords the correct one. It’s a spectacular sequence that brings back past heroes like Clint Barton (Jeremy Renner), a.k.a. Hawkeye, and Scott Lang (Paul Rudd), a.k.a. Ant-Man, while also introducing new ones like King T’Challa’s alter ego the Black Panther and everyone’s favorite friendly neighborhood wall-crawler Peter Parker (Tom Holland), his nom de plume known to just about anyone with a pulse, each showcasing their respective abilities to something bordering on perfection.

All of this being said, as marvelous as Evans continues to be as the titular character, as invested as Downey might be in the outcome of the proceedings (unlike Avengers: Age of Ultron), as glorious as many of the action sequences are, it’s hard to get past the fact that nothing, practically nothing of overall consequence, ends up happening. Sure, characters are left in a different state of being than they were at the start of the story, but as far as actual narrative mechanics are concerned there’s precious little of import that transpires other than the moving of the pieces across the chessboard so that they’re all in proper placement for when the next incarnation of Spider-Man arrives in 2017 and both a new Avengers entry and Black Panther’s solo outing hit screens in 2018.

Captain America: Civil War is fun; it’s too well made, acted and scripted for it to be anything less. But it’s also much ado about nothing, the fact of which is annoying me more and more as time goes by. I still liked the movie, though, and even if it is noticeably weaker than either Captain America: The First Avenger or Captain America: The Winter Soldier it’s still good enough I’m relatively eager to give it a second look sooner rather than later. 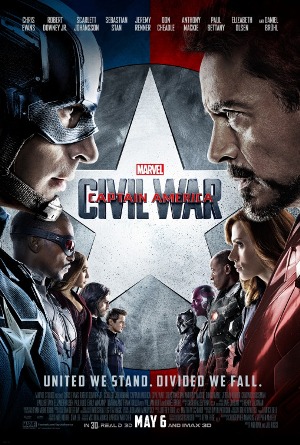