Alfonso Cuarón’s Children of Men is the best film of 2006. Based on the book by P.D. James, this sci-fi thriller set in a devastated London circa 2027 is a phenomenal human adventure unlike anything else I’ve seen this year. It is a profound and moving drama bristling with thrills, chills and shocking surprises. The movie is potentially an instant classic, one that will undoubtedly stand the test of time as a jaw-dropping masterwork that once seen will be impossible to forget.

The youngest man on the planet has died at 18-years-old. While the world mourns, Theo (Clive Owen) shakes his head and uncaringly goes on about his day. He is resigned to the end of the world, his only care now to spend time with his reclusive friend Jasper (Michael Caine) smoking the man’s homegrown pot and trying not to get noticed by an England on the edge of spiraling into uncontrollable chaos.

But that’s before his ex-wife Julian (Julianne Moore) re-enters his life. She has her associates abduct Theo because she needs his help. He isn’t exactly happy to see her. But he’ll still give Julian the help she needs. Not because he wants to, but because the downtrodden nobody wants the cold, hard cash she’ll pay him for his services.

Theo has a choice to make. In a world without children and where hope is a commodity no longer traded on the open market, things do not work out exactly as planned. He can either look the other way and continue going through the motions towards extinction, or he can take one final stand against extinction, putting his life on the line for an illegal immigrant named Kee (Clare-Hope Ashitey) he’s been trusted to protect. Why? Kee is pregnant, and with the world going straight to Hell the hope she carries inside her belly must be protected at all cost.

Children of Men is a triumph. Cuarón has made many great movies including A Little Princess, Y Tu Mamá También and Harry Potter and the Prisoner of Azkaban, but this is the one many are going to look at him in a fresh new light after watching. This effort carries itself like nothing else the esteemed director has ever made before, and from the acting, to the production design, to the music, to the script, there is not a single piece of this magnificent puzzle that feels misplaced.

A special mention must be made for Emmanuel Lubezki’s (The New World) stunning cinematography. In a year of gloriously photographed motion pictures both big and small, what the cinematographer does here boggles the mind. The camera becomes a character within the film, taking the audience on a spellbinding journey so perfect I practically forgot I was watching a movie and was not a part of the events being depicted up there on the screen. It’s breathtaking stuff, a violent montage sending Theo down into a chaotic battlefield one of the most immersive, striking and horrifying sequences of film I’ve ever had the pleasure to experience sitting inside of a theatre.

There is so much more to talk about and discuss I almost don’t know where to begin. The most striking thing might just be the fact that Cuarón’s opus isn’t sci-fi at all, its just masquerading as one. That’s hyperbole, of course, but the reality still is that this picture is today, right now, this very second, the filmmaker mirroring our disintegrating modern society with devastating clarity. This makes the film a terrifying glimpse at a world that’s not so far away from becoming the one we’re currently living in. With borders closing and immigrants being treated as criminals even before they have the chance to say their first, “hello,” the film presages a disturbing future that could very easily come to pass if we sit on our duffs and in our collective cynicism and apathy allow it to happen.

Yet where it is easy to see despair Cuarón sees hope. There is an emotional high to Theo’s journey to a fabled “Promised Land” to deliver Kee to safety that is insightful and moving. The director looks at the world and sees how, if given an opportunity, an entire generation might be able to take it upon themselves to make the hard decisions regarding climate change, immigration, economic inequality and a whole host of other issues that are desperately needed to make the world a better place.

Children of Men is a stunning powerhouse, and it is almost impossible to grasp all it is attempting to say in just a single viewing. Cuarón’s film is a voyage of discovery, despair, triumph and reconciliation. Most of all it has hope for a better tomorrow, and in a modern world so close to self-destruction to be reminded of what it is to have some of that hope isn’t just wonderful, it’s nothing less than perfect. 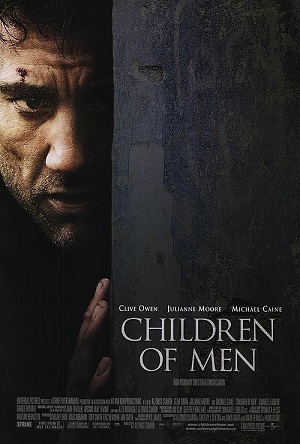