A viral marketing sensation that came out of nowhere to become a modest-sized hit in January of 2008, the found footage rampaging monster movie Cloverfield was something of a sensation. Eight years later, debuting a trailer a scant two months before its theatrical release, 2016’s 10 Cloverfield Lane was a critical sensation and a sizable box office success, both factors leading many to believe studio Paramount Pictures and producer J.J. Abrams had the makings of a successful anthology franchise on their hands, one that could move in the realms of science fiction and horror as if it were a cinematic “Twilight Zone” or “The Outer Limits” for the 21st century. 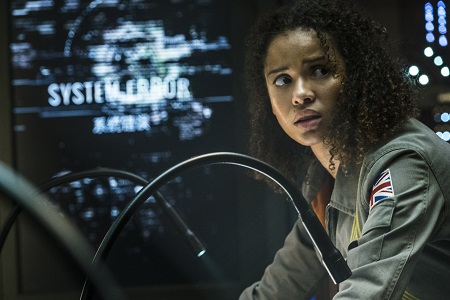 Changing the game once again, Paramount and Abrams turned over their latest installment in their series The Cloverfield Paradox over to Netflix for release. The streaming service debuted a 30-second trailer for the movie during Sunday’s Super Bowl broadcast, subsequently setting the release for the film as the moment the game between the Philadelphia Eagles and the New England Patriots came to an end. The buzz of this announcement immediately took the internet by storm, social media blowing up as viewers wondered what this newest chapter was going to offer up to mull over and debate. Many also openly wondered why the feature was bypassing a theatrical exhibition entirely in order to premiere on Netflix, this unveiling feeling like both a cagey power play for the powerful streaming company as well as an easy way for Paramount and Abrams to avoid any bad word-of-mouth they might have feared this newest Cloverfield chapter was potentially going to generate.

I feel pretty confident that this latter point is the main reason a theatrical release for The Cloverfield Paradox was put on hold. For as clever and as genre-breaking as both Cloverfield and 10 Cloverfield Lane proved to be, they were also fairly easy to sell, their basic plots easy for general audiences to grasp. Not so much this time, director Julius Onah and writers Oren Uziel (22 Jump Street) and Doug Jung (Star Trek: Beyond) coming up with a story and film that is close to indescribable. A hodgepodge of everything from Alien to Event Horizon to an episode of “Fringe” to Back to the Future to an H.P. Lovecraft story to the classic 1983 television movie The Day After, to call this effort a mess would be massively understating things. It’s likely, at least in today’s marketplace, theatrically this would have been an almost certain box office dud, and not wanting to weaken the brand for future installments going for an impromptu showcase on Netflix (for which the streaming service reportedly paid a hefty $50-million for the privilege) made a lot of sense.

Sometime in the very near future, a global energy shortage has the Earth on the brink of a third World War. In order to stave off what could be an extinction-level event, a group of countries send a team of crack scientists up to a newly built space station to conduct tests of a device that could change the course of history forever and instantaneously end the energy crisis. Led by the determined Commander Kiel (David Oyelowo) and with a scientific team headed up by the egotistically self-confident Schmidt (Daniel Brühl), the group has been in orbit for almost two years and has met with little in the way of a success. But with fellow team members Hamilton (Gugu Mbatha-Raw), Monk (John Ortiz), Mundy (Chris O’Dowd), Volkov (Aksel Hennie) and Tam (Ziyi Zhang) looking on with hope-filled eyes, Schmidt is certain the next test will deliver the results they’ve all been praying for.

Initially things go as planned. The experiment is a success, the station’s crew giddy once they realize they’ve finally discovered a source of unlimited energy that will help save the planet. But suddenly the unexpected occurs, an event that bends the very fabric of space and time. Unable to find the Earth, the station suffering from a number of inexplicable malfunctions that must be repaired if they’re ever going to make it back home and report on their discovery, Hamilton in particular finds her sense of reality forever shattered. The catalyst for this is the arrival of an apparent stowaway named Jensen (Elizabeth Debicki), the woman claiming to be one of her best friends as well as a vital member of the crew. Yet this is just one of a myriad of mysteries the team must pool their resources together in order to solve, all the while back on Earth a strange series of monstrous events has plunged the entire planet into a fiery state of terrifying darkness.

There is a lot going, and almost none of it makes sense. Yet as obnoxiously convoluted and overwrought as everything is, somehow Onah manages to still present things in a way that’s fascinating no matter how pointlessly bizarre much of what is transpiring undeniably is. He also stages a handful of strong, unsettling shock sequences that caught me by surprise, the introduction of Debicki’s character an absolute showstopper. Doug J. Meerdink’s (The Watch) production design is sensational, while composer Bear McCreary’s (Colossal) thunderously eloquent score adds to the excitement level considerably. The film is also magnificently shot by Daniel Mindel (Star Trek: Into Darkness), the manner in which he navigates in and around the space station’s interiors reminding me at various times of William Fraker’s classic visual compositions for Roman Polanski’s Rosemary’s Baby. 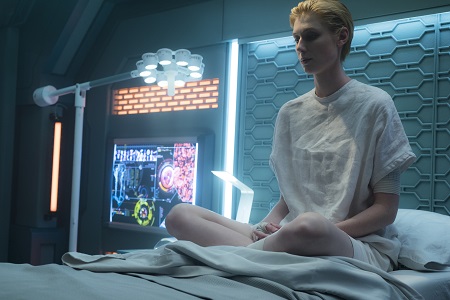 More importantly, the cast is universally excellent, Mbatha-Raw, Debicki and O’Dowd in particular. The latter appears to be having a grand time gallivanting inside this sci-fi playground, some of his one-liners and deadpan observations getting me to laugh out loud on multiple occasions. Debicki grounds her mysterious character in a surreal pathos that is palpably genuine, the shock and dissociative psychological trauma she goes through understandable and easy to relate to once the full magnitude of her situation is revealed. It is Mbatha-Raw, however, who is the film’s heart and soul, her emotionally devastating journey one overflowing in heartbreak. Yet Hamilton’s perseverance in the face of the unthinkable is equally affecting, her ability to see the bigger picture even though she’s right on the verge of falling to metaphorical pieces a form of quiet courageous heroism stories like this one seldom, if ever, take the time showcase in such intimately poignant detail.

Still, I’m not kidding when I say that this movie is a mess. It almost feels as if Abrams and company had Onah and his creative team shoehorn in the “Cloverfield” aspects of the story at the very last minute, and as such the tissue connecting this installment to its 2008 predecessor (this is supposed to explain the appearance of the monster that destroyed New York City) is tenuous at best. More importantly, subplots and narrative devices talking about multiverses, alternate realities and time travel paradoxes aren’t given room to breathe, and as such it all becomes a twisted pretzel of mental and psychological sci-fi gymnastics impossible to make heads or tails of. The audacity of a Netflix premiere a little over two hours after a Super Bowl trailer presentation aside, there’s precious little about The Cloverfield Paradox that rises to the same heights as the previous two entries in the anthology series soared to, making this one more of a uniquely weird curiosity than it is anything compellingly substantive. 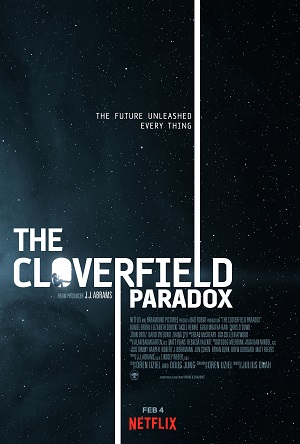