“Take comfort in knowing you never had a choice.”

Here’s what I wrote about this one back in August of 2004:

“For Max (Jamie Foxx), the 6:00 p.m. to 4:00 a.m. swing shift in Los Angeles is no big thing, it’s just another night in a 12-year temp job driving a cab. People get in, people get out, and while most of them don’t even notice you exist, now and then one comes along that does.

Such is the case when the beguiling Annie (Jada Pinkett Smith) shuts his door. An Assistant U.S. District Attorney, this laid-back bombshell gets under Max’s skin, putting him immediately at ease. The two share some quiet banter, gently discussing their lives like old friends. When Annie exits the cab and hands him her business card, it’s not important if he calls her or not, it’s that they’ve made a connection, a moment of humanity contrasted against the emotionless L.A. skyline.

Max gets what appears to be a second terrific fare in as many stops as the icy Vincent (Tom Cruise) steps into the cab. A businessman with only one evening to close a big real estate deal and impressed with Max’s charisma and skills behind the wheel, he offers the cabby six-hundred dollars to make five stops, an offer too rich for even the by-the-book driver to refuse.

Maybe he should have. Vincent isn’t a realtor, he’s a hitman, and he’s got a list of people he needs to knockoff before dawn. Max is unavoidably drawn into the assassin’s game plan, making him the chauffeur to his own demise. With only a few hours to calculate an escape, can this man of big dreams and little action do what is necessary to survive the night and maybe even save the day?

What’s special about Michael Mann’s new crime thriller Collateral isn’t that it goes in any new directions but instead that it is so naturalistically in tune with the cadences of a multifaceted humanity. This isn’t a traditional three-act picture. All the events leading up to this fateful night happen off-screen and are only talked about in general terms. This is a story about the here and now, about the actions required when extreme circumstances come knocking, this compression of time and space giving the film an epic urgency most contemporary thrillers sadly lack.

Most attractive is how easygoing things are initially. Mann lulls you in, quietly showing who Max is, setting up his nightly routine as if he’s the bread and driving the cab is the butter. In lesser hands there would be a rush to get to the punchline, a hurry to reveal Vincent for who he is. Not Mann. He knows the action and the violence will come soon enough, understands that taking time to set up the characters, their relationships and the situations they all find themselves in is what matters most.

This human dimension, not just between Max and Vincent but with the sideline characters, too, is what resonates most. I love the way that Mark Ruffalo’s every-man detective sniffs at the periphery of a night that just smells all wrong, tragically finding himself correct even when best friends and FBI rivals think he’s full of crap. Or, the way the great Javier Bardem sinisterly twists his words around impenetrable innuendo as a mysterious crime lord. Then there is Barry Shabaka Henley, evangelically relating tales of Miles Davis and lost youth to an infatuated Vincent and Max, only to see his world shatter with the mention of a single name.

But that cab, that lonely silent car full of faux vinyl seats and colorless decoration, is where the magic happens. Cruise and Foxx find a chemistry worthy of a hit love song, each discovering notes in the other which go from delirium to heartbreak all with the twist of a finger. They are the masters of their domain, each knowing they cannot survive the night without the help of the other.

Cruise, an uncommonly underrated actor despite three Oscar nominations, revels in playing a character who is nothing but pure evil. Mann takes the actor where he’s never journeyed before. What’s great is that Vincent, vile and masochistic to the core, still has his own moral code of unnervingly relatable ethics, and not finishing this night’s errands would be a horrendous breach of all he holds dear.

Still, this is Foxx’s movie. He’s stupendous. In almost every scene, this is the moment where I can no longer fail to see this former In Living Color buffoon for the major talent he undeniably is. From Any Given Sunday to Ali to Redemption to even Breakin’ All the Rules, Foxx has proven he has the potential to be a breakout big-time star. This proves it. Max is a dreamer, but he’s lost the will to move beyond the dream. Vincent wakes him out of his stupor, shows him life is more than just finding the perfect moment that can’t ever truly exist. He’s a flawed, sometimes shallow man who is broken but not beaten, and Foxx brings him to life with a slowly simmering burn that’s mesmerizing.

If Stuart Beattie’s (Pirates of the Caribbean: The Curse of the Black Pearl) screenplay becomes more than a bit contrived towards the end, if coincidence and chance finally play too big a role, this is still a masterfully crafted thriller. Mann knows these L.A. streets like the back of his hand, has an in-depth understanding of which turns work, which turns don’t and which turns will throw the audience for a sideways loop. His mix of High-Definition Digital Video and traditional 35mm film is inspiring (cinematographers Dione Beebe and Paul Cameron doing exemplary work), and there is an energetic immediacy to the project that’s nerve-rattling.

Expectation has floated around this project since the second Cruise signed on and Mann agreed to direct. Would they get along? Could the director deliver with such a hands-on star? The answer is readily apparent. Collateral is a wily creature, one that is made all the better thanks to the crafty prey-turned-predator slowly springing to life hiding in plain sight right at the center of the chaos.

The 4K Ultra HD disc ports over the excellent Audio Commentary with director Michael Mann as well as the Original Theatrical Trailer. All additional extras are contained on the previously released Blu-ray included with this set.

A Digital HD copy of the film is also included as part of this release.

Collateral has held up brilliantly. A great film at the time of its release, Michael Mann’s seductively unsettling crime thriller has to my mind emerged as one of the the 21st century’s best pieces of pop entertainment. Paramount’s 4K Ultra HD presentation is strong, and while I’d have loved an audio upgrade that’s a relatively minor detail. Highly recommended. 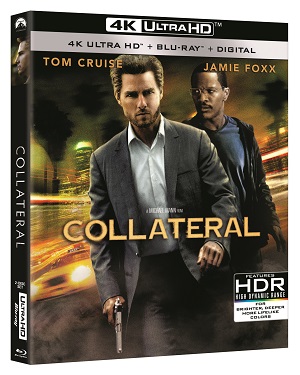