Can’t say this was one DreamWorks’ effort that I felt warranted a sequel. Yet seven years later here we are with The Croods: A New Age. De Micco and Sanders have turned over directorial duties to newbie Joel Crawford (a veteran animator who worked on all three Kung Fu Panda adventures as well as helming the “Trolls Holiday” television special), while their original story was reworked by four credited screenwriters. It’s far more of a slapdash effort than its predecessor was, and as such doesn’t cast the same intoxicatingly goofy spell.

Still, this second chapter in the Croods family journey made me fairly happy, and I frequently laughed out loud. There are a number of ingenious bits, and strictly from a animation perspective I’m tempted to say this sequel is even more extraordinary than the first film was. Additionally, the vocal cast is still perfect, the addition of Peter Dinklage, Kelly Marie Tran and especially Leslie Mann to the ensemble icing on the prehistoric cake.

Set an undisclosed time after the events of The Croods, the story picks up with the family, now with the energetic Guy (Ryan Reynolds) as a firm member of their pack, still chasing the daylight looking for their tomorrow. Coming across a massive wooden wall, they are shocked to discover what exists on the other side. It’s an eye-popping paradise featuring an abundance of food, plenty of cool, clean water and apparently no carnivorous creatures looking to eat all of them for lunch. Only one rule: Don’t eat the bananas.

That edict is courtesy of the Bettermans, Hope (Mann) and Phil (Dinklage). They and their inquisitive teenage daughter Dawn (Tran) are a bit more evolved than the Croods, and they appear to be the only ones living behind the wall. They’ve constructed a massive treehouse home with ample modern amenities, including a mesmerizing box called a “window” that Thunk Crood (Clark Duke) quickly becomes obsessed with. Additionally, Guy has unforeseen ties to the Bettermans that complicate his relationship with Eep, and the longer they both stay behind the wall the more unclear their future together as a couple sadly becomes.

If one thought the Croods’ first adventure was frantic and nonsensical, that’s nothing compared to what transpires in A New Age. The creatures are even stranger this time around, the comedy far more manic and the pop culture references, a DreamWorks trademark I wish the studio would put to rest, are aggressively prevalent. But as exasperating as some of this can be there is also an underlying sincerity to this follow-up I was instantly drawn to. Thanks to the talented cast a lot of the humor worked for me, and as relentlessly energetic as this sequel can be, I still spent the majority of my time watching it with a gigantic grin plastered on my face.

The best bits involve the female members of both families. Eep and Dawn’s blossoming friendship is authentically natural, and even when a bee sting transforms one of their hands into a massive inflatable balloon there is an empathetic grace to their relationship I absolutely loved. Meanwhile, even at its most outlandish the back and forth between Ugga and Hope is terrific, the latter’s horror to discover just how awful her passive-aggressiveness towards the Croods has been so beautifully handled (much of the credit there belonging to Mann) it brought an unexpected tear to my eye.

I wish Reynolds wasn’t the one handling the narration, his patented wiseass delivery starting to wear a little thin. Also, the climax is obnoxious to the nth degree, and while for the life of me I can’t decide if this is a positive or a negative, I will also state that this is the moment where the DreamWorks style of animated storytelling, mostly as it pertains to the use of popular music and overwrought hyperactive mayhem, is at its most egregiously jarring.

Maybe it’s the pandemic talking, but I still enjoyed The Croods: A New Age even if I didn’t respond nearly as positively to it as I did to its predecessor. Its heart is in the right place and the all-star vocal cast remains outstanding. There’s a visual ingenuity that’s undeniably impressive, and an extended sequence where Eep and Dawn jump things on a gigantic cat creature is one of the more delightful cinematic moments I’ve had the pleasure to watch this year. This sequel made me laugh, and considering all that’s happened in 2020 that might be its most wonderful trait of all. 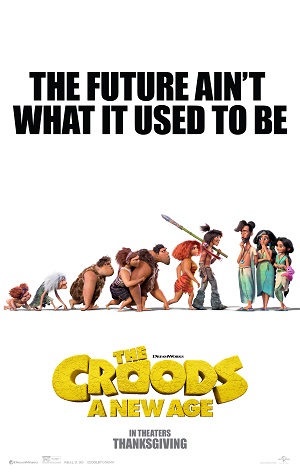