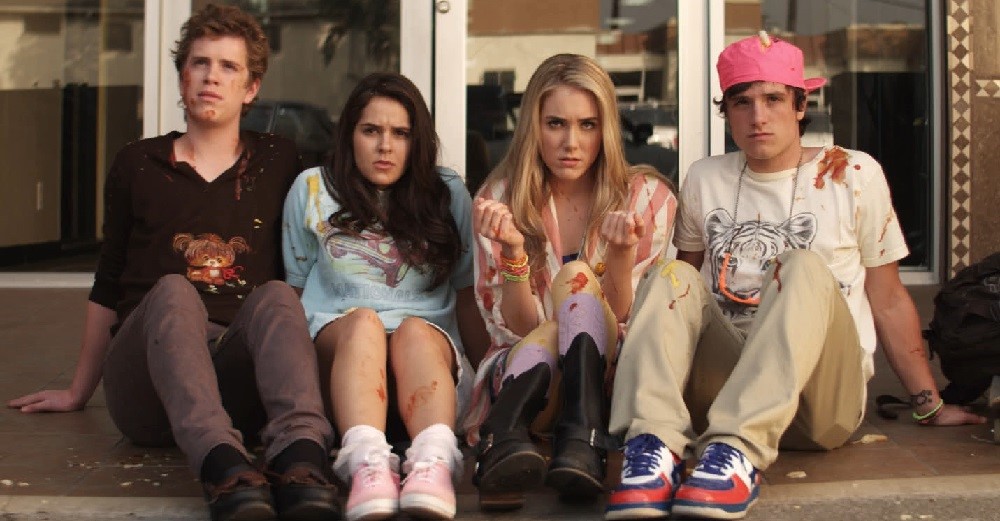 Something is wrong at Grizzly Lake High School. Slasher movie icon Cinderhella has apparently come to life, slicing and dicing the senior class, her sights now set on loser/loner/outsider Riley Jones (Shanley Caswell) much to the disbelief of the police, former best friend Ione (Spencer Locke) and popular, music obsessed too-cool-for-school fellow student Clapton Davis (Josh Hutcherson). Principal Verge (Dane Cook) is over all of this dismemberment, death and cynicism, and he’s putting all those he thinks might be involved in Saturday detention, even if doing so might unintentionally bring about the end of the world.

I saw Detention last Summer during the 2011 Seattle International Film Festival. Joseph Kahn’s second film after the hilariously awful Torque, a movie he happily owns for the terrifically terrible monstrosity it is, this genre-busting effort is so all over the place trying to make heads or tails of it is an absurdist impossibility. It breaks the mold and burns the roadmap, fearlessly pushing boundaries and going into nonsensical corners most films and filmmakers wouldn’t even dare of traipsing through.

Not that this is necessarily a good thing. The movie, written by Kahn and Mark Palermo, doesn’t even attempt to make a lick of sense, bending conventions and expectation so willy-nilly one almost wonders if they were making things up as they went along. This isn’t just some 1970s or early ‘80s Roger Corman-like hodgepodge of genre riffs (and rip-offs), it is instead its own distinctly original animal that takes the Scream concept and the Joss Whedon anachronistic esthetics of “Buffy the Vampire Slayer” and “Angel” and turns them on their head.

But as laudable as this is it just as clearly isn’t entirely successful. The story makes no sense at all, and by the time the body-switching and the time travel and the apocalyptic end-of-the-world ravings of an 18-year-old lunatic start happening I’d be surprised if half of the audience hadn’t already tuned out. It all feels like a series of loosely linked vignettes that on the surface feel like they’d be most at home as content on “Funny or Die,” and trying to take any of this seriously is a decided impossibility.

As for the other half of the audience, the ones keeping track of Kahn and Palermo’s whip-smart dialogue, the lines delivered at a fevered pitch by Caswell, Hutcherson (who also holds a producing credit), Locke and the rest of the cast, there’s a lot to share a blood-drenched malevolent kinship with. There are plenty of inspired sequences, not the least of which is the opening death of a popular high school hottie and a montage chronicling the time-traveling body-switching of a mother obsessed with her 1992 heyday and a daughter terrified to enter a dance competition.

It makes sense that the movie has spent about a year in distribution limbo. I get why it took so long for a studio to take a chance on throwing it out into the marketplace before shipping it off to DVD and Blu-ray where it will undoubtedly find a bit more life. Yet it is still nice to watch a gutsy independent bit of genre acrobatics that boldly dives into a pool of unknown depth seemingly uncaring whether or not it will survive up on the big screen. Detention is far from perfect, and as far as horror deconstructions go this week’s The Cabin in the Woods is far superior. But Kahn’s sophomore effort has guts and it cheekily goes for gory glory, both traits I do not personally take for granted and ones I think audiences open to this sort of thing will eagerly want to explore. 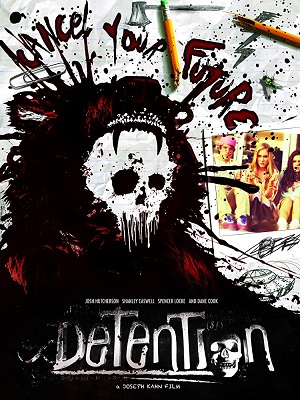