Director Stephen Frears has made a name for himself primarily with dark American and British thrillers like The Grifters, The Hit and Dangerous Liaisons. But his talents do not end there. Frears has also shown a key eye for observational drama and comedy with sublime efforts like My Beautiful Laundrette, Prick Up Your Ears, Sammy and Rosie Get Laid, The Snapper and High Fidelity.

But for a filmmaker this dynamic, Frears has had his share of outright stinkers. The most notable of these was the convoluted and misdirected adaptation of the Jekyll and Hyde myth, Mary Reilly, starring Julia Roberts, but almost as equally as inept were the director’s revisionist western Hi-Lo Country and the seriocomedy Hero with Dustin Hoffman and Andy Garcia.

With the 2002 Toronto Film Fest favorite Dirty Pretty Things, Frears returns to the realm of the bleakly menacing with gutsy bravado. While deeply unsettling and oozing in grit and grime – I felt like I needed a shower after getting out of the screening – this film still has much in common with many of the director’s best works, this thriller focusing on the immigrant underbelly of working-class Britain most don’t even know about let alone ever see.

London Taxi driver Okwe (Chiwetel Ejiofor) is an illegal Nigerian immigrant struggling to make ends meet. Not one for needing sleep, this proud man holds a second job working as the nighttime front desk receptionist and concierge at a seedy downtown hotel. Also working there is legal immigrant Senay (Audrey Tautou). Each morning as she comes in for her shift, she pretends to drop her keys on the floor for Okwe to pick up, letting the Nigerian use her flat clandestinely as a place to rest.

One night the resident callgirl Juliette (Sophie Okonedo) informs Okwe that the room she’s just utilized for the evening could use some cleaning. What he finds is beyond disturbing. Stuffed in the toilet is a human organ, freshly cut from a living body.

But what can he do? After informing the hotel manager Juan (Sergi López), Okwe is politely informed that the repercussions to him could monumental if this matter is reported to the police. Seeing he’s an illegal immigrant, authorities would likely be understandably suspicious if the Nigerian exile told anyone what was going on at the hotel after hours.

Frears and screenwriter Steven Knight have crafted an elegantly grimy suspense flick that digs under the skin like the sweat from a hard day of physical labor. The duo also put together a complex character study of people just below the underbelly of a capitalistic society. This is a London unlike anything I’ve ever seen before, and Frears pays intimate attention to every little detail as he attempts to give this story life.

Ejiofor is astonishing as Okwe. The actor has what is essentially his first leading role (he had a small part in Steven Spielberg’s Amistad) and more than makes the most of the opportunity, He imbues Okwe with a stern and quiet determination that’s compelling. It’s a spellbinding performance of dizzying depth, and Ejiofor twists his performance into something instinctually primal as events hurtle towards their earthshattering conclusion.

Both López and Tautou are also strong. It is nice to see the wondrously gifted Tautou delve into something much darker and existential after playing the carefree and colorful lead character in Amelie. As for López, he once again nails a villainous character who oozes menace, hiding a demonic soul behind a cheerful façade.

There are one or two plot twists I maybe could have done without. Yet this remains such a fascinating look into a twistedly dark mirror and features performances so richly compelling all my various nitpicks vanished into nothingness. Frears handles all of the various narrative elements adroitly, slowly turning the screws with such precision that the final moments come as far more of a surprise than they maybe have any right to.

There is so much to like about Dirty Pretty Things it almost begs to be seen twice. Not since Fargo has a character study masked as a thriller been so compelling, and while I wouldn’t at this point rank it as high as that Coen Brothers’ masterpiece, that doesn’t make what Frears has accomplished any less amazing. This is one of the year’s best films. 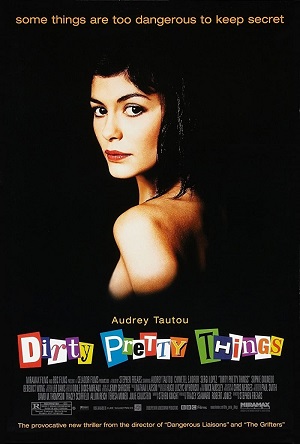