Gritty Dredd Guilty of Being Forgettable

Be that as it may, even I can tell that screenwriter Alex Garland (28 Days Later, Never Let Me Go) and director Pete Travis (Vantage Point) have constructed a version with Dredd that’s far more authentic to the source material than the unintentionally hilarious 1995 version with Sylvester Stallone ever could have hoped to be. Gritty, oozing in grime, filled with stylized visuals and punchy, ear-shattering sonic effects, the movie is a nasty piece of work dripping in violent nihilism. It takes no prisoners and is resolute in its unapologetic embracing of the character, fearlessly marching to its own militaristic beat of ripped out jugulars, severed limbs and flattened gooey corpses.

If only I had enjoyed myself while watching all this mayhem instead of being slightly bored then there might have been something for me to talk about. For all its technical virtues, this movie is nothing more than an over-stylized, thinly plotted remake of The Raid: Redemption, the two films following almost identical paths before reaching a bone-cracking resolution with all the emotional heft of an iron spike driven through an ankle.

Much like that Gareth Huw Evans actioner, it’s easy to be impressed by Dredd, and it’s almost certain genre fans will be entertained. Yet I’m not entirely certain I see what all the fuss is about, and much like the Stallone version from ‘95 I’m close to positive I’ll be forgetting the majority of this latest version sooner rather than later.

It doesn’t help that Travis shoots large portions of the midsection more like a first-person video game, making comparisons to the ill-fated Doom almost unavoidable. This was one those times where I wished I had the controller in my hand and wasn’t being forced to watch someone else play, and at times the whole thing looks like nothing more than a PlayStation 3 meets X-Box greatest hits highlight reel more than it does anything substantive.

The story revolves around Judge Dredd (Karl Urban), a fearless upholder of the law roaming the streets of Mega City One doling out justice as he sees fit. In this barren, overcrowded dystopian future he and his fellow Judges are all that stands between peace and chaos, those who get in his way nothing more than foolish imbeciles digging an early grave for themselves to lie in.

Tasked with training psychic rookie Anderson (Olivia Thirlby), events conspire to put the pair smack-dab in the middle of the Peach Tree mega-block, a 200-story complex controlled by a vicious drug lord known only as Ma-Ma (Lena Headey). She wants the Judges dead, needs to see their lifeless bodies so she can protect her turf and maintain her power. With no escape and no hope for backup, Dredd and Anderson must make their way up floor-by-perilous-floor to the top of Peach Tree and into Ma-Ma’s stronghold, the entire mega-block out for their heads to appease the bloodthirsty matron who controls every facet of their humdrum lives.

I liked how aggressively nasty Garland’s script is. I appreciate that he doesn’t pull his punches or gloss over any of the seedier aspects of the scenario he’s constructed for the heroes to try and survive. Even so, that this film follows so closely on the heels of The Raid: Redemption doesn’t do it any favors, and Travis’ somewhat frenzied handling of the material for me ended up something of a minor distraction.

Urban embraces the character, and for the second time this week I’ve ended up sitting through a movie where the main character tends to express himself most honestly in a series of grunts and growls than he does with his abbreviated use of the English language (Trouble with the Curve being the other). Even with his face shrouded by his helmet (a fact sure to please the fans), there’s something about Urban that’s hypnotic, and as violence-prone antiheroes go his work as Judge Dredd is extremely impressive.

I’m still not entirely sure I get why this action effort has been receiving as many accolades as it has. Nothing all that interesting happens, and as far as surprises go, there aren’t very many of them. While the visuals are impressive, even at a midnight screening filled with enthusiasts ready to hoot and holler at every crazy, blood-splattered moment there wasn’t much that got my pulse racing particularly fast. Dredd didn’t do much for me, and while my final judgment is hardly as negative as it could have been, that doesn’t mean my passing of sentence labeling the film as forgettable is an endorsement people should purchase a ticket to see it in a theatre. 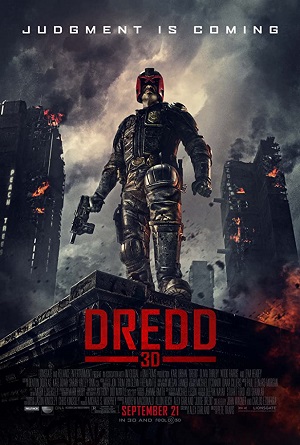