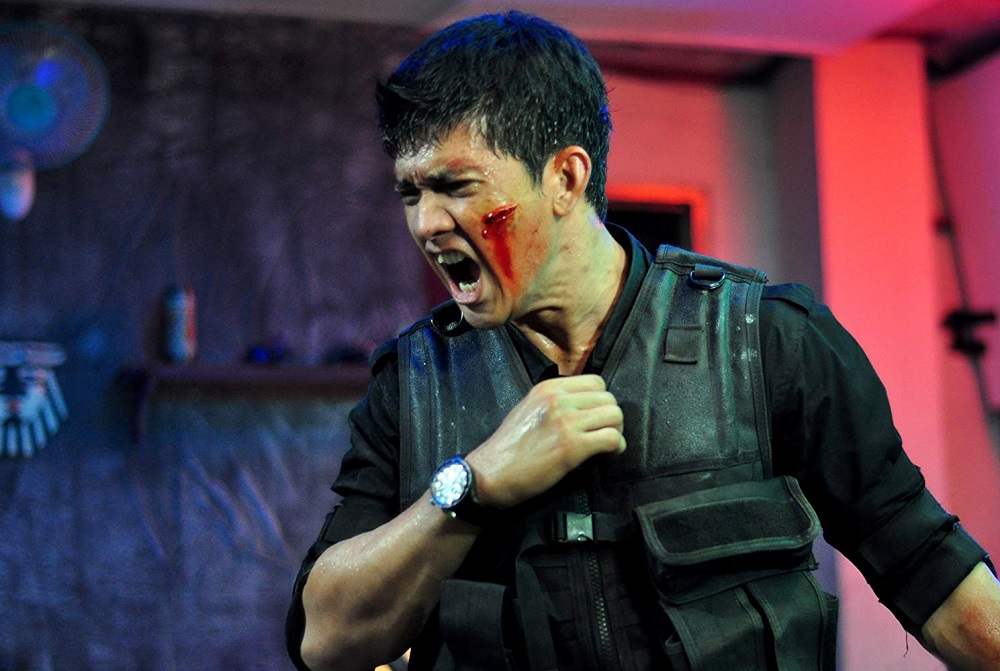 A lot of people are doing cartwheels over the bizarrely titled The Raid: Redemption (I get why it’s called The Raid, it’s the ‘Redemption’ part that makes no sense) and it’s easy to see why. Seldom do I sit in a movie theatre feeling my chest lump up into my throat. Rarely do fisticuffs and intricate fits of martial arts mayhem make me audibly cringe right into the center of my seat. This movie had me shrieking. This movie had me yelping. And, by the time it was over, I felt as bruised and battered as its beleaguered hero, almost wishing the publicist had a brought along a stretcher so I could be wheeled out on it instead of walking into the sunlight on my own accord.

But while the Indonesian import is light years better than writer, editor and director Gareth Huw Evans and fight choreographer and star Iko Uwais’ freshman effort Merantau, it’s still far from perfect, and for all the intensely insane hand-to-hand action pyrotechnics the story holding it all together is so threadbare it might as well not even exist in the first place. The filmmakers do little with the purposely simple premise, instead choosing to run on clichés in hopes the audience will be distracted by the visual audacity of what they’ve put up on the screen, pumping up the volume and accelerating the action in order to hide a scenario barely worthy of all the effort.

In all fairness, considering how I usually tend to be a sucker for just this sort of thing I should be joining all of the film’s numerous enthusiasts doing those euphoric summersaults. One part Rio Bravo, another Assault on Precinct 13, the movie is a hardcore martial arts rock’em-sock’em adult playground filled with moments too pugnaciously awesome to even attempt to describe. Like classic Jackie Chan, I found myself repeatedly wondering how the heck they pulled off stunt after stunt, people flipping, falling and flying all over the place to the point the line between what was done practically and what was aided by either wires or CGI (or both) becomes virtually nonexistent.

The plot? A team of elite, specially trained police officers are tasked to covertly enter a massive apartment building lorded over by the brutal Boss Tama (Ray Sahetaphy) and bring him back to justice, dead or alive. Rookie officer Rama (Uwais) realizes something is wrong early on, and the only reason he survives after his team is discovered in the building is thanks to his unit’s headstrong commander Jaka (Joe Taslim) ordering him to fall back to the rear and provide protection for his fellow rookies.

I’m sure you can figure out the rest from there. Jaka and two others manage to make it out of the initial melee alive, while Rama bravely protects a fallen comrade, also a rookie, promising to get him out of the building no matter what. Tama sends his two best killers, the unimaginatively named Mad Dog (Yayan Ruhian) and the mysterious Andi (Doni Alamsyah), to ferret out the survivors, while also offering lifelong rent-free sanctuary to any of the building’s tenants who bring him the heads of the policemen infesting his happy home. Rama must go from floor to floor to floor trying to find a way to complete his mission and to make it out of this rundown hellhole alive, engaging in a series of never-ending battles with a variety of opponents as he does so.

Even with a premise as basic and as simple as this it still feels like Evans couldn’t care less about trying to make something interesting out of it. All he appears to care about is how many bodies will hit the floor, how many attackers Uwais, Taslim and the others can take on before exhaustion leads to their demise. He throws in a random plot twist regarding one of Tama’s lieutenants, but he so clearly telegraphs it that when it happens I can’t say it came as a surprise. Worse, it’s so matter-of-fact, so one-dimensional, any chance for an emotional investment in the characters or their plight due to this revelation never develops, the movie remaining dramatically at arm’s length for its full duration.

I still can’t be too hard on the film. Magnificently shot by Matt Flannery (who also lensed Merantau) and superbly edited by the director, Evans understands how to make his action scenes sing in ways that feel intimate and raw. He loves long takes, allowing all of Uwais’ stunning fight choreography to crackle and sizzle like it wouldn’t have been able to otherwise, and as I already stated sitting in the theatre I felt like every blow, every strike and every kick was smacking across the face once all of the violent chaos began.

Had Evans spent as much time making Rama, Jaka, Andi and the others interesting characters, had he exerted a little effort building up their relationships and making what happens matter, maybe I’d be willing to put this movie up on the same pedestal as those aforementioned Howard Hawks and John Carpenter classics. As it is, while the action choreography is impressive, emotionally I’m finding it difficult to care, The Raid: Redemption never quite connecting on anything more than a purely visceral level and nothing more. 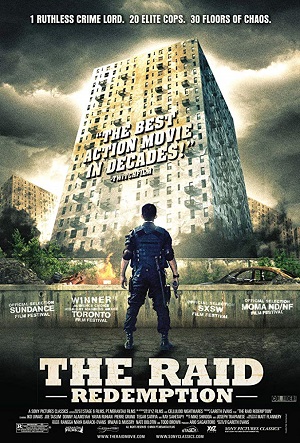