Elvis is undeniably a motion picture directed by Baz Luhrmann. The Aussie wild man behind Moulin Rouge! and The Great Gatsby strikes again, this explosively colorful exercise in music, momentum, and visual carnage an eye-popping hagiographic look at one of the most iconic musical figures of the 20th century. This drama is absolutely nuts, and those who were expecting anything otherwise likely have no idea who Luhrmann is or have seen any of the insane love-them-or-hate-them titles that make up the bulk of his filmography.

Is this a biography of Elvis Presley? Not sure I’d go that far. The screenplay written by Luhrmann, Sam Bromell, Craig Pearce (Strictly Ballroom), and Jeremy Doner (Heartbreaker) is a burst of volcanic potpourri, bouncing through signature moments in Presley’s life with a cartoonish urgency that’s both spectacular and obnoxious. I’m in the camp stating that the former adjective wins out over the latter, but it’s a pretty close race, and I have no idea what general audiences are going to think when they get a look at the film for themselves.

It should be noted that the story is told by an unreliable narrator, and that is entirely by design. Luhrmann allows Presley’s longtime promoter and manager Colonel Tom Parker (Tom Hanks) to tell this tale, and he gets to do so while seemingly breathing his last gasps of oxygen from a tiny Las Vegas hospital room as he cravenly clings onto life. This is a man who has his reasons to sell this saga in the way he does, attempting to color himself as the hero of this saga and not the abhorrent rogue he believes history has judged him to be.

This is a cagey bit of misdirection on Luhrmann’s part, because not only does it make Presley’s larger-than-life persona leap off the screen, it makes Parker more of a craven, inhuman monster than any straightforward biography of the singer likely ever could have accomplished. He’s a nasty piece of work, a sly bottom feeder who knows how to bend every opportunity or obstacle strangely in his favor. Parker is the supervillain of the piece, the duplicitous and savvy Lex Luther to Presley’s wholesome and talented Superman.

Safe to say that description helps explain Hanks’s unhinged, loopily carnivorous performance as Parker. For those who felt the two-time Academy Award winner no longer could get back in touch with the inspired comedic insanity of his early days in Hollywood, they won’t know what hit them watching him here. Hanks goes for broke. From the bizarre accent to his rickety physicality, from the gruesome makeup effects to the pugnaciously slovenly wardrobe choices, the actor revels in the disgusting depravity as if he were a hog gleefully rutting in the mud.

But where some will find Hanks awful as parker and others will undoubtedly call what he’s doing positively brilliant, I do not think there will be any such debate as it comes to youngster Austin Butler. He is superb as Presley. So terrific I almost can’t put into words just how spectacular he is. In all the noise, with all of the manic activity Luhrmann orchestrates with malevolent gusto that surrounds him, the actor still towers above the fray with overpoweringly charismatic gusto. This is a soulful portrait of a determined artist being ripped into a myriad of pieces by forces far beyond his control, Butler commanding the screen from the second Elvis walks upon the stage to the last moment this singer and showman makes his tragic farewell.

Is there a plot? Sort of. It’s clear Luhrmann is more interested in mythmaking, era-hopping, and genre-melding than he is in trying to dig all that deeply into the complex cultural, racial, and political realities of Presley’s life. But the basic throughline is the relationship between Colonel Parker and his talented star, the social upheaval of the 1950s, ‘60s, and 70’s passing by as if there were in the rearview mirror of a speeding Pink Cadillac racing towards a final destination located in the sweltering deserts just outside of Las Vegas.

Olivia DeJonge makes a notable impression as Priscilla Presley, as does an excellent Kelvin Harrison Jr. in an all-too-brief appearance as the immortal B.B. King. It’s hard to say the same about Helen Thomson, Richard Roxburgh, David Wenham, and Kodi Smit-McPhee. But although none of them are relegated entirely to background status, each does have at least one or two standout moments, especially Thomson as Presley’s beloved mother Gladys.

Granted, it would be difficult for any actor, even ones as talented as the ensemble Luhrmann has employed here, to stand out amidst all the audio and visual freneticism. But much like Romeo + Juliet or the groundbreaking Moulin Rouge!, there is a method to the director’s madness. He unleashes his creative team in ways that frequently astonish, combining eras of music like a mad genius while allowing director of photography Mandy Walker’s (Mulan) expressive camera to spin this way and that like a whirling dervish. The whole thing is a technical marvel from top to bottom, every penny of the production budget up on the screen for the entire audience to see.

Luhrmann’s films continue to be an acquired taste. Each one is like watching a filmmaker attempt to capture lightning in a bottle, the razzle and the dazzle working overtime to coexist even during the moments where neither complements the other in any way whatsoever. This is Elvis in a nutshell, and if this overheated phantasmagorical whirligig didn’t quite set my heart on fire, thanks in large part to Butler’s mesmerizing magnificence, I still couldn’t have stopped falling in love with the finished product even had I wanted to try. 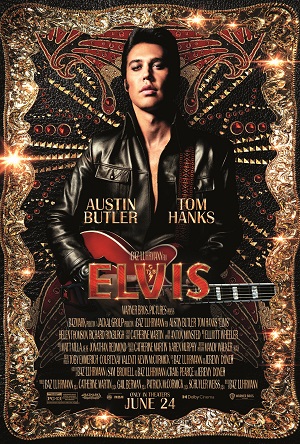