After leaving what he dubbed a “U.F.O. death cult” years ago, Justin Smith and his slightly more gullible brother Aaron (writer/directors Justin Benson and Aaron Moorhead) are the recipients of an oddly cryptic message that leads them to head back to their old stomping ground to see if anything has changed. Once in the middle of Californian nowhere, they discover they are welcomed back to Camp Arcadia with open arms, a somewhat surprising turn of events considering the terms they left things on when they escaped a decade prior. But the camp’s leader Hal (Tate Ellington) gives the brothers free reign to explore as they will, his motivations for doing so ones he’s not in the mood reveal.

The strangest thing about all of this? The denizens of Camp Arcadia were supposed to have killed themselves ten years ago. Instead, they’re seemingly living in a back-to-nature utopia, making their own home-brewed beer, growing their own food and spending countless hours on arts and crafts. But something even more unexplainable is going on, a growing list of surreal phenomena Justin becomes determined to uncover the truth behind. But as things grow increasingly unhinged it becomes apparent the brothers are on the verge of getting lost within the machinations of the cult they previously worked so hard to escape, the truths they believe they’re discovering potentially leading to answers they maybe didn’t want to know.

Less is more where it comes to the genre films of Benson and Moorhead. Their 2012 debut Resolution was a small-scale wonder, building in frightfully unnerving power as it craftily made its way to its sinister conclusion. Their terrifying 2014 follow-up Spring was even more impressive, the way the pair slowly suckered the viewer into their romantically intoxicating maze only to trap them inside their Lovecraft-inspired labyrinth close to spectacular. Now they return with what might be their most fascinating effort yet, the family-centric apocalyptic dialogue-driven spectacle The Endless, a movie where knowing as little as possible before the curtain opens and the lights go down is an almost absolute guarantee an audience member is about to have one heck of a creepily petrifying good time.

Not all of what transpires makes perfect sense, and I can’t help but think that’s by design. As events spiral out of control and the weirdness escalates, Benson and Moorhead craft a phantasmagoric wonderland that’s as carefully constructed as it also feels utterly of the moment, almost as if what has transpired was conjured up by the filmmakers at the exact moment their cameras started filming. It’s all like some strange, exhilarating devil-may-care melding of something like Mike Cahill and Brit Marling’s lo-fi science fiction marvel Another Earth, Don Coscarelli’s unclassifiable, psychologically unbalanced creature-feature John Dies at the End and a Joe Swanberg mumblecore comedy like Drinking Buddies or Happy Christmas. Up is down. Left is right. Good loves Evil while Evil brings you roses and a box of chocolates wearing its best suit as it takes you out on a first date at a fancy restaurant.

At the core sit these two brothers, and while Benson and Moorhead aren’t the best actors I’ve ever watched carry a film from start to finish, that doesn’t make them any less perfect to play the two Smith boys. They have a relaxed, unforced energy that allows their mutual affection for one another to carry an authentic gravitas that only grows in stature and significance as things go on. The writing can feel a little mannered, especially as it pertains to the dialogue, and yet, coming out of the mouths of these two it can’t help but work, Benson and Moorhead making an oddly magnetic pair to focus all of this peculiar time-bending zaniness upon.

When I say “zany” I’m not kidding. Benson and Moorhead take their obvious adoration of all things Lovecraft to a realm that’s close to unclassifiable. More, they do it on what is obviously a minimal budget, creatively utilizing all that is at their immediate disposal to craft a visually imaginative whirligig of sensation and emotional elasticity that’s continually fascinating. They even somehow tie things back to their debut Resolution, and while I wouldn’t call this effort a direct sequel to that far more self-contained chiller, the two films are still sitting comfortably inside an exceedingly similar ballpark.

The pacing can feel a little out-of-whack, and while I’ve purposefully refrained from talking about any of the secondary characters I should also mention that no other actor makes anything of a memorable impact no matter how important they might be as far as assisting Justin and Aaron in their quest for answers. Even so, there are moments that are gleefully petrifying, Benson and Moorhead showing a directorial confidence that’s impressive start to finish. The Endless goes places that are both eerily unexpected and emotionally affecting, the all-encompassing monstrous beauty of this spellbinding sci-fi thriller impossible to understate. 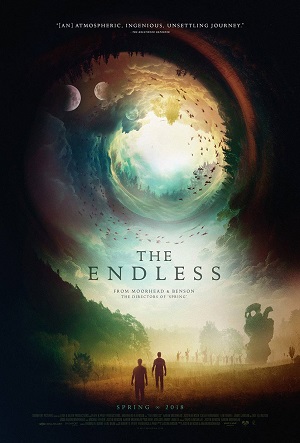