Eternal Sunshine of the Spotless Mind (2004)

Charlie Kaufman is the most innovative screenwriter working today. Even if all he had on his resume was the one-two punch of Spike Jonze’s Adaptation and Being John Malkovich, they alone would be enough to rate the writer an innovator. Throw in lucidly loony scripts for Confessions of a Dangerous Mind and Human Nature, Kaufman hasn’t yet met a convention he’s not willing to bend on its ear.

Granted, those latter two aren’t near as successful as the Jonze efforts, but that still doesn’t diminish their uniqueness or subversive indiscretion. If anything, the only weakness you could throw at Kaufman is that his movies tend to lack in the way of a heart. Adaptation might have been a wittily original satire of the writing process, but that still doesn’t mean there were any characters a person could go all warm and fuzzy investing in emotionally.

That all changes with the writer’s latest head-trip Eternal Sunshine of the Spotless Mind. Reuniting with Human Nature director Michel Gondry, Kaufman once again dares to go into a twisted universe that is uniquely his own. But where this film easily could have been nothing more than a shimmering showcase of visual and sensory imagination, both writer and director manage to discover the most intimate of emotions boiling within the center of the human psyche, the flowers of love’s wistful effervescent chicanery blossoming across the screen. It’s only March, but I’m still ready to proclaim that this will be one of the best three or four motion pictures I see in all of 2004.

Mild-mannered Joel Barish (Jim Carrey) is stunned to discover his flighty girlfriend Clementine Kruczynski (Kate Winslet) has had all memories of their relationship erased. Impossible? Not so according to Dr. Howard Mierzwiak (Tom Wilkinson), inventor of the process and the one who performed the procedure on Joel’s now clueless ex. He and his crew of technicians, the nerdy Stan (Mark Ruffalo), the needy Patrick (Elijah Wood), the iridescently cheerful Mary (Kirsten Dunst), slowly convince the infuriated and befuddled man this could be just the thing to get the girl literally out of his head. After all, if Clementine could do it to him, why shouldn’t Joel do just the same thing to her?

But as memories start vanishing, the once upset ex-boyfriend rediscovers how much he loves Clementine and just how dear those memories, both good and bad, of their time together mean to him. Deep inside his brain Joel attempts to escape the procedure, hiding Clementine within other memories ranging from childhood trauma to baby bath-time. Much like a cerebrally infatuated Sherlock Holmes, Dr. Mierzwiak tries to track down each offending memory of his relationship in order to obliterate them, and in doing so it becomes increasingly clear to Joe that Clementine is that special type of girl you just can’t get out of your head.

Combining elements of Phillip K. Dick, Stanley Kubrick and Charlie Chaplin, Kaufman and Gondry have constructed a picture that’s as unique as it is timeless. This is a wondrous experience that only comes around once in blue moon, each facet of the narrative working in exhilarating tandem with one another to create a deliriously dynamic whole that’s continually mesmerizing. What makes the film so compellingly brilliant is the thunderously rhapsodic beating heart thumping right at the center of things, the filmmakers deftly diving into the perplexing insanity of love and romance with confident authority.

Gondry’s direction is superb. After the rather ponderous Human Nature I was nowhere near prepared for his majestic and stylistically controlled work handling Kaufman’s inspired screenplay. Nothing happens in this movie that doesn’t have his stylistic imprint all of over it, including Ellen Kuras’ stellar cinematography and editor Valdís Óskarsdóttir’s dynamite cutting of the material. Gondry’s bold handling of all of this is positively stellar, his whimsical touch leaving a mark so genuine and pure my heart soars just thinking about it all against here now while writing this review.

Winslet, playing what is easily the picture’s toughest role, soars as the ephemeral Clementine. What is so amazing about her work is that the part as written isn’t a flesh and blood human being but instead a composite of all the good, bad and indifferent memories of an increasingly stressed-out ex-boyfriend. It is a role built completely inside the head of someone else, yet Winslet fleshes her out magnificently, Clementine a songbird of human emotional attachment so iridescent it is easy to see why Joel fights so hard to keep the memory of her alive.

Ruffalo, Wood and Wilkinson all turn in bitingly acerbic supporting turns, while Carrey commands with one of his most self-assured performances to date. Matching his career-best work in The Truman Show and The Man in the Moon, the “In Living Color” veteran once more shows just how good an actor he can be when he sets his mind to it. Whether playing a diminutive Joel hiding under a kitchen table, or kicking in exasperated fury on a snow-filled beach, Carrey’s performance is so stupendous I forgot I was watching the formerly loathsome Ace Ventura and became completely captivated by Joel and his plight, the actor journeying through so many different emotional peaks in valleys at various times it is almost impossible to keep up with him.

When the final seconds of Kaufman’s screenplay twist back in on themselves I wanted to stand up and cheer. This is a rare instance when style and visual razzle-dazzle do not diminish the emotional cathartic core lying at the center of the piece. For all the quirky visuals, love the car falling from the sky and the beachside home literally coming apart at the seams, Kaufman doesn’t forget to make us care for those souls attempting to ride the waves of his story. It’s a beautiful screenplay overflowing with moments of such sudden, tight-fisted insanity that frequently knocked my socks off, all of its coupled with a poignant purity that’s beyond terrific. As early-year movies go, Eternal Sunshine of the Spotless Mind isn’t just a surprise, it’s a bona fide cinematic miracle I’m not ever going to forget. 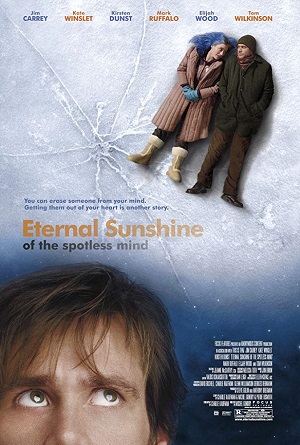