Evil Dead has more plot than its 1981 precursor The Evil Dead, i.e. the movie that forever planted writer/director Sam Raimi and star Bruce Campbell on the cinematic map, but that doesn’t mean this remake/reimagining/reinvention is any more complex, convoluted or has heck of a lot additional on its mind. Let’s be clear, this version, like its predecessor, involves five rather one-dimensional college-aged friends stuck in a secluded cabin in the middle of the woods beset by rampaging demons unintentionally released by them after they discover a tome made out of human skin, ominously known as  the ‘Book of the Dead.’ From that point on, multiple possessions, dismemberments and the flushing of all kinds of bodily fluids grotesquely ensues. 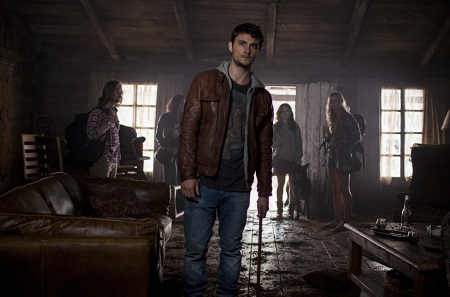 Was this new version of the now-classic tale necessary? No, not in the slightest. But under the guidance of Raimi, Campbell and Rob Tapert, a fellow veteran of both The Evil Dead and Evil Dead 2: Dead By Dawn, new director Fede Alvarez, co-writing the script with Rodo Sayagues, has managed to bring to the screen a new vision of this unmerciful tale of possession and terror, inspired sequences of indescribable gore flowing freely throughout. For a film that has not right to work, especially considering how three decades of imitations and knock-offs have sullied the waters, this Evil Dead proves to be a thrilling throwback I almost couldn’t help but get a massive kick from.

In an attempt to strengthen the plot strands (if only a little bit), the reasons our five unsuspecting victims find themselves suddenly stranded in the middle of the deep, dark woods is decidedly genuine. David (Shiloh Fernandez) has returned to his family’s mountain cabin with his girlfriend Natalie (Elizabeth Blackmore) in tow for the first time in years, there to assist former friends academic Eric (Lou Taylor Pucci) and trauma unit nurse Olivia (Jessica Lucas) in their attempt to help his embattled younger sister Mia (Jane Levy) kick a fairly nasty drug habit. While there, they discover their fair share of horrific things (including a cavalcade of dead cats in the basement), the least of which is the aforementioned Book of the Dead. Eric, being the curious sort, eschewing the warnings of a series of scribbled warnings, reads from the pages, and unsurprisingly from that point forward all sorts of deranged blood-splattered chaos unrelentingly ensues.

I get what the two Uruguayan filmmakers, Sayagues and Alvarez, were going for here, and I appreciate that they wanted to ground the horrific events to come in something earthbound and familial. The emotional heart of the picture does ring true, making many of David’s actions as they pertain to his estranged sister Mia at least somewhat believable.

At the same time, it’s not like the pair are channeling Noah Baumbach here, and it isn’t like their attempts towards giving their quintet of characters something akin to three-dimensionality moves all that far beyond surface level. These five are nearly just as nondescript as the ones found in the 1981 original, and even if David is a more internally nuanced character than Campbell’s heroic Ash was that doesn’t make him all that more interesting when all is said and done.

No, much like Raimi’s trio of cult favorites, 1992’s Army of Darkness being the final installment as of this writing (a fourth chapter, even with this ‘remake’ now hitting theatres, is still rumored to be forthcoming), the reason for watching the film has everything to do with the imaginative and inspired gore effects, and on that front Sayagues does not disappoint. While dripping with blood, while filled with grisly images even the most hardened genre fan will find themselves aching to turn away from, what is most ingenious about all of this is just how much the director leaves to the imagination, the viewer’s ideas of what has happened to whom and why far more disturbing than anything he or his talented team of effects artists ever could have realized visually. 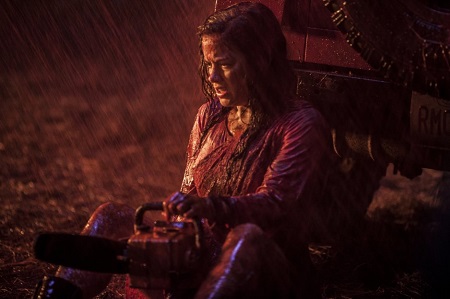 Not that the film doesn’t earn its R-rating. It does and then some, pushing the boundaries of the MPAA’s system to their absolute breaking point. There are sequences here that had me gripping my armrests while my palms excitedly dripped with sweat, and by the time the red rain (literally) began to fall I couldn’t wait to see what Sayagues and company had up their collective sleeves next. The final climactic moments are disturbingly sensational, the lengths one characters goes to survive and (hopefully, you never know, after all) save the day for the human race as a whole almost beyond belief.

There’s not a ton more to say. I can’t say this Evil Dead will be as revered or as influential as its predecessor, but that doesn’t mean it isn’t without merit. Alvarez proves to be a horror filmmaker with passion, energy, style and vision, taking the Raimi/Campbell/Tapert concept into twisted new territory while at the same time paying just homage to the original trilogy at the exact same time. The simple truth is that the not-really-a-remake-remake works, plain and simple, and for fans of this sort of thing that’s all you really need to know. 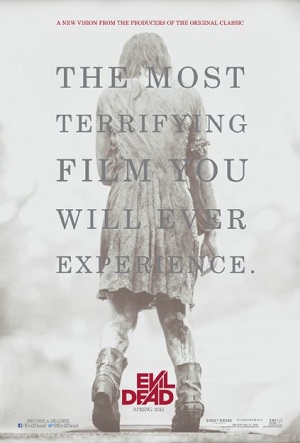