F9 begins with Dominic Toretto (Vin Diesel) living on a secluded farm, raising the son he never knew he had until recently, alongside his beloved Letty (Michelle Rodriguez). Roman (Tyrese Gibson), Tej (Chris “Ludacris” Bridges) and Ramsey (Nathalie Emmanuel) arrive announced with a message from Mr. Nobody (Kurt Russell): his plane has crashed in the middle of war-torn nowhere, and it also appears cybercriminal Cipher (Charlize Theron) has escaped.

Dom figures out that the shadowy figure behind this international mystery is his estranged younger brother Jakob (John Cena). He’s working for the son, Otto (Thue Ersted Rasmussen), of a billionaire dictator. Jakob wants to get his hands on a secret high-tech device split into three parts that will give him total control of the planet’s cybernetic infrastructure, including nuclear missile sites.

Wait, there’s more! Mia (Jordana Brewster) is back in the crime-fighting fold now that she knows Jakob is in the picture, fast-driving thief Queenie (Helen Mirren) has valuable information — and some parental advice — for Dom, Shad (Lucas Black) and Twinkie (Shad Moss) have given up drift racing in Tokyo to build rockets, and government agent Stasiak (Shea Whigham) gives everyone a free ride to London.

Oh. Yeah. Han (Sung Kang) isn’t dead, and the young woman (Anna Sawai) he’s spent the past few years secretly being a surrogate father to is the key to Jakob and Otto’s plan for world cybernetic domination.

The Fast & Furious films are just as outlandish and as insane as ever. Featuring an obnoxiously convoluted plot, a purposefully melodramatic backstory (including flashbacks) and a seemingly never-ending series of crazy, CGI-augmented stunts that are literally out of this world, there’s precious little for this franchise to do next.

Granted, with a reported two more installments to go, it’s a solid guess that producer-star Diesel and returning director Justin Lin are going to do their darndest to prove me wrong. Still, while I’m more than willing to ride or die with a whole heck of a lot, my patience for this series and all its larger-than-life permutations is wearing noticeably thin. I’m finding it increasingly difficult to care about any of this, and if Fast Five and Fast & Furious 6 put Dominic Toretto and clan back on solid ground, F9 comes close to speeding the series right off the side of a cliff.

Not that a cliff is much of an obstacle for this crew. But the metaphor still stands. There is a lot of movie in this movie, and almost all of it is as brain-dead as the central plot itself proves to be. Not that I expect subtlety from these car-filled adventures, even if it would be nice if I didn’t feel like watching them was transforming me into a monosyllabic dimwit with each passing second.

I do still love this cast, and I appreciate that Lin allows a few of the characters, most notably Roman, to ruminate on how far they’ve all come from their days stealing DVD players on California highways and going undercover in Florida to con a low-level drug dealer. Now we’re stopping worldwide Armageddon and bringing down satellites courtesy of a souped-up Pontiac Fiero.

There are also a handful of undeniably spectacular action sequences, not the least of which is that opening jungle search for Mr. Nobody, which quickly descends into explosive vehicular madness culminating in a plane armed with a powerful magnet and a unique bridge jump that’s a slingshot of inventive psychosis. Han’s reintroduction is handled nicely, and a brawny set piece inside an underground bunker is a bruising bout of fisticuffs that almost equals the epic Dwayne Johnson/Jason Statham smackdown from Fate of the Furious.

Fans know what to expect from these films, and I doubt they will leave the theater disappointed. There are explosions. There are cool cars. There are some decent jokes. Many of the performances are solid. The word “family” is uttered repeatedly, so those playing a drinking game every time the word is stated can anticipate being suitably hammered long before the midway point.

But all this is starting to grow a little stale as far as I’m concerned. F9 takes the saga to a place that’s out of this world, and even that wasn’t enough to maintain my interest for all 145 minutes. The tank for this series is starting to run empty, and I’m not sure Lin and Diesel are going to be able to generate enough fresh ideas to pay for a refill. 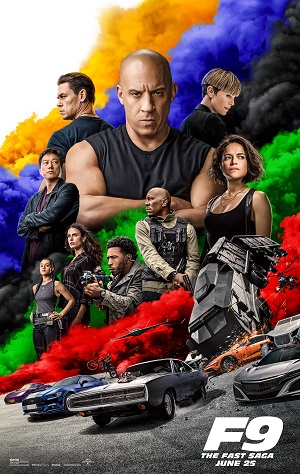