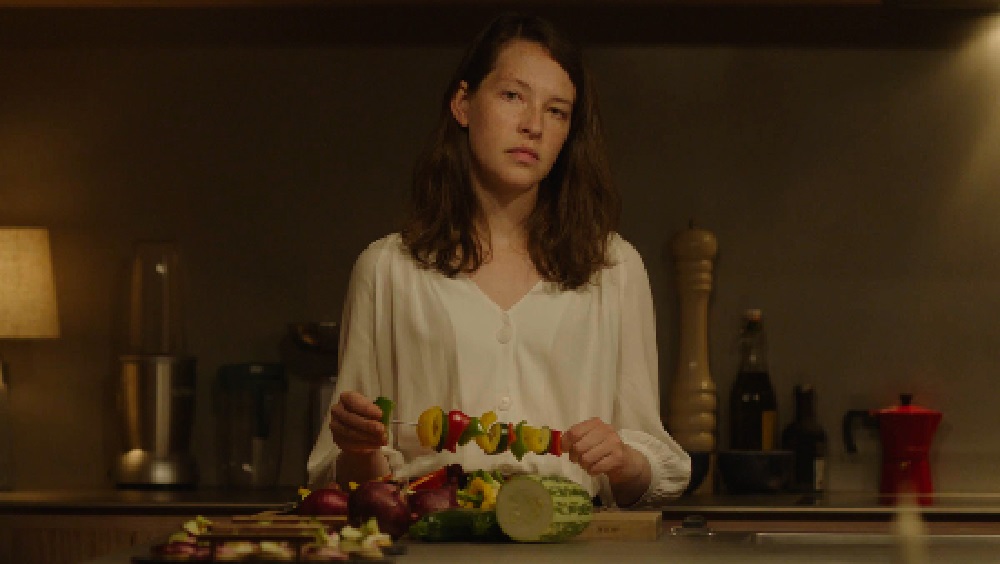 Born from Welsh folklore, director Lee Haven Jones and writer Roger Williams deliver a horrifyingly unsettling dinner party with The Feast. A supernatural commentary on humanity’s relationship with the plants and creatures of the Earth, and the gruesome repercussions when Nature rises up to deal with those who have wronged her, this film is a slow-burn descent into brutal vengeance and silent dread that quickly got under my skin.

Glenda (Nia Roberts) is frantically getting ready for a big night. Spending some time away from the hustle and bustle of the city, she and the rest of the family – her member of Parliament husband Gwyn (Julian Lewis Jones) and two sons Guto (Steffan Cennydd) and Gweirydd (Sion Alun Davies) – have escaped to their expensive home in the Welsh countryside for a working vacation. They are preparing a lavish dinner for their farmer neighbors, hoping to convince them to allow mining on their land, most notably a secluded section of pristine wilderness that cuts through both of their properties.

Cadi (Annes Elwy) is the hired help for the evening. She arrives late and not in a car, walking up the driveway in a disheveled state. Glenda is the only family member to make note of the young woman’s appearance, mainly because she realizes she’ll have to clean herself up before she can start working. Later on, Cadi observes the family while helping prepare for their party, almost as if she is judging them, for what reason no one but her can know.

It’s not a spoiler to say that Cadi is not who she appears to be. What she is, however, I will not reveal. Just know that this woman will analyze every person who is sitting at Glenda’s table right down to their last molecule. She will study them, inside and out. None can escape her eye and, in the end, her decisions in regards to their respective fates will be final, with no chance for reprieve or appeal.

Jones and Williams have constructed a mesmerizing thriller, one which plays out like some ethereally chilling combination of Corin Hardy’s 2015 creepy Irish fairy tale The Hallow and Luis Buñuel’s immortal 1972 Academy Award-winning classic The Discreet Charm of the Bourgeoisie. With delicate sleight of hand, the filmmaker examines issues relating to classism, climate change, wealth inequality, sexism and so much more with deliciously malevolent precision. Jones also does not skimp on the blood and gore, the resulting mixture of social commentary and ghoulish mystical terror beautifully upsetting on a primal level.

The core of the story is the blossoming relationship between Cadi and Glenda. While I think it is safe to say that there are attendees who are beyond salvation, a few are sitting there who could potentially live to see a new dawn. This is particularly true with Glenda. Cadi feels connected to her employer. She sings a song from the woman’s childhood. She finds an old tablecloth that belonged to her mother.

It is as if Cadi is trying to remind Glenda of who she was before power and greed took root inside her soul. She is trying to allude to the balance that must exist between humanity and nature if both are to survive, trying to reconnect the woman with her cultural heritage which she once held so dear. Cadi tries to get her to see all of this and more, the only question being whether or not Glenda is going to realize what is happening before it is too late.

Both Elwy and Roberts shine, each actor giving a multifaceted performance, even though the former utters precious few lines of dialogue while the latter apparently can’t stop talking even if her life depended on her doing so. They play off one another beautifully, showcasing a subtle back and forth that evolves into something even more hypnotically disquieting as each course is served and subsequently consumed by all of the night’s attendees.

While there are sudden jolts of violence and mysterious spurts of gore throughout, Jones keeps the pace measured and waits until the explosive final act before filling the screen with explicit explosions of mayhem. This does force the viewer to pay attention and try to keep track of which character is doing what at any given time. Doing so makes the climactic savagery even more effectively harrowing, the last moments overflowing in a disturbingly hushed eloquence that left me sitting in stunned silence when it was over.

Ghosts are real. Demons live in the hollow places of the earth. Vengeance is ready to take human form and restore balance to the natural world. These are some of the elements that appear to be at play in The Feast, and it is only by the process of elimination that the rules of this lethal game Glenda and her family are unknowingly playing can be understood. Make no mistake, as dinner parties go, this is as tastily abhorrent a one as any I’ve ever been to. 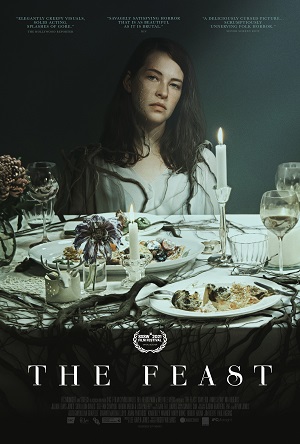