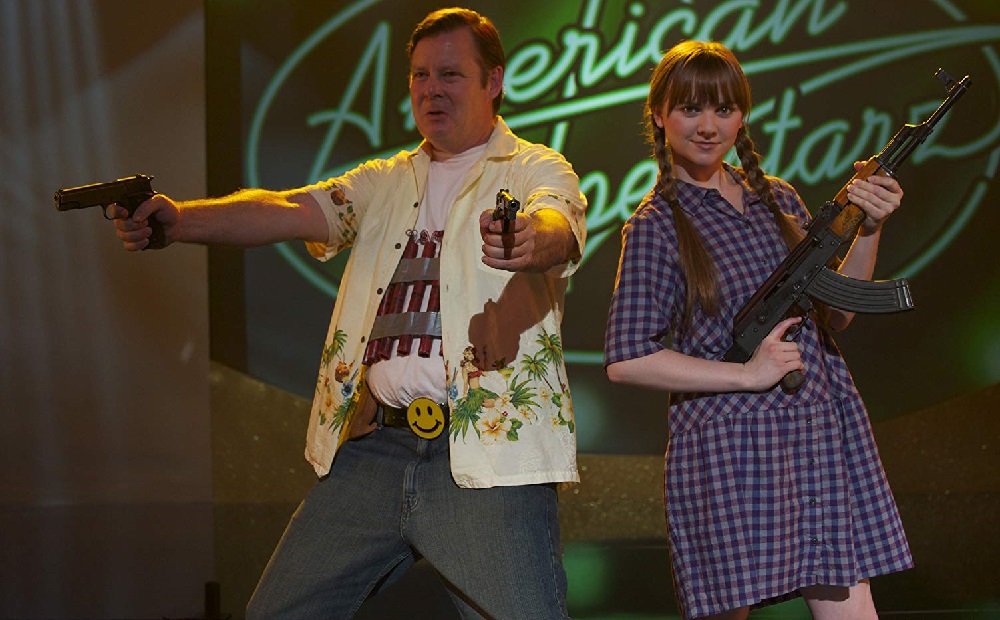 Frank (Joel Murray) is fed up. The lonely divorcé has had enough with his loudly obnoxious neighbors and with his coworkers’ inability to speak in anything other than recycled platitudes stolen from Right Wing radio and Left Wing television. He can’t stand that the only thing on the tube are supercilious reality programs where talent isn’t celebrated and the lack of it is ruthlessly ridiculed. Frank hates it all, and he’s sad that people no longer communicate with one another and simple niceties are apparently a thing of the past.

On the same day he’s fired from his job for speaking from the gut, Frank learns from his doctor he’s terminally ill. With nothing left to live for he makes a point to say goodbye to his selfishly materialistic little girl Alison (Mackenzie Brooke Smith) and heads out into the urban wilderness to right a few wrongs before planting a bullet into his brainpan. But after permanently canceling out a teenage reality television star in her high school’s parking lot, Frank meets Roxy (Tara Lynne Barr), a fellow student of the newly deceased who sees potential in the older man’s bloodletting.

What happens next in God Bless America audiences have to discover for themselves, writer/director Bobcat Goldthwait (World’s Greatest Dad) unleashing a brutally bloody satire on modern America that is as merciless as it is hysterical. The movie takes potshots at everything from our Kardashian-like obsession with celebrity, shows like “American Idol,” news personalities like Bill O’Reilly and idiots who use their mobile devices in movie theatres. Much like James Gunn’s Super the movie is a brazen middle finger pointed directly at the status quo, asking viewers to take the time to turn down the volume and communicate with one another only without cell phones glued to their collective ears.

When the movie works it positively soars. The early scenes where Frank is dealing with his coworkers, his inability to allow his irritation with her to mask his undying affection for his adolescent daughter and his fantasies as to what he’d like to do to his obnoxiously self-centered next door neighbors is a definite high. This passage culminates when he comes across Chloe (Maddie Hasson), a spoiled teenage rich-witch made a star thanks to one of those obnoxious MTV reality programs like “My Sweet 16.” What he does to her is so out of left field, so completely unexpected I almost squealed, Frank going to a place of cathartic mayhem so inexcusable it’s nothing less than sensational.

But Goldthwait can’t maintain this tone throughout, and even at 105 minutes in length there are some pacing issues, especially during the all-important third act. It’s also difficult to know what to make of Roxy, and as great as newcomer Barr proves to be I’d be lying if I didn’t admit her whole persona and the ephemeral reasons she latches onto Frank are borderline creepy. Also, while Goldthwait is fairly broad in his targeting, a lot of his bullets head to some fairly obvious places, making the final destination nowhere near as shocking as it potentially could have been.

Murray is close to perfect, adapting a sad-sack persona that fits Frank like an expensively-tailored suit jacket. His journey is one I could believe and relate to, all of which made his leap into ultraviolence every bit as disturbing as I hoped it was going to be. There are moments where I empathized with and related to him in ways that were decidedly uncomforting, Murray a determined force of nature I couldn’t take my eyes off of.

It doesn’t all work. The outcome is never in doubt. Yet Goldthwait gleefully pushes buttons lesser filmmakers wouldn’t dare to ponder let alone have the guts to bring to fruition. What he’s saying holds resonance, and why a lot of this is in aggressively bad taste I still found the film relatively easy to swallow. God Bless America comes out guns blazing, and even if all the targets don’t get hit just enough of them do the satirical end result is nothing less than lethal. 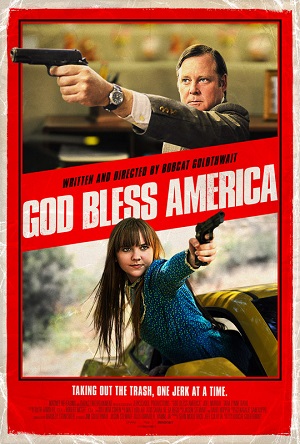