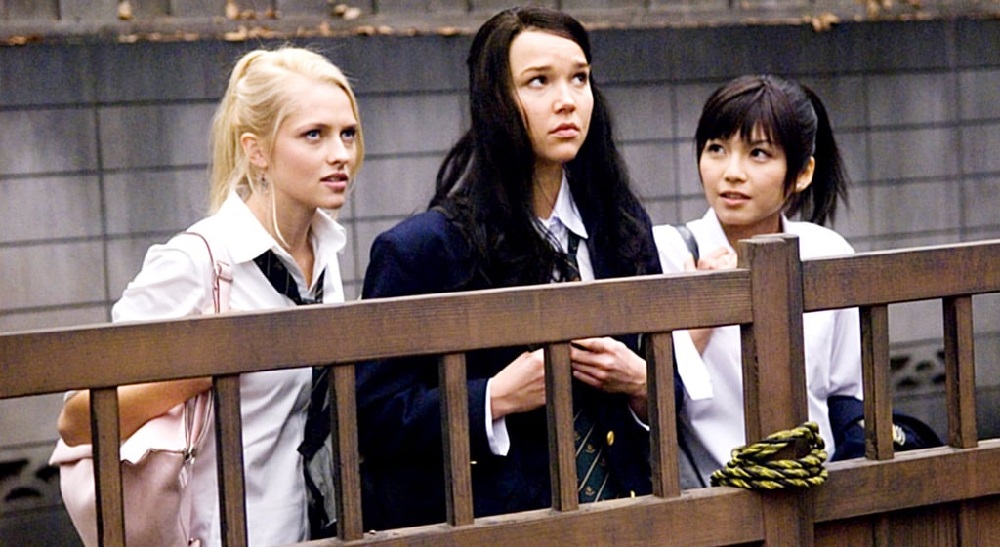 I’ve never liked the idea in horror movie sequels that you have to kill off the survivors of the previous picture in the first 15 minutes. That’s always seemed silly to me. You spend all this time hoping and rooting and praying they’ll live only to have them wiped out right off the bat during the next installment of the series. It’s dumb, and more than that I find it a bit insulting, and unless doing this advances the story in some meaningful way I’d rather filmmakers went a different direction.

Not that the producers behind The Grudge 2 care a lick about my theories on horror sequels. They’re interested in separating viewers from their money, wanting to cash in on a surprise success by churning out another entry as quickly as possible. This means keeping costs down and dispatching any pricey star who may have survived the first time around.

If all this sounds like a spoiler it’s not like the trailers, commercials and the gosh darn official plot synopsis haven’t already done a fabulous job of letting potential audiences know that Sarah Michelle Gellar isn’t around very long as far as this sequel is concerned. Thankfully, even with the idiotic way in which she is dispatched, Karen’s death does mean something as far as the plot to this second chapter in the Americanized version of this Japanese franchise is concerned. Returnees Takashi Shimizu (once again directing) and Stephen Susco (once more penning the screenplay) do their best to keep things moderately character-driven, while the inherent horrific spookiness of the concept still generates a handful of solid scares.

The sequel is split up into three different stories. The first follows Karen’s sister Amber (Amber Tamblyn) as she tries to piece together the tragedy that has taken her sibling’s life. The second concerns Tokyo International School student Allison (Arielle Kebbel) dealing with the repercussions of walking into the haunted house where this Grudge continues to live on a dare from fellow students Vanessa (Teresa Palmer) and Miyuki (Misako Uno). The third revolves around a Chicago family whose smallest child Jake (Matthew Knight) thinks something bad is going on in the apartment next door, and whatever it is it’s polluting the whole building with its evil.

These three tales are told in nonlinear fashion, Shimizu and Susco folding back and forth through time revealing intricate layers of terror and mystery that are patiently peeled away little by little. Like The Grudge, this follow-up relies upon the unseen corners of the frame and all of the various horrors the mind can conjure up to fill them to generate suspense, the evil vindictive apparitions revealed only at the very last moment in order to produce the biggest possible jolt.

Some of these tricks don’t work so well this time around. Allison’s thread is especially weak, many of the events happening to both her and her two friends too familiar to what occurred in the last film. There is also a ludicrous moment between Amber and an elderly Japanese woman, a scene that is supposed to grant insight into the evolution of Kayako’s (Takako Fuji, who has now played “The Grudge” in all six films of the franchise, Japanese and American) growing supernatural evil. Instead it’s just stupid, the scene unintentionally laughable instead of being hauntingly chilling.

But the sequel still has its merits. There are some deeply unsettling moments that make getting a good night’s sleep after watching a risky proposition. From a choke-on-your-screams bit in a photographic darkroom, to a final sequence back in the haunted house where it all began, Shimizu stages some of the creepiest sequences I’ve seen all year. The stuff back in the Chicago apartment complex is close to spectacular, director of photography Katsumi Yanagijima’s (Battle Royale) camera roaming the corridors of the building as if it were rolling down the halls of the Overlook Hotel.

I still can’t say I enjoyed The Grudge 2 near as much as I did its predecessor. While it does evolve the Ju-On mythology in directions I didn’t entirely see coming, many of the core elements still felt all-too-familiar. Because of the nature of the storytelling I never completely warmed to the characters, Amber, Allison, Jake and their respective friends and families feeling more like caricatures scrambling through an amusement park maze than they did flesh and blood human beings. All of which makes the sequel an insidious mixed bag of thrills and chills, and I’m just not sure the good elements outweigh the bad ones near enough to make watching it in a theatre worthwhile. 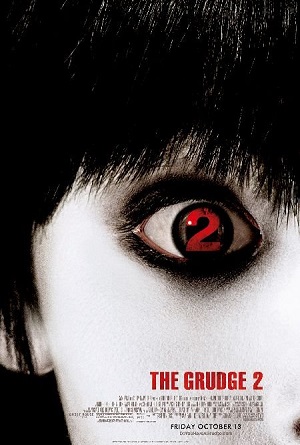