When a person dies in the midst of a powerful rage, that force lingers within a place and, much like a plague, tragically affects the lives of any who enter. That’s the central conceit of the popular Japanese horror series JU-ON, and it’s also the scenario of the Hollywood remake The Grudge. Under the deft handling and care of series creator Takashi Shimizu, this is one of the least-American horror thrillers to come out of a major studio in quite some time. That potentially explains why it also happens to be one of the most terrifying.

Exchange student Karen Walker (Sarah Michelle Gellar) is an aspiring social worker whom innocently agrees to cover for a fellow student when she doesn’t arrive for work. It’s the home of fellow American Emma (Grace Zabriskie), a catatonic elderly woman living with her son Matthew (William Mapother) and daughter-in-law Jennifer (Clea Duvall). When she arrives Karen is aghast to find the place a complete disaster. But a little torn up paper and some rotting noodles aren’t typically going to kill you. You pick them up and they’re gone.

The same cannot be said for the ghosts who also inhabit the premises. They’re a bit ticked off, and everyone who comes in contact with them has a nasty habit of disappearing or turning up dead. Karen isn’t sure what to do except maybe stay the hell away from the house. But when her own apartment shows signs of supernatural possession and the detective in charge (Ryo Ishibashi) warns her she could be next to vanish, the young woman takes a proactive approach and begins investigating the house’s sordid history. What she discovers is a tale of emotional and physical brutality on a flabbergasting scale, all of it gruesomely linked to the suicide of a visiting American professor (Bill Pullman) with ties to the former inhabitants who lived there before Grace and her family.

The Grudge is a metaphysical thrill ride full of imagination and psychological manipulation. It will draw comparisons, some fair, some not, to The Ring, but Shimizu should be applauded for creating a uniquely ethereal world with its own set of rules and regulations. American screenwriter Stephen Susco helps make the plot accessible for domestic audiences without sacrificing the Asian sensibilities crucial to it spooky success. Japanese horror, especially from recent masters of the genre like Kiyoshi Kurosawa (The Cure) and Hideo Nakata (Ringu), isn’t big on explanation, open questions and unresolved endings key to keeping audiences off their guard. That’s the way it is here as well, so viewers looking for answers or for things to be neatly tied together will undoubtedly be deeply disappointed.

None of which describes me or my personal tastes. Shimizu understands it is the unknown and the unseen that’s scariest, resorting to gurgled growls and passing glimpses of greasy-haired demons to illicit shrieks and shouts from a terrified theatre. Shot in a never-ending series of creamy blues and pixilated grays, the film never allowed me the opportunity to get my bearings, and when color or light does appear, it is a horrifying shock to the system. It’s like returning to the real world after waking from a terrible nightmare only to have the luster of this fantasy slowly dissolve away into nothingness, the bad dream continuing as if it will never come to an end.

This isn’t an actor’s movie. Most of what the cast does is to run around looking half-dead or scared out of their minds. Gellar, no stranger to the supernatural with “Buffy the Vampire Slayer,” tries her best to be a junior Sherlock Holmes but it’s so obvious Shimizu and Susco could care less about Karen’s sleuthing. As for Pullman, his part is basically a cameo. But he’s still effective in the role, the actor’s introduction into the story undeniably memorable.

I’m also not a big fan of things happening for no apparent reason. The ghosts spend a lot of time showing off for Karen, revealing pieces of their backstory to her yet to what end they are doing so is never entirely clear. None of it makes any sense, and while I get this is par for the course for Japanese horror when people who spend no more than a few seconds in the house get haunted down like dogs and dispatched without so much as a thank you or a post-coital cigarette a bit of explanation as to the how and the why might have been nice.

Yet this is still one significantly scary flick, one that bends time and loops in on itself like a giant puzzle box. Remaking this picture in Japan with the original’s director and crew proves to have been an ingenious choice on the studio’s part. Shimizu expands upon his world’s psychotic mythology in a way that makes his film feel at times like a cunning combination of Kiyoshi Kurosawa’s Sčance, John Boorman’s The Exorcist and Sofia Coppola’s Lost in Translation. The Grudge works, and I’ve got the sweaty palms to prove it. 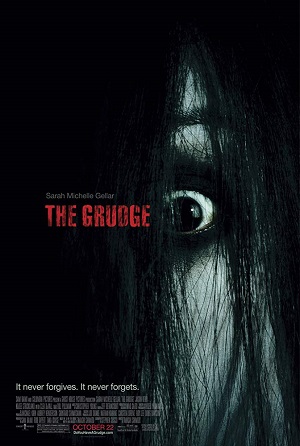