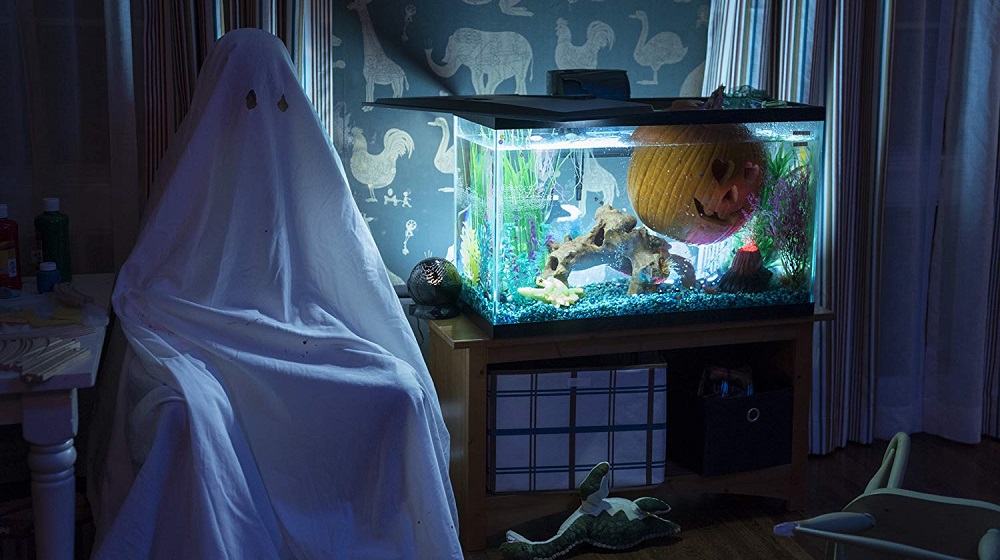 On Halloween night in 1978, teenager Laurie Strode (Jamie Lee Curtis) survived an attack from escaped mental patient Michael Myers while babysitting. Her friends were not so fortunate. All told Michael murdered five people before his psychiatrist Dr. Loomis put six bullets into him only for him to somehow survive and get re-incarcerated back inside Smith’s Grove sanitarium, and ever since that terrifying evening Laurie has been methodically making plans in case this unholy force of nature were to break free of his chains and return back to Haddonfield to finish what he started 40 years prior. 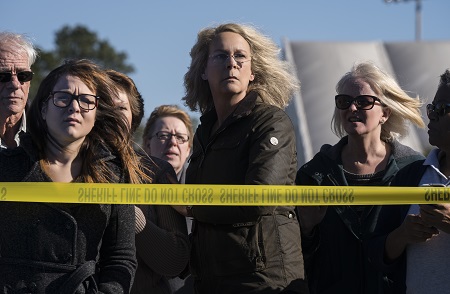 That night is tonight. It is again Halloween and Michael has escaped captivity. Much to the annoyance of her daughter Karen (Judy Greer) it’s just this eventuality Laurie been preparing for. She’s determined to end Michael’s reign of terror. But when her granddaughter Allyson (Andi Matichak) becomes caught in the crossfire, Laurie must rethink her plan. Not that this matters to Michael. He’s determined to kill everyone he encounters, his eventual confrontation with the only victim to have escaped his knife something he’s been silently waiting for ever since that night came to its violent conclusion.

There’s a lot to unpack as it pertains to director David Gordon Green’s direct sequel to John Carpenter’s timeless 1978 horror classic Halloween. The most pertinent thing to know? It’s the first entry in the long-running series of slasher films featuring Myers where Carpenter has been actively involved since 1981’s Halloween II. But in that case he and co-creator, screenwriter and frequent collaborator Debra Hill didn’t really want to continue the story of Michael Myers and Laurie Strode, their ideas about where to take the Halloween franchise next far different than what the studio had in mind. They had visions of creating something that’s familiar to today’s moviegoers but unthinkable in the 1980s and that’s the idea of a “shared universe.” Signing on to write, produce and score Halloween II allowed the two the freedom to make 1982’s Halloween III: Season of the Witch. But with its box office failure Carpenter appeared to be resigned to being finished with the franchise for good, content to pick up a series of residual checks from the various studios that have greenlit sequels and reboots over these past four decades.

The next thing to know is that, with Carpenter’s blessing, Green and his co-writers Danny McBride and Jeff Fradley have taken the Myers/Strode story back to the beginning. Gone are all of the sequels, and not just the Laurie-less entries Halloween 4: The Return of Michael Myers and Halloween 5, but also the films Curtis did appear in, most notably the aforementioned Halloween II and 1998’s Halloween H20. None of them exist in the newest incarnation of the story, things picking up 40 years later with Laurie a recluse still suffering from PTSD with two failed marriages, a daughter who seldom speaks to her and a granddaughter she frustratingly seldom gets to see while Michael remains incarcerated in Smith’s Grove under the supervision of Dr. Loomis’ protégé Dr. Sartain (Haluk Bilginer). All that other stuff? It’s gone, erased from the timeline, Green and company returning the story to its roots as outlined by Carpenter and Hill back in 1978.

Green proves, somewhat surprisingly, to be an inspired choice to pull this off. This is because, not only does he trust in Carpenter and Hill’s original conceit, but also thanks to his feel for intimate interpersonal minutia with his work on such films as George Washington, Joe, Prince Avalanche and Snow Angels has made abundantly clear. He makes a point to put character dynamics first ahead of all the blood, gore, violence and mayhem, grounding this new chapter in Laurie’s story in issues regarding post-traumatic stress, how violence begets violence, parental neglect and how the pursuit of vengeance can irrevocably stain everything it touches. He makes the relationship triangle between Laurie, Karen and Allyson the heartfelt, painfully emotional soul of the story, their collective pursuit of reconciliation, understanding and even forgiveness the most important aspect of the tale.

Additionally, he and his co-writers return Michael Myers to being “The Shape.” Described so memorably by Donald Pleasance’s Dr. Loomis in the 1978 original as “purely and simply…evil,” that is what he has become here once again. There is no rhyme to what Michael is doing. There is no reason. As obsessed as Dr. Sartain becomes in trying to ascertain what it is that fuels Michael’s actions the truth is that he refuses to believe what Dr. Loomis proclaimed and that is, as human as he looks, the physical body is only an empty shell, mindless violence and mayhem the only traits living within. This returns Michael to his terrifying status as an unstoppable bogeyman, and so the thought anyone could die, no matter who they are or how important or insignificant to the story they might be, exists from the moment he escapes Smith’s Grove to the second he and Laurie once again face one another down one-on-one.

Some of the plotting is a little contrived to the point of being silly. The narrative leaps in logic required to get all three Strode women out to Laurie’s isolated fortress as well as making sure Michael ends up there as well are fairly ludicrous. Additionally, the construct of having a pair of British journalists (Rhian Rees, Jefferson Hall) inadvertently be the instigators for Michael’s latest killing spree is rather laughable, and if not for the total commitment of the two actors during the expected moment when they realize the monster they’ve come to research cannot be studied I doubt I’d have cared about either of them whatsoever. The film also wastes a delicately balanced performance from veteran character actor Will Patton as a Haddonfield police officer who was there 40 years earlier when Michael’s first night of carnage came to an end. He’s excellent, but the story doesn’t seem to know what to do with him, and the way his character is ultimately dealt with comes perilously close to being inexcusable.

No matter. Greer is wonderful, her Karen having far more layers and emotional complexity than it initially appears, Green allowing her to play things close to the vest until the precise moment she’s no longer required to do so. Newcomer Matichak is also quite good, and I loved the authenticity of all the scenes between Allyson and her high school friends. It’s apparent the filmmakers went out of their way to study that aspect of Carpenter’s original, each teenager a fully-formed, realistic human being, as such when some of them meet their end at Michael’s hand the overall weight of their demise is bone-chilling.

Yet, in what will likely come as no shock to anyone, Curtis is the true draw here, and much like she did in Halloween H20 she does not disappoint in her return to the character that launched her career. Laurie continues to fit the actress like a glove. She slips inside of her with ease, the depths of pathos and pain bubbling within instantly palpable. Curtis crafts a performance that is devastating in its little nuances, watching her remain committed to her family no matter what the cost while at the same time battling those internal demons left by Michael’s knife back when she was still a senior in high school gut-wrenching in their intimacy. It’s a bravura performance that goes well beyond the expected, the levels of angst and grief coupling with a form of selflessly naked empathy that are continually moving in their fascinating specificity. 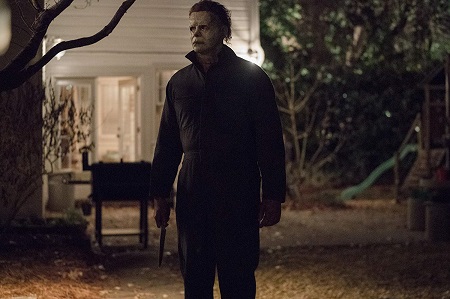 There are the requisite callbacks to the original Halloween. There are also some rather nice bits of homage paid to both Halloween II as well as Halloween III: Season of the Witch. Carpenter, working with his son Cody Carpenter and musician Daniel A. Davies (Condemned), delivers a kick-butt score that stands out on its own outside of his iconic work for the 1978 film. As for Michael Simmonds’ (The Lunchbox) menacing, methodically propulsive cinematography, the layering of darkness, shadow and light is exceptional, and while it does call to mind Dean Cundey’s spectacular work on the original, the uncomfortably lush layering of the images give the material a unique imprint that’s unnervingly glorious.

The same can be said for Green’s Halloween. It respects Carpenter’s film. It understands it, following in its footsteps with confidence. But the filmmaker has also made his own movie, told his own story, infusing it with a powerful, almost mournful grace that transcends generations as it becomes its own primal, expressively resonant thing. This next chapter of the story is undeniably its own distinctive thing, Michael and Laurie’s return to greatness as thrillingly bloodcurdling as it is joyfully welcome. 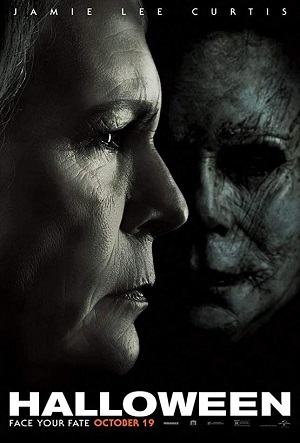