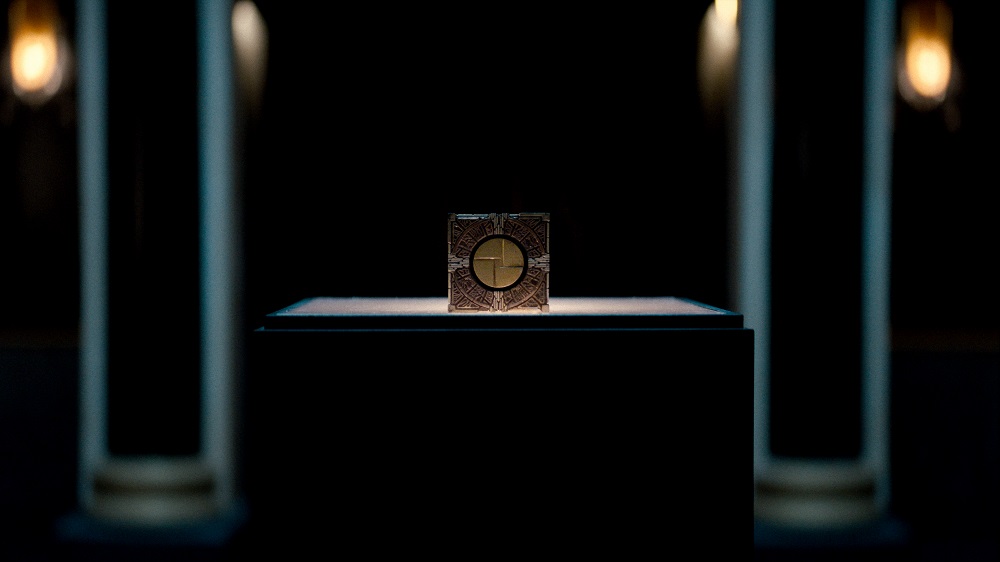 It’s just a box. An intricate, ornate golden puzzle box, initially no bigger than a Rubik’s cube, and by all accounts equally harmless. But looks can be deceiving. In this case, they can also be positively damning.

Of course, as fans of author Clive Barker already know, this is no ordinary box. It summons literal demons, warped humanoid beasts nicknamed “Cenobites,” who feed on the pain and suffering of all of those who mess with the box. They are led by a lethally lithe mistress known as the Hell Priest (Jamie Clayton), a disciple of the Leviathan who enjoys toying with potential victims, eager to capture fresh souls and see what kind of pleasures are to be found in the evisceration of the flesh.

Hellraiser, Barker’s 1987 adaptation of his novella The Hellbound Heart, and its superior sequel, Hellbound: Hellraiser II, first introduced the Cenobites, the Hell Priest (aka Pinhead), and The Box; spawned a massive cult following; and resulted in nine additional sequels, the majority of which went straight to video. While all of those follow-ups contained a handful of clever ideas — notably the third and fourth entries in the series — none of them are honestly very good, and it is only the strength of Barker’s concept and source material (not to mention Doug Bradley’s eight chilling portrayals of Pinhead) that kept viewers coming back for more, hopeful that the macabre magic of the first two would return.

It’s only taken 34 years, but director David Bruckner and writers Ben Collins, Luke Piotrowski, and David S. Goyer have done the impossible — and that’s make this series not just relevant but exceptional. This is a phenomenal continuation of Barker’s story, one that pays deft homage to both the source material and the original two films while also expanding the mythology in emotionally complex and dramatically unsettling ways. It is a magnificent motion picture, one that goes to some dark and heady places yet also knows how to have a bit of sadomasochistic fun along the way.

The film does lack a central villain, choosing instead to focus more on the cadre of characters tricked into playing with The Box, while in the same breath it keeps the murderous puppet master pulling their strings behind the curtain for over half of the two-hour running time. Problem is, the identity of this villain isn’t difficult to figure out. While I am sure this is by design, it is still a minor letdown when Bruckner and company lay all their cards on the table and finally reveal who is playing the game and who is just fodder to be brutally sacrificed to the Leviathan.

Riley McKendry (Odessa A’zion) is recovering addict who lives with her brother Matt (Brandon Flynn), his partner Colin (Adam Faison), and their roommate Nora (Aoife Hinds) in their downtown apartment. The latter two are frequently asked to play peacemakers between the two siblings, since Riley and Matt are seemingly at one another’s throats on a nightly basis.

This is all set-up for the mayhem to follow, so Bruckner spends the necessary time to introduce the core characters who will have to solve the riddle of The Box and try to survive face-to-face encounters with the Hell Priest and the army of Cenobites. Riley and her boyfriend Trevor (Drew Starkey) have ended up with the item after robbing an empty warehouse owned by an eccentric, and recently deceased, millionaire. They had no idea the forces they would unleash. The Hell Priest takes a specific interest in the young woman: primarily her internalized trauma, anxiety, and emotional pain as it pertains to her complicated relationship with Matt.

The core of this new Hellraiser is built on this foundation of internalized trauma. Riley’s battles with addiction have not gone smoothly, and it isn’t a shock to say she’s made several bad decisions as she tries to overcome a litany of mistakes. Yet the connection between sister and brother, even at its most tenuous, always remained strong. Now Matt is missing, and Riley does not know what to do other than to keep digging into The Box’s history, no matter what the cost, never realizing this is exactly what the Hell Priest and the Cenobites want, as it will bring more souls into their flesh-ripping chains of carnage and butchery.

Bruckner, Collins, and Piotrowski last worked together on last year’s superb supernatural chiller The Night House, and their take on Hellraiser proves to be a winning companion piece to that unnerving triumph. But where that was a more psychological examination of guilt, paranoia, and grief, here the filmmakers get to unleash Barker’s demonic creations and physically manifest all of those emotions in excruciatingly devilish detail.

And it’s magnificent. The whole thing is one giant roller-coaster ride, with Clayton’s chillingly mischievous incarnation of the Hell Priest at the controls, deciding how fast the viewer should take each turn or how steep the incline should be before sending everyone down into a full-throttle corkscrew of uncontrollable terror. It’s a delicious manifestation of power, a sinister otherworldly seduction that’s nothing less than glorious.

But Bruckner never loses sight of the human story at the heart of things. Riley is dealing with a lot, and it will be her decisions, her dreams, and her wishes that will ultimately determine whether the Cenobites will continue to rip apart the flesh of their victims and send more souls to the Leviathan to devour. She has to be the one to determine where the line between forgiveness for past sins begins and taking responsibility for one’s mistakes ends.

For all its fantastical elements, all of them born out of Barker’s fiendishly depraved imagination and brought to vibrant, ghoulishly horrific life by Bruckner and his talented team, this new Hellraiser understands that suffering isn’t a black-or-white emotion. It resides in the gray areas of the human psychological condition, and is as vital for healing and survival as friendship, companionship, or even love. The Hell Priest and The Box are avatars for this never-ending struggle, and the battle between salvation and destruction has seldom been this deliciously vile. 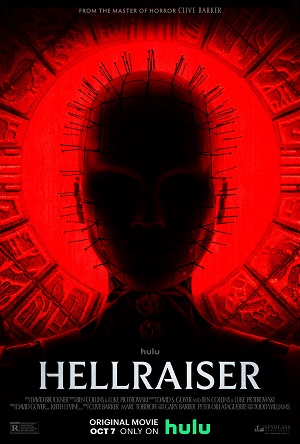