While on the outside The Night House appears to be nothing more than a routine ghost story revolving around a woman mourning the sudden loss of her husband, once the doors to this abode open, a labyrinthine puzzle begins to take shape. Like an M.C. Escher drawing, director David Bruckner (The Ritual) and Super Dark Times screenwriters Ben Collins and Luke Piotrowski create an impenetrably fascinating mosaic of trauma that shook me to the core.

Their film grabbed me by the throat and slowly squeezed. As the mystery at the center of this horrifying drama took shape, the pressure on my psychological sternum only amplified. This is a hauntingly primal tale of loss, where the search for truth comes with monstrously unforeseen consequences, and knowing what lies cleverly outside of direct sight, hiding in the darkness, isn’t nearly as comforting as it initially seems.

Beth’s (Rebecca Hall) architect husband Owen (Evan Jonigkeit) is dead. He committed suicide on a boat in the lake, just outside the house he built and designed for the two of them. It was senseless. There were no signs he was struggling with depression. Even the note he left is so vague it could be viewed as nonsensically, and Beth is left to maddeningly wonder if it was her fault Owen put a gun to his forehead and pulled the trigger.

There’s more. Beth discovers information that leads her to believe Owen was hiding inconceivable truths about himself from her. Pictures of other women, all of whom look strangely like her, on his phone. Their neighbor Mel (Vondie Curtis-Hall) uncomfortably deflecting direct questions when asked if he ever saw her husband acting strangely. Most of all, Beth believes there is a sinister presence residing in the house, and the more she learns about Owen, the more a throbbing worry develops that whatever – or whoever – it is wants to toy with her until she, too, takes her own life.

Lots of horror films utilize the genre to analyze the paralyzing aftereffects caused by the sudden loss of a loved one. Recently, Natalie Erika James’ magnificent Relic did this with debilitating specificity. Bryan Bertino’s devastatingly bleak The Dark and the Wicked did so as well. Both pictures achieved magnetically caustic intimacy that lingered with me for days, and just thinking about them now is enough to send frazzled shockwaves up and down my spine.

So Bruckner, Collins and Piotrowski are hiking down a well-worn path. But even so, they still are able to make this secluded backwoods sojourn come alive in a variety of innovative and surprising ways. Beth isn’t so much residing in a haunted house as she’s discovered an alternate reality that’s straight out of Alice Through the Looking Glass, a mirrored realm that’s both figurative and literal at the same time.

Cinematographer Elisha Christian (Columbus) is a wizard behind the camera. She navigates through production designer Kathrin Eder’s (Life Happens) twisted, immaculately constructed maze with pinpoint precision. Shadow and light assault one another. Irregular shapes conspire to form hazily irregular human-like apparitions that fade away back into invisibility when viewed from a different angle. It’s extraordinary work.

Then there is Hall. A gifted actor – that she didn’t garner an Academy Award nomination for 2016’s Christine still blows my mind; her performance one of the best I’ve seen the past two decades – and what she accomplishes here is breathtaking. Beth’s emotional permutations are never what I expected or anticipated them to be.

Hall ties herself into pretzel-like knots: flying high one moment, wallowing in self-pity and despair a nanosecond later. Spitting venomous anger towards shocked coworkers — only to instantly devolve into warmly exasperated jolts of laughter that instantaneously put anyone sitting at her table at relieved ease. Everything Hall does is achingly genuine, and this makes her physical and psychological permutations during the climax all the more powerful.

There is a cleanliness to the resolution I’m not entirely sure works. In the same breath, Beth has been fighting a battle that began years before Owen committed suicide, one against ephemeral forces so nightmarish they couldn’t be real. But in The Night House, they are, and the only way to overcome the depressive grief they produce is to recognize that love and loss walk hand in hand, and to fully embrace the former, the latter must be given its due. 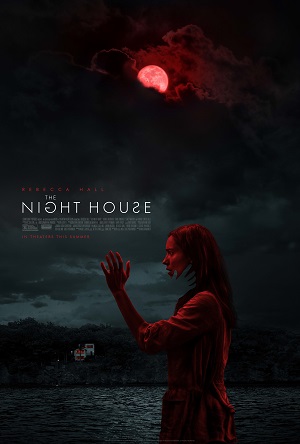