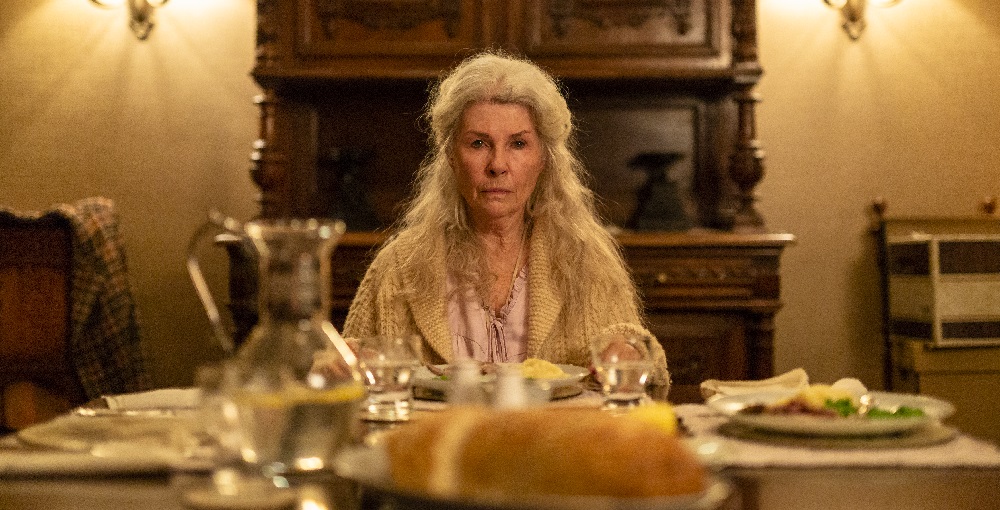 Natalie Erika James’ hauntingly personal horror yarn Relic refuses to let go. It attaches itself to the viewer with insidious authority, wrapping its cold, clammy fingers around the wrist with such methodic grace I almost didn’t notice it was happening. This movie shook me to my core, and by the time it ended I had to sit in silence pondering its many humanistic layers for several minutes.

The rot is unavoidable. When her mother Edna (Robyn Nevin) inexplicably vanishes, daughter Kay (Emily Mortimer) returns to her isolated childhood home to help find her. She is joined by her own daughter Sam (Bella Heathcote), the young woman having a special connection with her grandmother that could prove helpful during the search. Both are struck by the condition of the house, oddly discolored patches of damage sprinkled across the walls, ceilings and floors, and it appears to be spreading.

A few days after Kay and Sam’s arrival, Edna reappears. Sporting a somewhat fractured memory as to where she went and why she left, other than a few bumps and bruises the older woman appears to be physically unharmed. But the longer that Kay and Sam stay and the harder they work to try and figure out the best course of action as it relates to Edna’s wellbeing it slowly becomes clear something other than age and minor bouts of memory loss are amiss. Whatever is affecting the house is assaulting her as well, and if Kay and Sam can’t figure out what is going on soon it’s likely the same thing will start happening to them.

Pain. Loss. Sacrifice. Age. Regret. Guilt. Grief. The fear of letting go. The terror of holding on. These are just some of the items put under the introspectively familial microscope in James and co-writer Christian White’s insightful script. Much like Shirley Jackson’s The Haunting of Hill House (and subsequently flawless adaptations from director Robert Wise in 1963 and showrunner Mike Flanagan for Netflix in 2018) or Jennifer Kent’s 2014 stunner The Babadook, the haunted house horrors of Relic are more inherently personal than they are exclusively supernatural. While something is in the house, while outside forces are attempting to rip these three women to emotional shreds, it is their internal demons which prove to be the most lethal, the words left unfinished or unspoken the ones that could ultimately do them in.

The metaphorical allusions to dementia and Alzheimer’s are obvious, but I can’t say it’s like James is going out of her way to hide those connections. If anything, this only heightens the gnawing terror that’s baring its mangled, blackened teeth as it looks to devour Kay and Sam once it finishes feasting on Edna. This augments the tension considerably. It also helps strengthen the bond between these women even as the younger two worry the cord connecting them is starting to fray to the point it could snap without warning. Through these travails they discover an interior resolve they maybe didn’t know was there to begin with, each fighting an unseen enemy they can’t begin to fully comprehend.

The methodical pace does take some getting used to, and even at a tick or two less than 90 minutes James takes her time clarifying and fleshing out the core themes she’s wanting to explore. But much like the creeping mold smothering the house, it is in this agonizingly glacial onslaught of worry and trauma where the most heartrending truths are unearthed. If anything, it is the supernatural elements that are the weakest parts of this tale, flashbacks to a cabin nestled into a dank corner of the woods and an ornate antique stained glass window not adding nearly as much to the story as is likely the intent.

Can’t say any of that bothers me a whole heck of a lot. The performances from all three leads, especially a spellbinding Mortimer, are exceptional, while Charlie Sarroff’s exquisite cinematography and Brian Reitzell’s (The Bling Ring) disquieting score are equally outstanding. Best of all might just be Steven Jones-Evans’ (Hotel Mumbai) dazzling production design, the lived-in dilapidated intricacy of the house itself becoming a fourth main character who as important to the eventual outcome of the narrative as Edna, Kay and Sam are.

But the star of this show is undeniably Jones. The director instantly cements herself as a talented artist with a distinctive point of view and an innate understanding of the cinematic medium. For her, Relic is a monumental triumph. It is a calling card that marks the arrival of a filmmaker worth keeping an eye. Most of all, it is a singularly magnetic motion picture that burrows under the skin leaving a lasting scar, the hushed uncertainty of the devastation left behind in its wake impossible to forget. 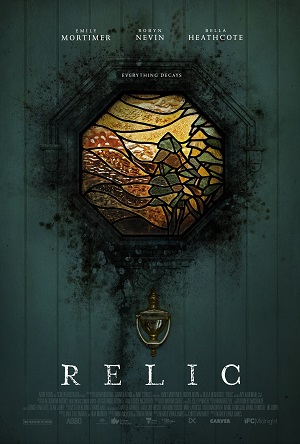