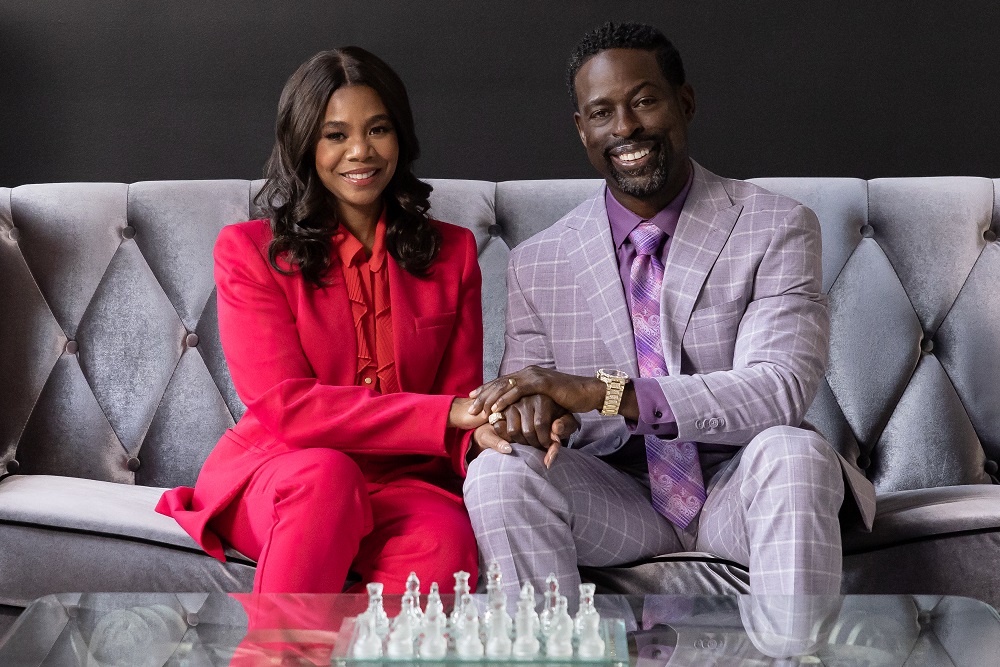 I’m not sure I’m the right one to review the sly, uncomfortably subversive satirical comedy Honk for Jesus. Save Your Soul. Raised Lutheran, I stopped going to church pretty much the moment I finished confirmation. The insincerity of it all was too much for me, and even as a teenager questioning who I was and where I was headed, I could tell that organized religion was going to do me far more harm than good — and the place we went to was considered one of the more accepting and progressive venues in all of good old Spokane, WA!

But filmmaker Adamma Ebo’s disquietly hysterical mockumentary takes dead aim at the Southern Baptist church and, more specifically, its long-standing position of authority in the African American community. I’ve been to a Black church all of one time, when a good friend was singing their first solo in the choir, and while it was a raucous and energizing experience I shall never forget, that does not make me feel like I can or should speak to all of the layers subtly — and not so subtly — lurking within Ebo’s film. It’s not my place, and that’s how it should be.

Here is what I do know: Regina Hall is magnificent, giving a tour de force performance that may rival her career-best work in 2018’s Support the Girls. It’s easily going to be one of the finest, most memorable pieces of acting I’ll have watched in all of 2022. She brings levels of introspective, soul-searching intensity that are earth-shattering. Hall captivates from first frame to last, tickling my funny bone, tugging on my heartstrings, and leaving me profoundly dumbstruck by her brilliance on multiple occasions.

I also have no hesitation singing the praises of Sterling K. Brown. While it’s hardly a surprise that he’s excellent, that he nearly matches Hall beat for beat somewhat is, especially as his character has a far less interesting arc. But that does not mean that Brown plays a less complex character; it’s only that his journey is more familiar and holds fewer surprises. But Brown brings a noteworthy, internalized complexity to his performance, elevating the material in the process, and the writing is far more straightforward for Brown’s character than it is for Hall’s.

Lee-Curtis Childs (Brown) is the pastor of the Atlanta Southern Baptist megachurch Wander to Greater Paths; Trinitie (Hall) is his supportive first lady. The loving husband and wife make it their mission to be there for one another through thick and thin, no matter what the obstacles confronting them. Good thing, too, as the latest mountain they’re attempting to climb is positively Sisyphean.

With a documentary film crew following their every move, Lee-Curtis and Trinitie are attempting to resurrect Wander to Greater Paths on Easter Sunday. Their church has been closed for almost a year after a scandal involving the pastor scored local and national headlines. Lee-Curtis maintained his innocence, and after counseling, prayer, and personal introspection, Trinitie made the difficult decision to stand alongside him in support.

What follows is an examination of faith, marriage, fidelity, and community, and Ebo isn’t inclined to pull her punches. There is a razor-sharp specificity to this world’s dynamics that is confidently realized, and it’s clear the filmmaker is drawing from personal observational experience. This satire has teeth and isn’t afraid to draw blood, earning its R rating with grit, resilience, and an uncouth determination to paint a stark picture that takes zero prisoners and doesn’t give two shakes if anyone gets offended.

But as universal as many of the themes Ebo is exploring are, there are enough culturally specific aspects of this world and its depiction that a few elements of the underlying narrative flew over my head. This may be the point. By keeping things so focused, Ebo can make big, broad swings, allowing the filmmaker the freedom to eviscerate the inherent hypocrisies of religious fundamentalism while in the same breath showcasing how true faith and a selfless belief in a higher power can change lives for the better.

It doesn’t take a lot of guessing to figure out the particulars of Lee-Curtis’ alleged indiscretions. Yet Brown does a good job of magnifying what happened in ways that do not feel forced or sensationalistic. If anything, he does a terrifyingly good job of showcasing how many predators in positions of power fail to see how vile or egregious their wrongdoing is. There’s a nearly wordless roadside interaction with one of Lee-Curtis’ accusers as he and Trinitie attempt to drum up excitement for the church’s reopening that chilled me to the bone, in which Brown’s hushed, almost tearful indignation is shockingly powerful.

Still, this is Hall’s film. A gifted actor, she can do more with her eyes or the slow, almost imperceptible movements of her shoulders and hands than many performers can with a whole catalog of verbal histrionics or broad physical shenanigans. But she has those overtly theatrical skills at her disposal, too, which create a symphony of movement and dialogue that’s extraordinary.

There’s a reason Ebo focuses the camera directly on Hall to start and end her film. As much as this is a story of organized religion, Black churches, and marriage, Honk for Jesus. Save Your Soul. is a chronicle of a woman at a crossroads, analyzing life, love, and God in excruciating detail — and not necessarily in that order. Hall bares her soul for everyone to see, the naked, making the unvarnished truths she delivers an eye-opening sermon of personal responsibility worth paying attention to. 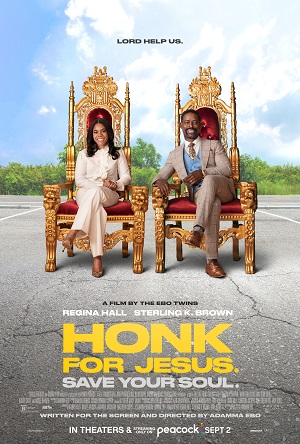