The sordid tale at the heart of House of Gucci is a truth-is-stranger-than-fiction situation. Based on the best-selling book by Sara Gay Forden, director Ridley Scott’s star-studded endeavor is an epic, larger-than-life melodrama of big moments and even bigger performances. It is smarmy, nutty, glossy, nasty, self-indulgent, and arguably a wee bit overlong. Scott goes for broke, hitting the mark more often than he misses, but when those shots go wide, they do so by a country mile.

As the 1970s are drawing to a close, Patrizia Reggiani (Lady Gaga) makes the acquaintance of Maurizio Gucci (Adam Driver) at a party. The son of Rodolfo Gucci (Jeremy Irons) and the nephew of Aldo Gucci (Al Pacino), the young man is studying to be a lawyer and wants no part of the family business. Patrizia, however, has other ideas. After their romance and subsequent marriage erects a wall between Maurizio and Rodolfo, she finds a way to ingratiate herself with Aldo, planting seeds that will eventually push her new husband into his uncle’s good graces.

The first hour of this 157-minute opus is sensational. The meet-cute between Patrizia and Maurizio is sublime. So is their subsequent romance, including a brief period where Maurizio works for Patrizia’s trucking magnate father Vincent (Fernando Reggiani) after Rodolfo cuts his son out of his life equally so. The pair’s romantic entanglement has passion and fire, the electrical undercurrents passing between them taking on a mesmeric life of its own that’s positively dazzling.

Things go into overdrive when Aldo enters the picture. The explosively bewildering insanity of the fashion magnate’s birthday party is mind-blowing. It is here that Jared Leto is introduced as Aldo’s cluelessly effete son Paolo, and it immediately becomes crystal clear that Scott has no intention of playing things safe. He allows the Gucci saga to play like an episode of Dynasty on steroids. No emotion is too giant. No performance is too broad. When you look in the dictionary for a definition of “excess” it wouldn’t surprise me if all that’s there now is this film’s poster.

Naturally, the core of this saga is how Patrizia and Maurizio’s relationship changes over the decades. As she finagles and plots her husband’s rise up the Gucci business ladder, he, in turn, becomes increasingly heartless, allowing power to fundamentally change him, much to his wife’s dismay. It’s a calamity of tragic errors on both their parts: one listening to bad advice and following even worse instruction, the other thinking that all of this underhanded double-dealing wouldn’t fundamentally affect their marriage, forever destroying whatever love there was between them.

Becky Johnston (The Prince of Tides) and Roberto Bentivegna cram as much as they can into their screenplay, and there is an episodically sprawling nature to the narrative that can be equally frustrating and fascinating. Additionally, Scott gives his high-powered cast the freedom to cut loose in almost every way imaginable. Some, in the case of Pacino, Irons and especially Driver, play things relatively straight and close to the vest. Others, most notably Leto, go in unimaginable, borderline cartoonish directions that defy easy description.

Then there is Gaga. A friend of mine recently commented how the pop superstar was out there slaying on the red carpet on her worldwide promotional tour, saying how he’s been “eating up” every one of her looks. My response? Seems like a fair observation, considering how in House of Gucci she consumes every inch of the screen as if she were a gluttonous carnivore unable to control her cravings.

In all seriousness, Scott unleashes Gaga upon the material. She, in turn, makes mincemeat out of it. This is a performance of otherworldly, Joan Crawford-meets-Sophia Loren proportions. As internally subtle as Gaga’s work in A Star Is Born was, what she does here contains nothing minimalistic. She makes Patrizia an atomic-powered siren serenading the Gucci family to its doom, her initial girlish infatuation with Maurizio morphing into a full-blown Machiavellian powder keg of vitriolic retribution that’s extraordinary.

There’s so much more I could add, including a discussion about Dariusz Wolski’s (News of the World) suitably glossy camerawork, the lush production design crafted by three-time Academy Award nominee Arthur Max (Gladiator) and Janty Yates’ (The Last Duel) expensively immaculate costumes. The technical facets are topnotch, and like all of Scott’s motion pictures, there is not a single visual element that is anything other than magnificent.

As for House of Gucci as a whole, that’s a different animal. The parts I loved I did so with all my heart. The stuff I didn’t I found more perplexing than unappealing, as the jarring shifts in tone from soapy melodrama to kitschy comedy to something bafflingly in between were a lot for any viewer to deal with. Scott dares the audience to accept what he is doing, no questions asked, making this a lethally deranged haute couture treatise on avarice, fashion, family and fame I’m going to be thinking about for a long time to come. 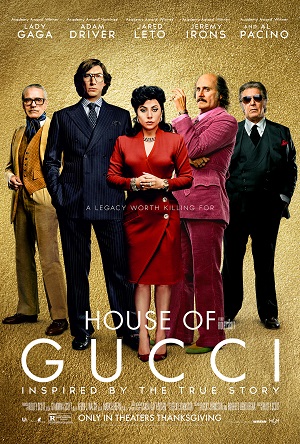