A group of students making their way to the college football game of the year suffer a mysterious breakdown after spending the night camping. While the majority of the group decides to continue on to the game in the one remaining working vehicle, Carly (Elisha Cuthbert) and her boyfriend Wade (Jared Padalecki) make their way into the small town of Ambrose to buy a new fan belt.

The town, whose main attraction is the unusually constructed Trudy’s House of Wax, is ominously quiet, the only active residents apparently an elderly woman looking out her living room window and a belligerent gas station owner named Bo (Brian Van Holt). He’s got a fan belt, but he’s not going to be able to sell it to the couple until after the funeral service the pair inadvertently interrupted comes to an end. As they have to wait, Carly and Wade decide to check out the museum, discovering the most chillingly lifelike wax attractions they’ve ever seen.

There is a reason these waxworks are disturbingly real, and the secret behind Ambrose’s serenity is hidden in plain sight. Everyone suddenly finds themselves in mortal danger, including Carly’s ex-con brother Nick (Chad Michael Murray), each forced to do whatever they can to escape the town unless they want to become a permanent member of the community.

It’s likely everyone going to House of Wax hoping to see Paris Hilton meet her just deserts and become even more of a human Barbie Doll will find much to cheer about. If, however, those expecting a reasonably fun and intelligent update of the wondrous 1953 Vincent Price classic will almost undoubtedly feel they’ve stumbled into the wrong place. These are not similar motion pictures, and that’s exactly as it should be.

This is an exuberantly idiotic horror show that wears its absurdity proudly upon its sleeve. Screenwriters Chad Hayes and Carey W. Hayes pack their narrative with so many, “Don’t go in there!” clichés you’d think they thought they were inventing them. There are just as many moments that elicit giggles as they do shrieks, the audience I saw this one with more than willing to heartily laugh whenever the option to do so arose.

This is not to allude that House of Wax is particularly difficult to sit through. Quite the opposite. Cuthbert is a perky damsel-in-distress, Murray’s loner tough guy routine (the same one he uses on the WB’s One Tree Hill) is surprisingly effective and Van Holt is a menacingly efficient villain. Director Jaume Collet-Serra (a commercial director making his feature debut) sets a gruesomely nasty tone and he’s not afraid to let scenes play out over time, refusing to resort to Michael Bay-like jump cuts and hyper-fast edits to get a rise out of the audience.

Best of all is the remake’s astonishing production design. Graham ‘Grace’ Walker (Dead Calm) and his talented team do incredible work. They’ve created an entire town of wax figurines so unsettling and insidiously creepy they’d probably make a mint showcasing them on an actual museum tour.

Unsurprisingly, the centerpiece is the gigantic Trudy’s House of Wax. It’s awesome, and when the whole thing starts to melt in a gigantic bonfire of hellfire insanity the effect is startling. Everything oozes this way and that like gelatinous glaze slowly encasing the pulpous exterior of a jelly doughnut. The special effects technicians behind putting it all together should give themselves a collective pat on the back, their combined efforts nothing short of magnificent.

It’s still pretty silly, and not all of it works near as well as I kept hoping it would. But Hilton’s big moment is almost worth the price of a matinee ticket all by itself, while Collet-Serra’s inventively confident direction hints of potentially great things to come in the future. House of Wax is cruelly juvenile in ways that worked for me, and as far as Dark Castle’s current run of bloody horror remakes are concerned, this might just be their best one yet. 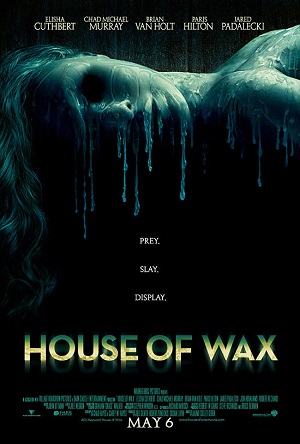