With just over a month left in their tour of duty, bomb disposal techs Sergeant JT Sanborn (Anthony Mackie) and Specialist Owen Eldridge (Brian Geraghty) aren’t too sure of their new Staff Sergeant William James’ (Jeremy Renner) sanity. He’s pushing them well beyond the breaking point, their daily stride through the streets of Baghdad looking for explosive devices already dangerous enough without him being such a gung-ho wild card.

Kathryn Bigelow’s (Point Break, The Weight of Water) new motion picture The Hurt Locker is everything you’ve heard and more. Fueled with adrenaline, powered by a volcanic sense of pace, the visceral power of this intense thriller is a powder keg of raw fury and sweat-stained terror. From the opening moments the tension the director achieves contorts the audience into ever-tightening knots of fear, every nook, every cranny, every piece of the landscape a potential landmine of destruction just waiting to explode.

But Bigelow’s epic is so much more than a straightforward Iraq War-set military thriller. Journalist Mark Boal’s (In the Valley of Elah) deft, multilayered screenplay is an emotional journey inside the heads of three men driving headlong into a Conradian heart of darkness. Their relationship, its ups and downs, its ins and outs, are what make this film an instant classic, their journey of survival the tip of a sword that gives the picture its murderous edge.

The question now is not whether or not audiences will respond to The Hurt Locker but instead whether or not they’ll step out of their door to even see it. Films even passingly associated with the Iraq War have met with nothing but box office disaster, and while the quality has been fairly high across the board for most of these motion pictures, the level of viewer indifference has frustratingly exceeded it.

Here’s hoping that trend does not continue. Not so much an examination of the whys of the war, Bigelow and Boal are more interested in the soldiers tasked with fighting it than they are anything else. Together, they achieve an unnerving spectacle that left me breathless, the final days of James, Sanborn and Eldridge’s tour clicking down like its own sort of time bomb eager to detonate and designed to maximum damage.

Renner has never been better. While he’s given solid supporting turns in films as diverse as The Assassination of Jesse James by the Coward Robert Ford, 28 Weeks Later and North Country, his complex performance in this is nothing less than masterful. Sanborn is a man alive in the desert and addicted to the juice of combat. Danger excites him, and like a drug addict in need of a fix each roadside device is a needle to the vein giving him an instant high as well as unbearable urge to do it all over again once the euphoria fades away.

Mackey and relative newcomer Geraghty are the yins to Renner’s yang. They do their job without questions or hesitation. But they also look forward to the peaceful tranquility of home. This life, while one of their own choosing, isn’t what they want to be associated with forever, each actor reflecting the conflicting and sometimes painful emotions associated with military service with believable authenticity.

Bigger name actors like Guy Pearce, Ralph Fiennes and David Morse make brief appearances, but it is the main trio that does all the hard work. Bigelow tracks them through Boal’s incendiary maze with mesmerizing skill, no edit or shot a false or unwelcome one. Everything works in relation to its counterpart, and by the end not a single piece of this puzzle is left unconnected, the filmmaker delivering her best, most uncompromising feature since her underappreciated 1995 triumph Strange Days.

I saw The Hurt Locker twice during the Seattle International Films Festival and I can’t wait to see it a third time when it hits theaters here in Seattle later this July. Like all great cinema, each viewing reveals something new I didn’t see the last time, the pleasures of the picture wrapped up in some nitroglycerin-covered celluloid that offers up a major bang. This is the real deal in action theatrics, Bigelow’s film a pulse-pounding dynamo that puts all of Hollywood’s meager Summer 2009 offerings to immediate shame. 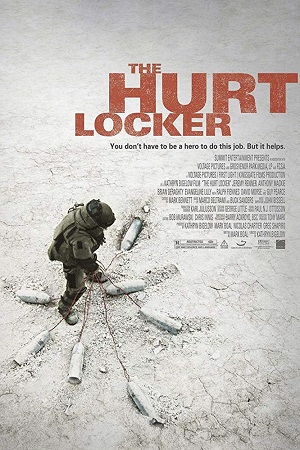