I have no idea what to make of writer-director Addison Heimann’s psychological horror yarn Hypochondriac. The film is a surreal, WTF descent into the early stages of mental illness. It is also an unhinged character study of a young man dealing with the lasting emotional damage caused by watching a mother succumb to madness and a father’s seeming unwillingness to do anything about it other than to lock his wife away inside a psychiatric institution.

But that’s not all that’s going on. There is a running gag involving the medical industry not so much misdiagnosing patients as underdiagnosing them to save time, minimize cost, and apparently create repeat customers. There’s also stuff involving relationships and the difficulties of accepting supposed loved ones for who they are, faults and all, no matter what the circumstance. There are even bits concerning how service industry jobs can take endanger their employees’ health and safety.

IIt’s a lot, and Heimann doesn’t exactly go out of his way to juggle it all cleanly or with precision. Instead, he’s channeling his inner Richard Kelly. This is like a twentysomething, LGBTQ+ Donnie Darko, complete with psychedelic conversations with prescient creatures wearing animal suits. Only in this case, instead of a terrifying bunny, we have a streamlined figure in a wolf costume who is either a figment of the main character’s imagination or a supernatural demon intent on becoming his best friend.

Will (Zach Villa) works as a potter in a small, upscale boutique. He is in a committed relationship with Luke (Devon Graye), and even with their differences, both young men are virtually certain what they’re feeling for one another is nothing less than love.

But Will is hiding a few things about himself from his boyfriend. Almost two decades prior, when he was still a small boy, Will’s mother (Marlene Forte) suffered some sort of breakdown and almost strangled him to death. His father (Chris Doubek) had her committed to an asylum and then proceeded to never speak about what happened ever again. Now Will avoids his mother like the plague, worried that if he were to talk to her — let alone be in her presence — he’ll begin to have similar psychotic episodes that could ruin his life and lead him to commit unspeakable acts of violence.

Heimann sends things spiraling into chaos relatively early on. A series of unexplainable occurrences lead Will to find his arms locking up to the point he cannot use them with any consistency. He starts to have visions. He begins to wonder if his mother truly can see into the future and does intimately know about the evils that lurk inside the hearts of men. Most of all, Will begins to question everything about himself and the reality his life is built on, even his relationship with Luke, while a strange figure dressed as a bloodthirsty wolf gives him questionable advice, the veracity of which he’s never sure of.

Needless to say, these metaphorical discombobulations will not work for everyone. Will’s slide into perplexed uncertainty happens very quickly, and his relationship with Luke is outlined in minimalistic brushstrokes. The visual aesthetic designed by Heimann and cinematographer Dustin Supencheck is purposefully phantasmagoric, while Mike Hugo cuts the picture together in a manner that only augments the optical bedlam. It’s a lot to take in, and I imagine there will be those who tune out long before Will begins to make anything close to sense of his situation.

Be that as it may, there’s something about Hypochondriac that grabbed a hold of me and refused to let go. Will actively looks for help. He isn’t slinking into a corner and hiding. This is a man who witnessed what happened to his mother and does not want to see his life derailed as hers was. Moreover, he wants his relationship with Luke to succeed, and he’s willing to fight any way he has to for that to happen.

Heimann wrote the film as a response to his own mental breakdown, as a form of catharsis, and I can’t say I find this revelation surprising. His feature-length debut is messy and unfocused, much of it playing like some frenzied nightmare sprung straight out of a fracturing subconscious desperately clinging to some semblance of sanity.

But Hypochondriac has heart and it has soul, and even if Will’s journey to self-actualization remains unfinished, I still found going on this trek alongside him — and his wolf — hypnotically worthwhile. 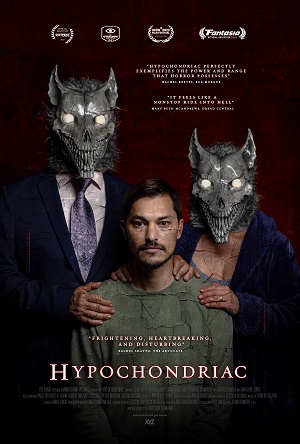