“There’s a man in the basement…”

“It’s Christmas, and Matt’s (AJ Bowen) kindhearted wife Karen (Susan Burke) has convinced him they should visit his estranged brother Steve (Scott Poythress). The man has turned himself into something of an agoraphobic hermit since the death of his wife, locking himself inside the family home as if it were his own suburban fortress of solitude. Matt and Sarah think this surprise get-together will do Steve some good, maybe force him to re-enter the world, a little familial affection just the thing he needs to get back on with his life and put the past behind him.

This visit may have been a bad idea. Steve is nervous, so anxious he’ll do just about anything to get Matt and Karen to leave the house. But as the night goes on it’s equally apparent he wants to confide some sort of secret to someone, and who better for him to turn to than his family? Except, one Matt and Karen learn what Steve is hiding down in the basement they’d rather have been kept in the dark and taken their Christmas well-wishes elsewhere. He claims he has the Devil, the actual honest to goodness Lord of Hell, trapped behind a door and sealed shut with a massive wooden cross. This is not good news, and initially the only question Matt and Karen are debating is whether or not to release whoever is locked in the basement themselves or to call the police and have them take care of it.

But what if Steve really was holding the Devil down there? What if Steve isn’t lying? What if his ramblings are not that of a raving lunatic, but instead those of a perfectly sane human being who is beginning to realize they’ve bitten off far more they can chew? These are amongst the many questions Matt and Karen find themselves forced to answer in the methodic, character-driven thriller I Trapped the Devil, writer-director Josh Lobo’s minimalistic debut an unsettling piece of hypnotic horror that slowly burrowed its way under my skin as it went along. Maybe a little ephemeral and nondescript for its own good, this is still a discomforting little shocker that features a wonderful central performance from Burke, the actress giving things a complex emotional gravitas that took me by surprise.

Lobo’s use of sound is excellent. The low whispers coming from the basement door when Matt and Karen enter the room for the first time, ones that only can be heard when the cross is removed from its anchoring position. The way the stairs eek and creek as any of the characters attempt to make their way through the house as silently as they can. The incidental ambient noises coming from outside, all of them made even more surreal and unsettling after Steve reveals who it is he’s holding prisoner. The buzz of electrical currents as Christmas Tree lights flicker and jolts of extra energy go coursing through the house’s wiring. The sound design goes a long way towards augmenting the inherent tension of the scenario while it also helps gloss over a few of the narrative’s more obnoxiously ridiculous elements, Lobo allowing his talented technical team the freedom to craft a subtle sonic maelstrom of misdirection and subterfuge that’s undeniably impressive.

But even at barely 82-minutes in length the film sometimes feels a bit padded, almost as if this script originally started out as a short and then the director got financing for a feature so he stretched things out a little longer even if he didn’t have very many ideas as to the best way to do just that. I felt like a couple scenes added extraneous bits of exposition I didn’t need in order to understand what was going on, while visits to a workroom where Steve has done all his research into the Devil’s deathly devious doings grow a little tiresome about the third time they happen. I also feel like the framing device Lobo crafts isn’t very effective, and as powerful as the film’s final scenes might be I am also of the opinion they’d have been even more of a startling gut-punch had the director utilized a more linear storytelling method.

Who am I kidding. Even with my many reservations, Lobo’s debut worked for me, that final climactic sequence a whirligig of tragedy, sacrifice and regret where even the stoutest hearts and the best, most selfless intentions end up buried in a hellfire of one’s own making. I dug Ben Lovett’s (The Wind) haunting score and felt newcomer Bryce Holden’s cinematography dripped in evocatively petrifying atmosphere that made it impossible for me to tear my eyes away from the screen. Add in Burke’s compelling, heartbreakingly terrifying performance and I Trapped the Devil is an austere shocker worth checking out.”

I’m starting to like I Trapped the Devil more and more as time goes by. It’s small, and not exactly substantial by any stretch of the imagination. But it’s really well directed by Josh Lobo and evocatively shot by Bryce Holden, while Burke’s performance is nothing less than exceptional. The film strikes just the right creepily unsettling mood for every one of its brief 82 minutes, its languid pace casting a demonic spell I won’t soon forget.

I Trapped the Devil isn’t going to end up on my end-of-year list of 2019’s best horror movies, but that doesn’t make it any less memorable or worthwhile. Writer/director Josh Lobo manufactures a consistently unsettling sense of building menace and dread, while actress Susan Burke delivers an outstanding performance in the middle of all of this discombobulating psychological mayhem. Scream! Factory has delivered a nifty little Blu-ray for this release, one fans will certainly be happy to add to their personal libraries almost as soon as it goes on sale. 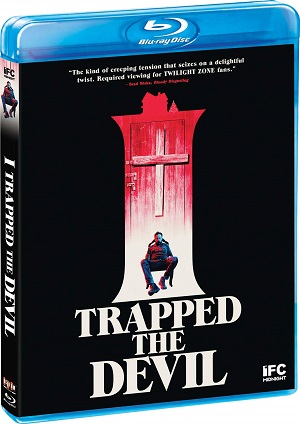