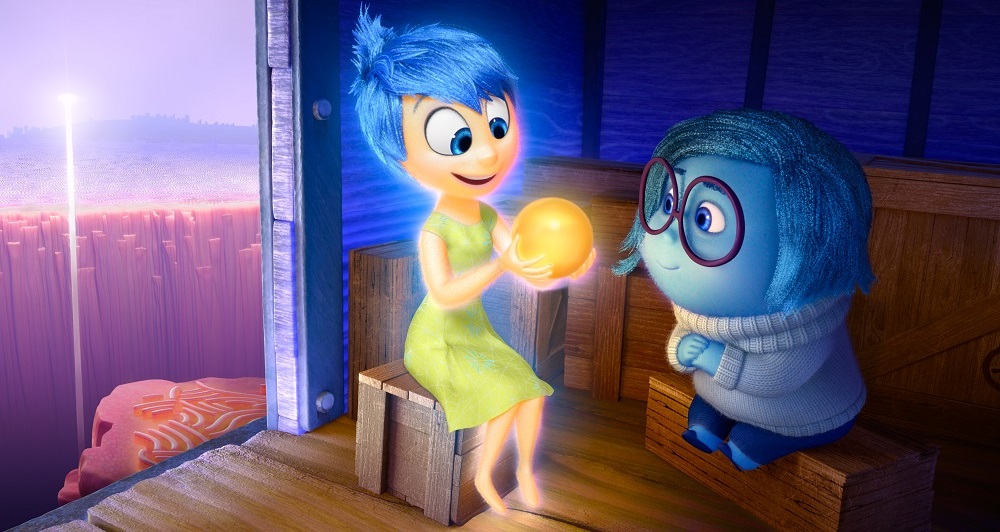 Imaginative Inside Out a Magical Mind Trip

Riley Davis (voiced by Kaitlyn Dias) just turned 11. Her loving parents (Diane Lane, Kyle MacLachlan) have changed her world by up and moving them all from a small Minnesota town to the expansive wilds of San Francisco, CA. She’s left her friends, her junior hockey team and everything else she holds near a dear behind, finding herself in an entirely new place absent of anything recognizably concrete to grasp onto for support.

This is an engaging enough setup for a story in and of itself, and if that were that story Inside Out was interested in I’d probably have been curious to see how the animation wizards at Pixar were going to explore it. Except, for directors Pete Docter and Ronaldo Del Carmen, for their fellow screenwriters Meg LeFauve and Josh Cooley, this isn’t the story they’ve chosen to tell. Or, to be a little more exact, the using of a traditional narrative model to tell it isn’t in any of the filmmakers’ master plans.

Instead, what they’ve chosen to do is look at Riley’s problems and her journey from inside her brain. Literally. Everything is examined from the perspective of her five dominant emotions, Joy (Amy Poehler), Sadness (Phyllis Smith), Fear (Bill Hader), Anger (Lewis Black) and Disgust (Mindy Kaling) all helping the child figure out what she wants to do and the best course of action to take once she does so. Together, they’re responsible for forming Riley’s personality, setting the child on an evolutionary path for her life helping her transform into the fully-formed person she’ll one day become.

It’s as novel a way to tell a story as anything the Disney-owned animation powerhouse has ever come up with, and alongside Wall•E, Ratatouille and Up is arguably Pixar’s most ambitious effort to date. It’s as cerebral and as esoteric a concept as anything I could have imagined, Docter and company creating this entire world inside the brain full of its own quirks, components, workers and mechanisms that’s innovatively unique yet just as easy to comfortably accept. Everything makes logical sense, all pieces fitting together in melodious harmony, Riley’s brain home to all sorts of mysteries the answers to which will influence whether or not she ultimately accepts the move to San Francisco.

What’s fascinating is just how many levels this ingenious bit of storytelling virtuosity works on. The youngest of minds will be mesmerized by the dazzling colors and the enchanting characters, while more seasoned viewers will be just as deeply engrossed by the complexity of the themes being examined. The inventiveness mixed with the empowering intelligence astounds and captivates, while the deeply personal human story is one every person everywhere can relate to in at least some small fashion or another.

Of the five emotions vying to shepherd Riley towards her goals, Joy is the one all the others bow to. All others, save Sadness. While she’s fine with Joy running the ship that doesn’t mean she doesn’t have interest in what is happening and why to their evolving human host. She looks at memories and events in Riley’s life from a point of view completely different than all of the others, thus her and Joy don’t always see eye-to-eye as to what moments are of true significance and why.

Docter and Del Carmen fashion what they label as “Islands of Personality” to signify Riley’s core emotional growths, things like “Family Island,” “Goofball Island” and “Hockey Island” powering her wants and desires throughout any given day. There are little alcoves for things like “Abstract Thought,” while there’s a whole production house entirely devoted to staging dreams based on whatever it is the 11-year-old has been pondering and obsessing over at any given time. How certain memories remain in the recesses of the brain for eternity is discussed, as are why others appear to be lost to the ravages of time in a Grand Canyon-sized abyss of forgotten dormancy. There’s also reason given why certain songs, ditties and inconsequential bits of melodic nothingness get up into the brain as if stuck on repeat, the answer a brilliantly funny running gag that builds to a glorious laugh-out-loud payoff.

There is a central plot, mostly revolving around Joy and Sadness alone in the recesses of Riley’s mind but also concerning Fear, Anger and Disgust suddenly forced to help the youngster make her decisions without the input of their two fellow companions, but I find myself reticent to talk too much about any of that. There is something to be said about discovering what Inside Out has to offer without much in the way of foreknowledge. Magnificently scored by Michael Giacchino (Jurassic World), beautifully voiced by its entire cast (including a fabulous Richard Kind as imaginary friend Bing Bong, who deserves some kind – any kind – of award recognition for his genius), the movie is another triumph for the animation powerhouse. In fact, with all their Oscars, with all their recognition, it might just be Pixar’s best film yet. Imagine that? 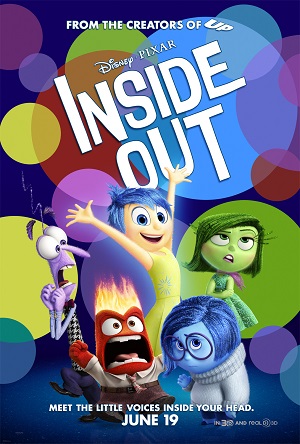