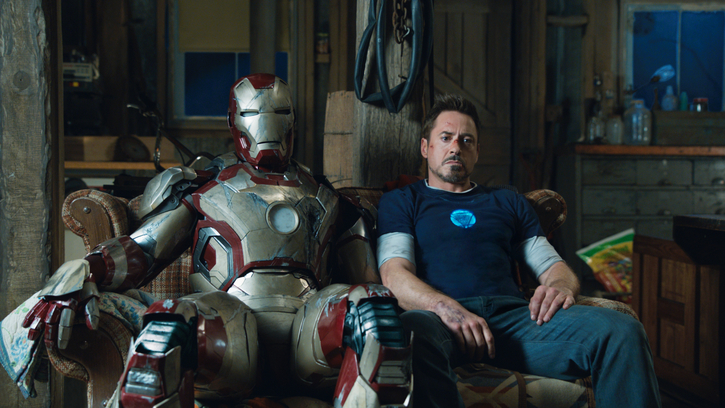 Iron Man Flies Once More for His Third Solo Adventure

The best review of Iron Man 3 is the one I overheard said by a nine-year-old walking out of the theatre. He said, and I quote, “It was good, best of all three, but it was shorter than The Avengers but felt longer. Why is that?” 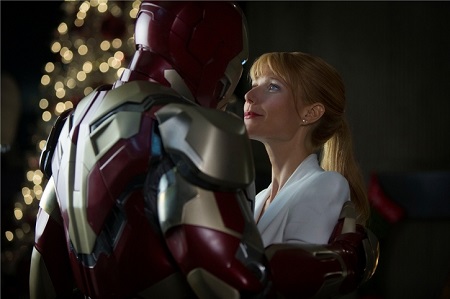 I can’t say I know the answer to his question, but I can admit to feeling exactly the same on all counts. This third entry in the Tony Stark saga, the character still sarcastically portrayed by Robert Downey, Jr. with self-effacing aplomb, is the best overall film over the trilogy. Start to finish, beginning to end, I enjoyed this one more than either of its two predecessors, no question. At the same time, at 130 minutes this trilogy capper (and unofficial start to what Marvel is calling ‘Phase II’) does feel long, and as entertainingly breezy as much of this is the fact I felt every second of it and my butt grew weary sitting in my theatre seat does speak volumes.

I think the simple truth is that these Marvel adventures, for all their flash, for all their style, for all the love and care the comic book impresarios put into them, are beginning to seem somewhat disposable. The Avengers proved that the standalone epics that came before it were nothing more than prequels getting audiences ready for the big whiz-bang of that interstellar superhero monster mash, and now that Phase II has officially begun that’s sort of how this one feels as well. As self-contained as the story is the impression that everything happening to Tony, his trusted confidant Pepper Potts (Gwyneth Paltrow), military attaché (and otherwise sidekick) Colonel James Rhodes (Don Cheadle) a.k.a. War Machine (a.k.a. Iron Patriot) and all the rest involved with this madness is nothing more than a precursor for the next time S.H.I.E.L.D.s’ agents suit up for a second tussle with an interstellar combatant is sadly omnipresent.

At the same time, hiring Shane Black to direct was a minor stroke of genius, the Kiss Kiss Bang Bang filmmaker reteaming with that film’s star allowing Downey to breathe new life into a character that was on the verge of becoming stale. Crafting the script with Pacific Rim scribe Drew Pearce, Black and company have literally stripped Tony bare, the billionaire inventor dealing with post-traumatic stress issues caused by his travels into the New York wormhole making him rethink his role as superhero like he never has before. Downey eats this up, gobbling all the complicated emotional nuances of the situation with rabid relish, hungrily making mincemeat of the material in ways that allow the character to feel fresh even though this is the fourth time in five years he’s played the guy.

Better, the filmmakers have given him a scenario indicative of the here and now. A terrorist calling himself The Mandarin (Ben Kingsley) is rampaging across the globe, a trail of mysterious explosions littered with bodies following behind him. Mixed up in all of this are cocky scientist Dr. Aldrich Killian (Guy Pearce), a man whom Tony slighted over a decade prior, and brilliant botanist Dr. Maya Hansen (Rebecca Hall), another figure from the hero’s past whose genius is potentially second only to his own.

How are they all connected? What do they have to do with the mysterious threats against the President of the United States (William Sadler) and the bizarre misleading of Col. Rhodes and his international duties as Iron Patriot? All is revealed bit by bit, layer by layer, Black and Pearce keeping their cards semi-close to the chest only doling out information as needed in order for the audience to put things together at roughly the same rate Tony does.

It’s great, filled with superb set pieces and moments, not the least of which is a dynamic attack on the Stark mansion that had the majority of the preview audience sitting on the edge of their seats holding their breath, and I can’t say I was ever bored by anything that was going on. At the same time, there is an almost television-like efficiency that can grow stale, nothing ever popping out or calling attention to itself in a way I could ever say was entirely memorable. Little sequences here and there were terrific, sure, but by the time all was said and done I had trouble remembering what the fuss was about, and as much as I enjoyed myself I can’t say there was a part of me that wanted to go back inside the screening room to watch the film again. 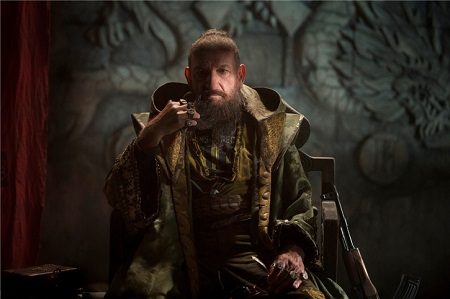 Still, Downey is great, that I cannot deny. Better, Paltrow is finally given more to do, actually getting an opportunity to dish out some punishment instead of standing in the corner twittering like a stereotypical wallflower. Additionally, unlike the two predecessors, and to a lesser extent also unlike The Avengers, Black doesn’t muck up the final battle, and instead of showcasing a guy in a robot suit beat up on a bunch of similar CGI cartoon figures he puts Downey on the playing field in a way that feels authentic. There is a semblance of danger to the mayhem that was missing from Tony Stark’s last two individual escapades, and for that fact alone I cannot help but smile.

There’s more, not the least of which is some marvelous work from Kingsley that both stole the show and genuinely surprised me, no small feat if I say so myself. Be that as it may, and for all my enthusiasm and praise, Iron Man 3 is still nothing more than an appetizer for the forthcoming Avengers 2. While I liked the movie I can’t say I was blown away. I certainly don’t begrudge anyone from buying a ticket, that is true, but I can’t help but shake the feeling we’d all be better served to rent this, as well as the second Thor and Captain America flicks hitting theatres over the coming year, and watch them at home the week before the group from S.H.I.E.L.D. gets back together in the summer of 2015. 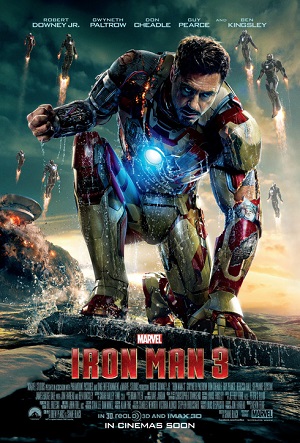