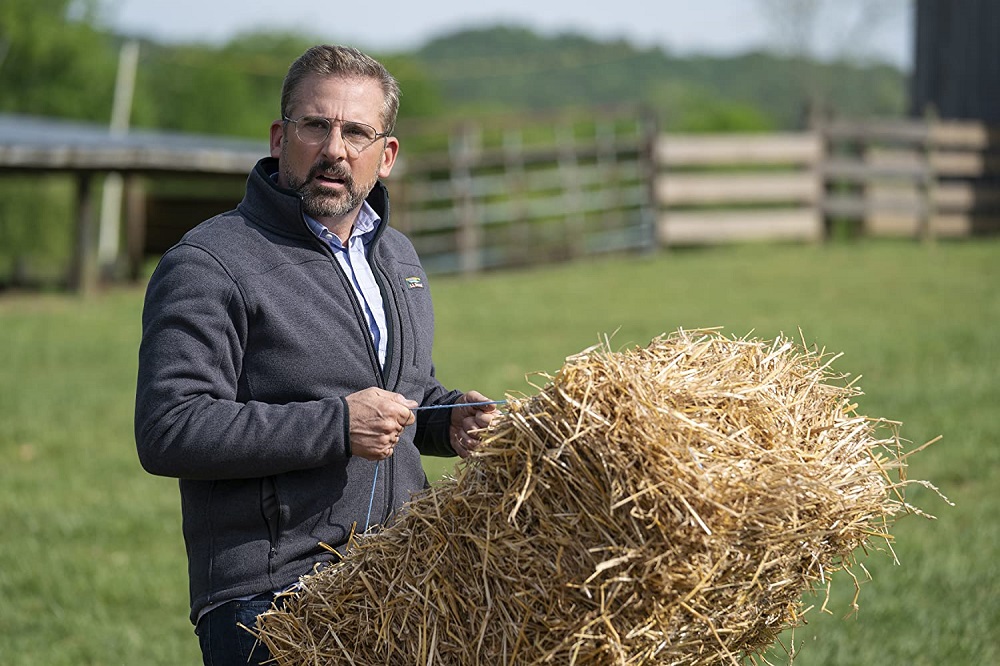 I can’t say I felt much more than a case of mild disappointment when writer/director Jon Stewart’s (Rosewater) star-studded political satire Irresistible came to an end. I liked the performances from Steve Carell and Chris Cooper, and I definitely wished that a delightfully scene-stealing Rose Byrne had been given a bit more to do. Other than that? I can’t say the former “Daily Show” host’s latest feature did a heck of a lot for me one way or the other.

Then I sat on it for a couple of days, and let me tell you my blood began to boil. Maybe this has more to do with current events more than it does anything else, but the level of “Whataboutism” and “Bothsidesism” that Stewart engages in feels much too egregious and even more frustratingly facile than it does anything positive. I kind of loathed that aspect of the film, the whole thing comes across as a major slap in the face as it assertively panders in ways that are as exploitive as they are insincere.

I’m certain the filmmaker means well in his attempt to showcase modern political and journalistic hypocrisy for the ugly and ungainly circus that it is. This does not mean many of his blatantly obvious talking points hit home in a way that could be construed as materially effective. Irresistible is a giant mess that rarely entertains, Stewart’s whimsical pontifications sadly falling on deaf ears.

In the wake of Hillary Clinton’s stunning 2016 loss to Donald Trump, two years later Democratic National Committee (DNC) political strategist Gary Zimmer (Carell) sees a ray of midwestern hope in the form of farmer and retired Marine Jack Hastings (Cooper). After a video of this man at a city council meeting supporting the rights of his small community’s immigrant laborers goes viral, Zimmer sees an opportunity. He’ll convince Hastings to run for Mayor on the Democratic ticket, and in doing so believes the DNC will build new inroads into rural communities they’ll be able to nationalize against the Republicans in the future.

This catches the eye of Zimmer’s Republican doppelgänger Faith Brewster (Byrne), and she’s not above mobilizing her entire party’s massive war chest into this small little local contest if it means she’ll be able to make the Democrats look bad. Soon the national news media is covering this story as if it were Clinton/Trump 2.0, CNN, FOX, MSNBC and others relentless in their dissection of this mayoral race even if what they are all collectively saying adds up to a big fat zero.

So, Stewart does have some good ideas and even better insights. He’s calling out the news media for making mountains out of molehills while at the same time holding them accountable for not reporting on the more important news staring them straight in the face. He’s taking to task the Supreme Court for their decision in Citizen’s United and the U.S. Congress for doing absolutely nothing to get so-called “dark money” out of politics.

What Stewart does not do is dig particularly deep into either issue. Worse, he brings up a plethora of additional ones that fall immediately flat. Not because they’re invalid (most of them are worthwhile and in need of being heard), but more because he introduces them in such a ham-fisted, disaffected manner that whatever he is attempting to say comes across like clueless nonsense. Stewart beats the viewer didactically over the head with his various talking points but never clearly enunciates or clarifies what it is exactly many of them are. It’s a lot of sound and fury signifying nothing, and if that isn’t disappointing I’m not sure what else would be.

In fairness, Carell is quite good. He’s got a scene where Zimmer starts breaking down in angry frustrated hysterics during a cable news interview alongside Brewster where the latter starts randomly spouting a cavalcade of obvious lies and the reporter speaking to them allows her to go on and on unabated that’s pretty much perfect. Carell’s explosions as he witnesses moments like these are always good for a chuckle or two, and I do appreciate that the former Oscar-nominee is at least attempting to give a rich, three-dimensional performance even when Stewart’s script seems to be oddly determined to keep him from doing so.

Cooper is also moderately terrific, and while his character tends to disappear for long stretches of the narrative far too often, whenever the actor was up on the screen I admit I sat a little straighter in my seat curious to see what it was he was going to do next. As for Byrne, she’s a scene-stealing firebrand making the most out of every second she has in the film. Problem is, she has precious few of those seconds, and because of that Brewster’s impact upon the proceedings is borderline inconsequential.

Look, Stewart is a smart guy, and I get what he is trying to do. Much of what he is articulating needs to get out into the public amphitheater. But with Irresistible he’s mostly preaching to the choir, and I’m not sure it’s the chorus he was hoping to have singing his praises. Stewart’s movie is well-intentioned. Yet it is just as equally misguided, and for all its good intentions, star power and expert cinematic craftsmanship, this is a milquetoast political satire I refuse to endorse. 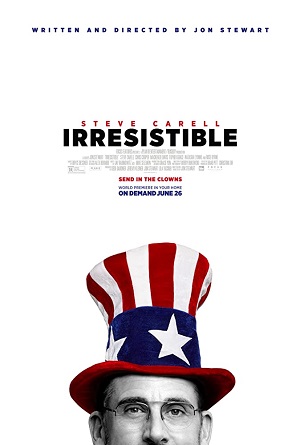