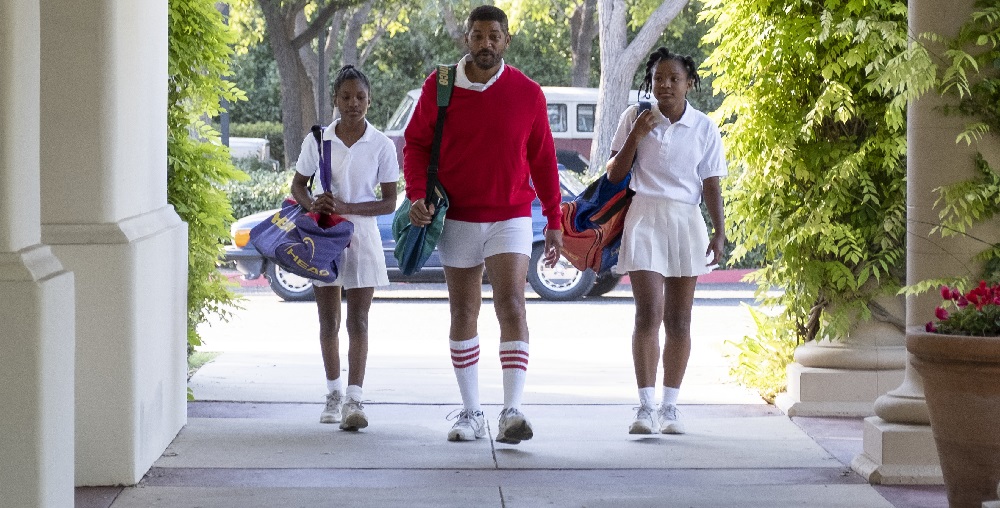 Richard Williams (Will Smith) has a plan. A 78-page plan, to be specific, outlining the future as he sees it for daughters Venus (Saniyya Sidney) and Serena (Demi Singleton). Along with his wife Oracene “Brandy” Williams (Aunjanue Ellis) and the pair’s other three children Tunde (Mikayla Lashae Bartholomew), Isha (Daniele Lawson) and Layla (Layla Crawford), the whole family is determined to help the girls to become tennis superstars.

Impossible? Two little Black girls from Compton — coached by their self-taught father and assisted by their equally amateur mother, practicing on public courts and utilizing subpar equipment — are going to become tennis royalty, playing Center Court at Wimbledon and the US Open?

Definitely impossible. At least, that’s what everyone keeps telling Richard as they kindly shut the door in his face. After all, this just isn’t the road to professional tennis superstardom. What Venus and Serena are attempting to do, that’s just not how it’s done.

We already know how all of this works out. Venus Williams has seven Grand Slam singles titles, including five Wimbledon championships. Serena Williams is in the conversation as the greatest tennis player — male or female — of all time, what with 39 career Grand Slam titles and the record for being ranked number one in the world the longest in the Open Era. These two women changed the game of professional tennis forever, so it isn’t like the outcome of the new inspirational sports drama King Richard is ever in doubt.

That does not make the film any less spectacular. Directed with passionate flair by Reinaldo Marcus Green (Monsters and Men) and featuring a rich, meticulously layered screenplay written by Zach Baylin, this is the kind of motion picture one wants to watch in a full auditorium with a cheering crowd bursting at the seams to applaud. It is a thoughtful, energetic drama overflowing in excitement. I loved the heck out of it, and I have a sneaky suspicion the majority of audiences will end up feeling the same.

The focal point is Richard. I love that, while they’re undeniably laudatory of Venus and Serena’s father, Green and Baylin don’t take it easy on him, either. He is a flawed man with high ideals who makes several mistakes even when his heart is in the right place. Richard has a past he can’t escape from and very rarely acknowledges. He is stubborn and a bit of a self-promoter, and even when his daughters or his wife beg him to reconsider a decision, he almost always refuses to change his mind.

Smith is masterful. This is the best the actor has been since his stellar transformation into Muhammad Ali 20 years ago for director Michael Mann. It is a bravura reminder of just how remarkable Smith can be when he sets his mind to it. He digs into Richard, embodying him right down to the last molecule. His vocal inflections and unbalanced physicality allow him to disappear into the character, and there were moments where I forgot I was watching Will Smith entirely. He’s that good.

Ellis nearly matches him. She has moments of hushed magnificence that caught me by surprise. A brief subplot of Brandy stepping into train Serena when Venus gets free tutelage from legendary coach Paul Cohen (Tony Goldwyn) is ferociously focused, with Ellis showcasing an intense form of motherly devotion that’s sublime.

Even better is a moment later on where her character has to stand toe-to-toe with Richard and remind him that their girls have not achieved their tennis opportunities all because of him. Ellis and Smith stare one another down, but not in a way that feels melodramatic or inorganically schmaltzy. Instead, their confrontation has genuine heat, making what happens next after their face-off all the more heartrendingly authentic.

All of the supporting players are terrific, most notably Jon Bernthal as Rick Macci, the first coach to take on both Venus and Serena. There are also some lovely set pieces, directed with confident fury by Green, particularly a montage of Venus winning countless trophies during her brief time as a juniors competitor. It helps that both director of photography Robert Elswit (There Will Be Blood) and editor Pamela Martin (Battle of the Sexes) are at the top of the respective games, so the film has a bracingly euphoric kinetic momentum that’s due in large part to them.

But special mention needs to be given to Sidney and Singleton. These two youngsters are sensational as Venus and Serena, and while the former gets a bit more to do, this does not mean the latter is at all content — much like the woman she’s portraying — to sit very long in her costar’s shadow. Sidney and Singleton have a naturalistic back and forth I reveled in, and if you’d have given me an extra hour of the two of them interacting on and off the tennis court, that would have been perfectly fine.

Are there hiccups? Certainly. How could there not be? Not all of this works, and a couple of scenes and sequences do fall annoyingly flat. But those moments are few and far between. King Richard is a spellbinding biopic of a complicated man and his two incredible daughters, all working together to do what was previously considered impossible. This is one of 2021’s best films. See it at once. 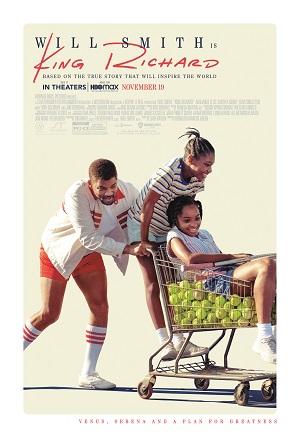