It is 1973, and the Vietnam War is coming to an end. The secret government agency known as Monarch is on its last legs, but head honcho Bill Randa (John Goodman) believes now is the time to convince the Senators in charge of his funding to give him one more opportunity to prove his wild theories. He and his chief geologist Houston Brooks (Corey Hawkins) have discovered a seemingly lost land mass in the middle of the Pacific Ocean, a location given the mysterious moniker of Skull Island because everyone who has ever gone in search of it was never heard from again. Randa believes he can prove his suspicions about ancient creatures and lost civilizations by going there, he only needs a little extra money and a military escort to help him do it. 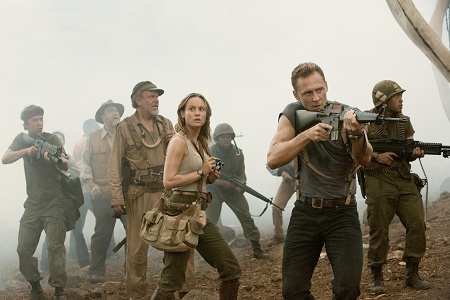 Incredibly, he’s given the go-ahead to move ahead with his plan. Assigned a battle-hardened chopper unit led by the demanding Lt. Colonel Preston Packard (Samuel L. Jackson), hiring former S.A.S. operative and crack jungle tracker James Conrad (Tom Hiddleston) to be his guide, Randa believes his elite team to explore the island is now set. He even acquires the services of award-winning war photographer Mason Weaver (Brie Larson) to document the journey, all of them ready to leap into the unknown for their own personal reasons, each searching for answers they hope to find while investigating this strange, new world.

Needless to say, nothing goes as the group plans in director Jordan Vogt-Roberts’ Kong: Skull Island, a visually phantasmagoric action-fantasy-comedy hybrid that plays out as something of an unhinged, shaggy-eared prequel to Gareth Edwards’ excellent 2014 reinterpretation of Toho Studio’s legendary Godzilla. Having very little if anything to do with either Merian C. Cooper’s 1933 classic King Kong or its lavish, richly ambitious 2005 Peter Jackson remake, this movie presents the giant ape in a heroically selfless light, portraying him as a protector of the natural order those with any sense don’t go out of their way to foolishly mess around with.

The thing about this new take, however, is that, structurally and tonally, the film is a scattershot affair that never quite knows what it is doing. The script by Dan Gilroy (Nightcrawler), Max Borenstein (Godzilla) and Derek Connolly (Jurassic World) is a crazy hodgepodge of ideas and concepts that are continually at war with one another. At one moment the film is a broad comedy; at other points it is deathly serious. There are times where it becomes a giddy giant monster frolic in the vein of the Toho Godzilla epics made over the past six-plus decades; at others it feels like an idiotic offshoot of that ghastly Roland Emmerich remake released in 1998. It’s a loopy, carnage-fueled extravaganza that makes obvious allusions to everything from Apocalypse Now to Jurassic Park, Platoon to Dr. Strangelove, and does so without any potential clue as to why it is or what the point of doing so might actually be.

Vogt-Roberts, coming off his micro-budget teen comedy The Kings of Summer, proves to have better visual chops than anticipated, the helicopter troop’s initial confrontation with Kong positively glorious. Equal parts suspenseful and terrifying, this action-filled set piece moves like lightning, each crash landing and explosion a brutish jolt of excitement that held me spellbound. While he doesn’t possess the precision or cinematic virtuosity that Edwards displayed with his Godzilla and perfected with Rogue One: A Star Wars Story, Vogt-Roberts’s pugilistic elasticity where it comes to the signature monster attacks is still nothing to be scoffed at. 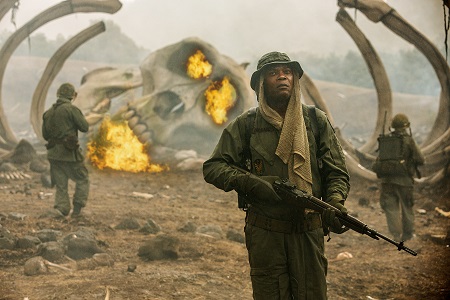 It’s just all so dumb, and there are multiple points where it feels like each member of the cast is existing in an entirely different motion picture. Jackson, a nod to his doomed Jurassic Park character aside, is all steely-eyed intensity as he battles demons born on Vietnam battlefields. John C. Reilly, portraying a WWII fighter pilot stranded on the island for almost three decades, is all manically cartoonish, wild-eyed buffoonery, his performance a hysteric bit of genius that needs to be seen to be believed. As for members like Hiddleston and Larson, they’re in steely adventure serial hero mode in the vein of Indiana Jones or an old school 1930s Hollywood serial, going for the gung-ho and the daring-do if precious little else, letting their mutual natural charisma speak for itself.

I’m not sure how this sets up the so-called “MonsterVerse” Warner Bros. is attempting to create, and while there are plenty of hints towards future installments featuring Mothra, Rodan, King Ghidorah and, of course, the big behemoth Gojira himself, the tonal disparity between Godzilla and this feature are undeniably obvious. But as ludicrous and as unfocused as it all might be, Kong: Skull Island kept me amused for practically every second of its two-hour running time. While not a great movie, it’s still an awfully fun one, and as big budget, visually resplendent monster mashes go I’m somewhat eager to give it another look relatively soon. 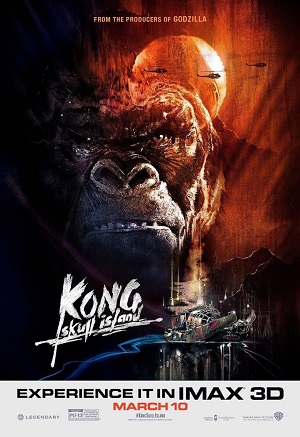