Everything Still (Sorta) Awesome in The LEGO Movie 2

It’s been five years since the events of Taco Tuesday, the citizens of the city once known as Bricksburg now living in a dystopian wasteland ever since the invaders from Planet DUPLO came down from the stars and eradicated all they held dear. Each time they rebuilt these interstellar marauders returned, keeping LEGO society in a constant state of morose unease where good vibes and polite conversation have all but disappeared. Even Lucy, a.k.a. Wyldstyle (voiced by Elizabeth Banks), one of the heroes of Taco Tuesday, has begun to think their civilization is on the brink of collapse, and if not for her closest compatriot Emmet’s (Chris Pratt) continual upbeat optimistic look at life and impossibly unfazed sunny demeanor she might have given up hope for salvation ages ago.

It helps that the DUPLO invaders have not made an appearance in ages and things are starting to look up as they haven’t in quite some time. But just as Wyldstyle is beginning to think Emmet might be right and everything could be awesome once again, a new visitor calling herself General Mayhem (Stephanie Beatriz) arrives to mess things up even more than they already were. She kidnaps Wyldstyle, Batman (Will Arnett), Unikitty (Alison Brie), MetalBeard (Nick Offerman) and astronaut Benny (Charlie Day) in order to present them to her beloved monarch Queen Watevra Wa’Nabi (Tiffany Haddish). Emmet builds his own spaceship and quickly follows after them, meeting his broody, vest-wearing and raptor-loving doppelgänger Rex Dangervest during his travels, this gutsy, angst-ridden space traveler agreeing to help him stop the Queen’s plans for universal domination and save his friends from danger.

That The LEGO Movie 2: The Second Part isn’t as imaginative or as surprising as its 2014 predecessor is hardly a surprise. That wondrous animated marvel was a vibrant, entertainingly thought-provoking shock to the system, filmmakers Phil Lord and Christopher Miller proving instantaneously they were far more than 21 Jump Street-style one-trick ponies. Their film was an eye-popping marvel full of twists and turns that also had some rather emotionally affecting life lessons to teach along the way to its marvelously unexpected conclusion, making The LEGO Movie one of the more memorably charming animated features to see a theatrical release this decade.

That’s a pretty tall staircase a sequel has to climb in order to just equal the picture that came before it, and while Lord, Miller and new director Mike Mitchell (Trolls) give it their best shot unfortunately the trio never quite set foot upon the top step. Still, there’s plenty to love about this follow-up, this wildly idiosyncratic animated adventure far more entertaining than either of the other LEGO-inspired movies (The LEGO Batman Movie, The LEGO Ninjago Movie) that have been released since the first The LEGO Movie took the box office by storm five years ago. This latest journey with Emmet, Wyldstyle, Batman, Unikitty and other fan-favorite characters overflows in likable moments certain to delight audiences of all ages, while Queen Watevra Wa’Nabi is a lovely new addition to the cast who helps give this story a pleasing girl-power shimmer that’s empoweringly divine.

The story is essentially split into two halves with a handful of live-action interstitials plopped in randomly to help augment the emotional core of what it is Lord and Miller’s complex script is attempting to say. The first section involves Wyldstyle and her abducted friends meeting Queen Watevra Wa’Nabi and learning about her nefarious-sounding plans to unite LEGO and DUPLO worlds into one harmonious utopia. The second revolves around Emmet’s adventures with Rex, the latter oddly insistent in his attempts to try and convince the former he has to emotionally harden himself against life’s negative aspects and to stop being so gosh darn nice all the time. These dueling narrative strands entangle themselves with one another nicely, everything building to a shocking act of revolution that might not be as heroic or as egalitarian as it might initially appear to be.

As for the live-action bits, while Will Ferrell’s voice can oftentimes be heard in the background, this time it is Maya Rudolph who is front and center, the scene-stealing actress portraying the harried mother of two precocious children who is inching closer and closer to the end of her rope. This brother-sister tandem, Finn (Jadon Sand) and Bianca (The Florida Project star Brooklynn Prince), can’t seem to stop fighting, the two continually unable to find common ground as they play with their favorite toys. This leads their mom to make a proclamation just about every parent can likely relate to. At the same time, it also puts the continued existence of Emmet, Wyldstyle and their friends in jeopardy, in many ways Finn and Bianca the key to their collective salvation whether they all realize it or not.

That’s a lot to process, and goodness knows Lord and Miller dig into the minutia of all this with a stunning amount of detail. Yet, as big as their pop culture bag of tricks might be and as heartfelt as their connection to this eclectic set of character undeniably is, there were a number of moments where I personally found a lot of this moderately redundant, particularly when the sequel is gallivanting around with Emmet and Rex. I couldn’t help but feel like their part of the narrative kept losing focus, and as incredible as individual set pieces could be there were numerous points where they also felt more like time-wasting filler more than they did essential pieces of the plot. Also, as good as Rudolph, Sand and Prince are the trips into the real world kept happening far too frequently, stalling out the proceedings in order to provide brief explosions of exposition I didn’t think were entirely necessary.

Even so, this sequel is a great deal of fun. Many of the more insightful gags are laced with a knowing emotional authenticity that’s oftentimes sublime, while many of the visuals, especially as they pertain to the iconoclastic shapeshifting Queen Watevra Wa’Nabi, are spectacular. A couple of the songs are certain to get stuck inside the viewer’s head (and that’s by design), while the vocal work across the board is excellent. The LEGO Movie 2: The Second Part might not be as awesome as its forerunner but that doesn’t make it any less worthwhile, this amusing follow-up an irreverent gem that even with a few minor misgivings I couldn’t help but enjoy. 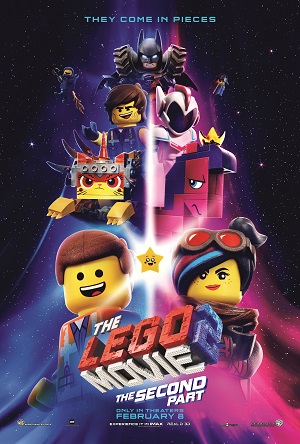