Luo Hongwu (Huang Jue) has returned to his hometown of Kaili after roughly two decades. He reminisces about his childhood, his various adventures with a former best friend nicknamed “Wildcat” and other random acts of madness that led him to leave all those years prior. Most of all he recollects about a mysterious woman, he thinks she was named Wan Quiwen (Tang Wei), and finds himself now compelled to see if he can find her. During his search past and present collide hurtling him through time and space in an increasingly nonconventional manner, his quest culminating in a small, secluded town known as Dangmai, a place where fantasy and reality seemingly live together in cryptic harmony.

I’m no expert on Chinese filmmaker Bi Gan’s well-regarded debut Kaili Blues. I haven’t seen it, and even though a lot of people I respect made a great deal of fuss over the film, for whatever reason I’ve never taken the time to give it a look. As such, I do not know how it compares to his ambitiously moody sophomore effort Long Day’s Journey Into Night, an intimately personal and emotionally adventurous drama that has nothing to do with the Eugene O’Neill play it’s lifted its English language title from. What I can say is that this motion picture is nothing if not original, the whole thing a piece of existential visual poetry featuring a final hour so staggeringly gorgeous and hypnotically fascinating I seriously doubt I’ll see its like for the remainder of 2019.

None of which means I personally understood what it was I had just watched. A part of me feels the instantaneous need to dive in again immediately, the try and absorb more of this strange, dream-like, vaguely film noir-reminiscent universe Gan has fashioned for his chain-smoking hero Hongwu to wander around in not nearly as aimlessly as it first appears. Another section of my psyche wonders what the fuss is all about, thinks this search for answers and meaning in a universe that lacks precious little of either element is nothing more than leisurely-paced nonsense. The whole thing is a peculiar descent into memory, family, forgiveness, longing and potentially even love that kept me sitting at arm’s length as the story bobbed and weaved randomly along as if it were a kite being blown across the sky by the wind. It is a movie that forgoes most of the normal cinematic rules as it attempts to make up new ones, not all of what it comes up with working out as comfortably or as irresistibly as I can only assume they were supposed to.

At least, that’s my best guess. Gan toyed with my mind something fierce, and by the time Hongwu literally descended into the 3-D landscape of Dangmai I almost stopped caring entirely about anything that was going on. But then the filmmaker unleashed such a jaw-dropping visual feast that I couldn’t take my eyes off of the screen. He coupled those miraculous sights and sounds with a pair of performances from Jue and Wei that left me in a constant state of awe. The veteran actors navigate their way around this one-shot hour of cinematic virtuosity with a gripping resilience that’s magnificent, each giving complicated, fearlessly raw performances that only augment the inherent dramatic sensitivity that’s refreshingly on full display.

It’s hard to dig too fully into any of what Gan is doing as to do so would give away key insights into what it is I can only assume the filmmaker is attempting to accomplish. Just know this last hour is not just some expertly constructed technical feat devoid of emotional resonance. Just the opposite. The wispy, ghost-like atmosphere generated by this single take approach allows for the sequence to become an existential fantasy overflowing in pain, pathos, forgiveness and selfless understanding. Each step Hongwu takes is one inch closer to his hopefully being able to put past demons to rest and move forward in his life away from those missteps, mistakes and missed opportunities that have haunted him for almost 20 years. While it is unclear if this happens, or for that matter if it is even supposed to happen, the feeling that it still might come to pass anyhow permeates each frame of the film, giving things a poignant eloquence that’s second to none.

At a 133-minutes the movie is unquestionably long. More importantly, Gan is a director who is utterly unafraid to take his time, letting his story play itself out at its own measured pace while appearing not to care if some in the audience find their mind beginning to wander as they wait patiently for something explosive to happen. He has also enlisted three cinematographers, Yao Hung-I, Dong Jinsong and David Chizallet, to help him shoot everything he imagined for his various characters to experience, the film having a somewhat discordant quality that’s emotionally discombobulating yet at the same time seems equally essential to the film being able to cast the type of mesmeric spell it crafts with such fastidious ease. Finally, a few of the supporting actors play dual roles introduced and followed throughout the story, Wei included, this curious bit of deception adding an extra layer of alluring surrealistic whimsy that caught me by surprise.

As the screen faded to black I can’t say I fully understood all of what Gan’s visually rambunctious drama of memory, regret and intimacy was trying to tell me. I also will not claim that the unhurried pace didn’t almost put me to sleep on more than one occasion. Be all of that as it may Long Day’s Journey Into Night is a piece of cinematic poetry where every syllable, every beat, has wormed its way into my soul and has aggressively refused to release its vice-like grip. It is a divine exercise in acrobatic filmmaking eccentricity, seeing this film in all its theatrical glory a feat of storytelling legerdemain few who witness it firsthand will soon forget. 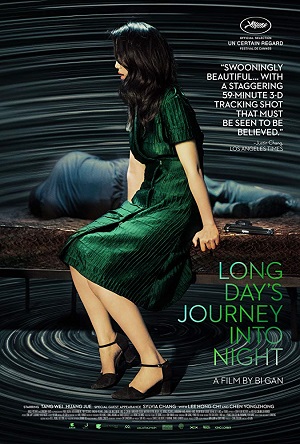