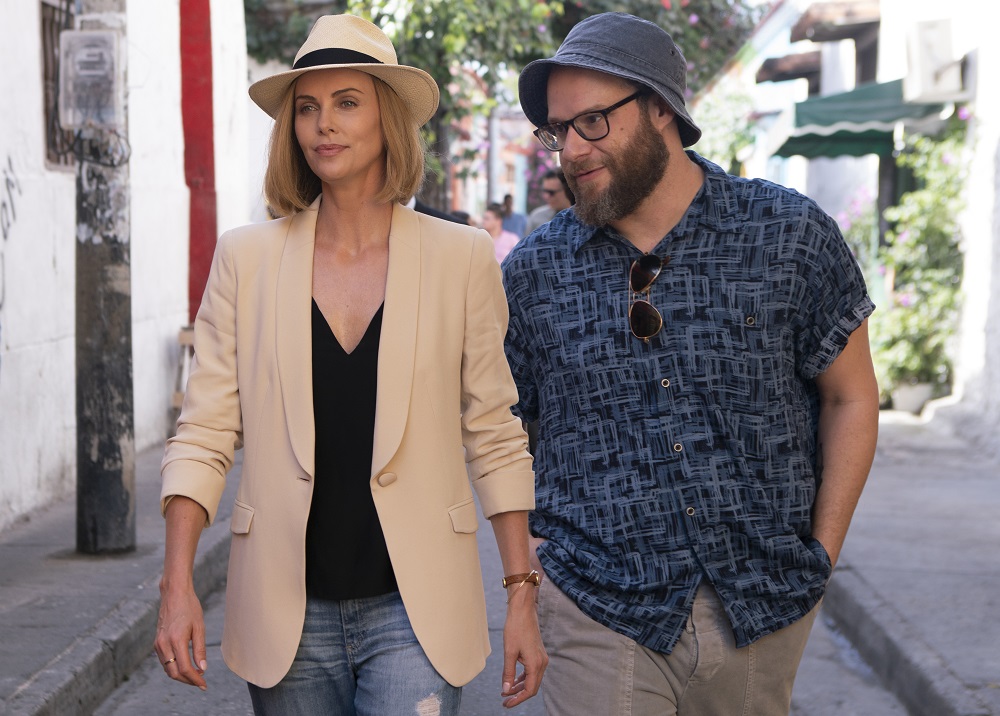 President Chambers (Bob Odenkirk) is not running for a second term. This is wonderful news to his ambitious Secretary of State Charlotte Field (Charlize Theron). Not only does she clandestinely think this former TV star who somehow lucked his way into the Presidency is an idiot, but she also harbors a desire to run for President herself. Yet, as he is incredibly popular with a large cross-section of the American public, Charlotte knows she needs to get Chambers’ endorsement if she is going to have any chance to win the election. He wants her to score an international political victory in order for him to give it to her, and she’s got just the proposal that’s virtually guaranteed to make that happen.

Enter Fred Flarsky (Seth Rogen). He’s a gifted writer who lost his job when his small, independent publication gets bought out be multibillionaire media mogul Parker Wembley (Andy Serkis). Attending a high-class environmental benefit with childhood best friend Lance (O’Shea Jackson Jr.), mainly for the free booze and the opportunity to meet Boyz II Men, much to his embarrassment Fred inadvertently runs into Charlotte. She used to babysit him when she was a Senior and he was a Freshman in high school, and even then the future journalist knew she was destined for greatness. Because of that he’s positive the current Secretary of State doesn’t want to be reminded of the crush he had on her when they were both teenagers, attempting to leave the charity benefit before she realizes he’s there.

It’s a good thing Charlotte is okay with being reminded about the past because otherwise Long Shot wouldn’t exist. Safe to say that the Secretary of State is just fine with being reunited with Fred, so much so she hires him to be a speechwriter as she travels around the globe garnering support for an ambitious plan to combat climate change. This allows Theron and Rogen ample opportunity to interact and play off one another, the two actors sharing surprising chemistry as their working relationship slowly morphs into friendship before finally transforming into something far more amorous in nature. Dan Sterling (The Interview) and Liz Hannah’s (The Post) ambitiously multifaceted script works as both political satire and character-driven romantic comedy, director Jonathan Levine (Warm Bodies, 50/50) handling it all with a confidently relaxed naturalism that mitigates the inherent silliness and implausibility of the fairy tale relationship at the center of the story.

Theron is great, the Oscar-winner proving once again there’s practically nothing she can’t do once the cameras start rolling. She saunters through the film with a magnetic authority that fits her character perfectly, her athletic physicality coupled with an intuitive intelligence that makes Charlotte a natural leader and an imperious force to be reckoned with. But even better are the moments where she does let down her guard, when the actress allows the character’s buried insecurities to briefly come into the light. This gives her extra layers of depth that are incredible, the actress going in directions that are almost always a joy to discover.

There’s a spellbinding bit where, after receiving devastating news, Charlotte convinces Fred to surreptitiously take her out on the town so she can cut loose and blow off steam in a manner that would compel the President to force her resignation if he ever caught wind of what they were doing. This ends up leading to a fantastic scene where the Secretary has to navigate an unforeseen international crisis right at the one moment where she’d rather curl up in bed and sleep for 12 hours. What Theron does during this moment is sensational, the actress delivering bits of laugh-out-loud hysteria that are unexpectedly coupled with a level of mature emotional insight that held me in a state of captivated awe.

Rogen doesn’t necessarily match his costar, but he does raise his game considerably in order to be believable as her romantic partner in political depravity. He gives Fred unanticipated gravitas, and I liked how passionate he was about the things he believed in even if his steadfast pigheadedness sometimes caused a wide variety of angry confrontations that made it almost impossible for others to hear, let alone consider, any of his ideas no matter how good they might be. Rogen’s self-deprecating wherewithal is quite intricate, and there’s always something of a mystifying question mark as to if his character is going to be able to expand his horizons, listen to alternate points of view and accept constructive criticism without giving up on the core ideals that make him who he is.

The supporting cast is universally strong, especially Straight Outta Compton scene-stealer Jackson Jr. and June Diane Raphael as Charlotte’s snarky Chief of Staff Maggie Millikin. The former doesn’t have a lot of scenes but he more than makes the most of them when given the opportunity. As the for the latter, she’s superb, her cutthroat intensity as she spells things out for Fred as to what his job is, what is expected of him and how his hoity-toity high ideals will lead to nothing getting done if he’s not willing to even ponder the concept of a compromise a barnstorming corker of comedic and satirical insight that’s a pleasure to behold.

None of this is very believable, and I honestly think Levine or the two writers don’t mean it to be so. Some of the stuff that happens would never remain a public secret, while a third act turn of events involving a hacked laptop’s webcam doesn’t work nearly as well as the filmmakers intend it to. But at the end of the day this is a fairy tale, one that makes a plethora of valid and prescient points as it pertains to women and what they are allowed to do and the mistakes they’re never going to be forgiven for making once they are in the public eye, but still a fairy tale for sure. Allusions to what happened in 2016 (and to what is still happening right now), especially in regards to big money manipulation of public discourse as well as how having an unqualified nincompoop in the White House is bad for the country, are by design, the more blatantly satirical aspects some of the strongest ones the film has to offer.

Ultimately it is Rogen and especially Theron that make Long Shot work as well as it does. They are a terrific romantic comedy pairing, and the manner in which they organically allow Charlotte and Frank’s relationship to take root and blossom is the primary reason I ended up enjoying this one as much as I did. The two stars are delightful, and if they ever decide to team up again in the future I’ll certainly cast my vote stating this would be something I’d be willing to purchase a ticket to see. 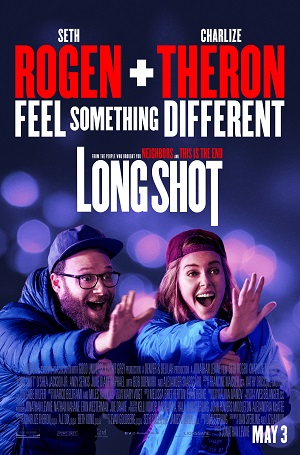