I’m not at all sure where Rian Johnson’s Looper is going to end up ranking inside the pantheon of all-time great time travel science fiction spectacles. What I do know is that the man behind Brick and The Brothers Bloom has certainly raised his personal bar, delivering a labyrinthine tale where good and bad don’t exist while conflicting shades of grey continually scramble to put a vice-like grip on one another’s throats. This an aggressively nasty piece of big budget Hollywood studio popcorn, and I’ll be curious to see how eager general audiences are going to be to scarf it down once they learn just how distastefully bleak much of this is.

That’s all to the good as far as I’m concerned. Johnson has crafted an absorbing piece of sci-fi noir that doesn’t pull its punches and always goes for the jugular. Heroes do some of the most heinous things you could ever possibly imagine. Villains find themselves capable of monumental utterly selfless sacrifice. Children lose their parents (and vice-versa), deadbeat mothers become paragons of virtue and silver-tongued father figures supply the golden parachute all while they’re planning on cutting the strings which connect it to the pack.

The basics revolve around a rundown shell of a downtrodden America circa 2042. Joe (Joseph Gordon-Levitt) is a ‘Looper,’ an assassin assigned nameless targets sent to him at a designated time and place from an undisclosed transport point 30 years in the future. They’re bound and gagged, bars of silver strapped to their backs as payment. It’s a good life, as far as murder-for-hire goes, the only caveat being at some point you’re going to be required to murder your future self, thus canceling your contract and closing the loop connecting past, present and future.

But when Joe’s future self (Bruce Willis) appears in front of him, he is not bound, he is not gagged and there is no bag over his head concealing his identity. He has a plan, warning his other self to stay away from his employers before quickly disappearing into a nearby cornfield. But younger Joe has no intention of letting older Joe run, making the morally ambiguous decision to hunt him down before he can complete whatever mysterious plan has led him back to 2042. With his boss Abe’s (Jeff Daniels) men breathing down both their necks, the two versions of the same killer play a murderous game of cat and mouse, both patiently waiting for their paths to re-cross, the lives of a cagey mother (Emily Blunt) and her troubled child (Pierce Gagnon) mysteriously hang in the balance.

It’s hard not to talk about Looper without revealing its secrets. The movie holds a humongous debt to Chris Markers’ La Jetée, but subtle homage is also made to time travel hallmarks like Robert Zemeckis’ Back to the Future, James Cameron’s The Terminator and George Pal’s The Time Machine as well. There are also elements of Ridley Scott’s Blade Runner, John Boorman’s Point Blank and John Woo’s The Killer for good measure, while facets hinting at Terry Gilliam’s 12 Monkeys, which probably not-so-coincidentally also starred Willis, also abound.

What’s remarkable is how confidently Johnson weaves this all together. There are very few holes in his thesis, and while typical time travel conundrums do raise their head, they never call attention to themselves in a manner that might frustrate or annoy. The story eloquently maintains cohesion throughout, everything leading to an explosively satisfactory conclusion I’m certain fans will be heatedly debating for decades to come.

Even though the movie is shockingly violent, rarely shying away from the more disturbing aspects of the narrative, it’s never oppressively so. That said, this is dark stuff, pretty much right from the jump. Think Willis is here in fan-friendly Die Hard mode? Think again. Under the impression that Gordon-Levitt’s Chow Yun-Fat inspired assassin will undergo a change of heart thanks to the love of a good woman? Maybe, but not in the way a casual viewer might assume.

There is pain in the film, lots of it, human life discarded with such blatantly unforgivable cynicism watching it happen is inherently disturbing. Johnson doesn’t want to titillate, doesn’t try to provide an adrenalin rush. He’s more interested in diving right into humanity’s central core and the inherent narcissism that can oftentimes drive people forward through life, in the process revealing aspects of the human condition that are as despicable as they are riveting.

The acting is excellent. Willis hasn’t been given a role this complex in years, and to see him dig so deep is a nice reminder of how great an actor he can be when he sets his mind to be. Gordon-Levitt is even more impressive, only the wrongheaded idea to give him a face full of prosthetics to make him look more like his balding costar keeping him from attaining perfection. The makeup gives him a glossy doll-like appearance that’s almost unintentionally laughable, and it’s a testament to his abilities as an actor that he not only overcomes this detriment but emotionally excels in ways that are consistently fascinating in their complex minutia.

Looper asks more questions than it can answer, and not every piece of its interior puzzle fits together as nicely as I hoped it would. But overall this is Grade A sci-fi entertainment. Johnson’s film works, and like all great time travel epics, this is one adventure we’re all going to be thinking about far into the unknowable future. 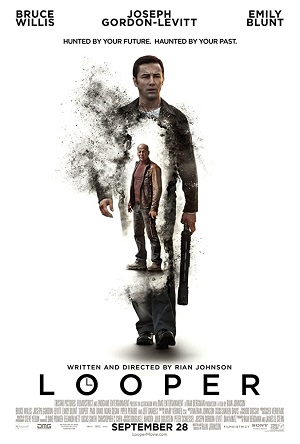