Second Chapter of The Lord of the Rings a Towering Success

Is it too early to say The Lord of the Rings is the best cinematic fantasy trilogy of all time, even with the series’ third installment The Return of the King still a year a way? Based on this second chapter, The Two Towers, it most certainly is not. I cannot imagine, with all three films shot at once, that the climax to this story will be any less of a stunning success than both this film and The Fellowship of the Ring proved to be.

Part two literally hits the ground running. There is no exposition, no quick recap of last year’s Oscar-winning epic, and this sequel is all the better because of this. Even so The Two Towers is fabulously entertaining, if only for its massive scope and suitably epic vision alone. This gigantic undertaking is never anything less than stunning for practically every second of its almost three-hour running time, surpassing the considerably large expectations of an over-eager audience at nearly every opportunity.

The fellowship has been fractured beyond repair. The ringbearer Frodo Baggins (Elijah Wood) and his loyal friend Sam Gamgee (Sean Astin) are making their way into the treacherous lands of Mordor alone, Meanwhile, their hobbit companions Merry (Dominic Monaghan) and Pippin (Billy Boyd) are being held captive by a murderous band of Uruk-hai making their way to the traitorous wizard Saruman (Christopher Lee). But they will not be left to die. Human Aragorn (Viggo Mortensen), elf Legolas (Orlando Bloom) and dwarf Gimli (John Rhys-Davies) are fast on the horde’s trail, and no matter what it takes they will save their two hobbit friends.

This chase comes to a sudden end with the arrival of an old friend. Thought dead in the caverns of Moria fighting the vicious Balrog, the wizard Gandalf (Ian McKellen) is brought back to join the fight. Joining the three warriors, he lets them know Merry and Pippin have been safely let out of danger and into the arms of the ancient tree creatures known as the Ents, instructing Aragorn, Legolas and Gimli to stop worrying about the two hobbits and that they must change direction and make for the kingdom of Rohan immediately.

As for Frodo and Sam, enter into a dangerous alliance with the devilish Gollum (Andy Serkis). Hoping to find some shred of his former self still intact, the ringbearer spares the wicked creature’s life in return for leading them into the heart of Mordor. At first Frodo’s trust seems to pay dividends as the ravaged soul of the beast, brutalized to virtual erasure under the influence of the One Ring for so many decades, begins to awake from its exceedingly long slumber, the former hobbit making a valiant attempt to beat down the psychotic influences of Gollum and let his former self known as Sméagol regain control. But the influence of the One Ring is not so easily overcome, and Sam isn’t so certain their new guide isn’t just biding his time as he plots both his and Frodo’s demise.

That is a lot of balls in the air to try and juggle successfully, and with handfuls of new characters added to the mix director Peter Jackson and his team of craftsman unsurprisingly have their work cut out for them. Yet it is all handled splendidly. Introduction of the new characters is handled quickly and with eloquence. What more, even with the sequel’s breakneck pace each person is given room to develop into a fully-formed multidimensional human being.

The best of these new human faces are Éowyn (Miranda Otto) and Théoden, King of Rohan (Bernard Hill). Otto is magnificent, her gorgeous face glistening with determination and purpose even in the face of the gravest danger. But she’s no girly-girl, and her growing infatuation with future king Aragorn is quietly subtle. Hill is even better. As for Théoden, he’s broken shell of a man first introduced, poisoned by the venom-filled words of his adviser Gríma Wormtongue (a slithery Brad Dourif). But with all his character loves and holds dear under threat of annihilation, Hill blossoms from lost soul to worried king to forceful leader throughout his story arc, adding a level of haunted gravitas to the story that’s superb.

The seductive influence of greed, power and pure evil are ever-present, most notably in the film’s most ingenious creation Gollum. Here is the first completely CGI character that isn’t just a technical showpiece, and credit for that must fall as much on actor Serkis’ shoulders as it should the production’s technical crew. It is a delicious performance overflowing in internalized conflict and irrational obsession, all of it raging inside the body of a pitiful lost soul. While I can’t say these visual effects are seamless, Gollum is far from photorealistic, that does not make them any less impressive. This is a groundbreaking performance that will change the cinematic game forever, the creature’s movements and mannerisms birthed from the mind of the actor creating them and then dazzlingly augmented by Jackson’s crackerjack effects team.

At its center, The Two Towers delivers one of the most spectacular battle sequences I have personally ever seen. The Battle of Helm’s Deep is like Henry V at Agincourt but with the odds multiplied by at least a factor of ten. Jackson unleashes a flurry of flying arrows, swinging swords and huge explosions. Taking up a full hour of screen time, this is a titanic struggle between good and evil where the outcome always feels, even for those who have read Tolkien’s book, somewhat in doubt. It’s breathlessly incredible stuff, the final showdown an eye-popping, emotion-fueled triumph that had me wanting to rise to my feet and cheer.

Yet as magnificent as all of that might be Jackson never loses sight of the bigger picture. The director astutely hints at what is still to come, knowing full well that the major dramatic twist and turns will culminate in force during the trilogy’s final chapter. But he still allows for this film to stand entirely on its own even though it is the middle chapter of the story. This is a landmark epic and a glorious entry into what is quickly becoming the most entertaining movie trilogy since the original Star Wars series. I was left perfectly contented by the time things came to their expected cliffhanger of a conclusion, and I’m beyond positive The Lord of the Rings: The Two Towers is a motion picture I’ll happily watch multiple times in the future.

actionadventureFantasyThe Lord of the Rings 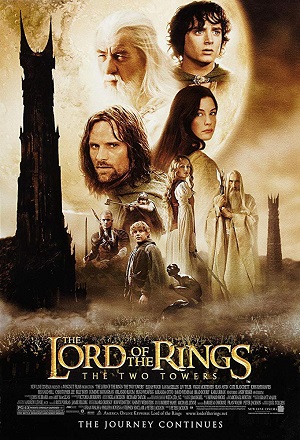