Magical Maleficent Magnetically Rises from the Ashes of its Moribund Predecessor

As hard as I try to leave any and all preconceptions aside the moment I step into the theatre, I cannot say I was particularly excited to give Maleficent: Mistress of Evil a look. Even though Angelina Jolie was perfectly cast as the title character and Elle Fanning made for a suitably delightful Princess Aurora, Disney’s 2014 fantasy-adventure Maleficent didn’t do a lot for me. This retooling of the timeless fairy tale and a dramatic reinvention of the studio’s 1959 animated classic Sleeping Beauty felt overstuffed, anemically plotted and emotionally facile, all of which made the resulting motion picture a depressing disappointment I almost wish I hadn’t seen. So sitting down to watch a sequel? Five years after the fact? Let’s just say that wasn’t high on my list of priorities.

Directed by Joachim Rønning (Kon-Tiki), shock of shocks I had a pretty nice time watching how this second chapter in Maleficent and Aurora’s ongoing tale played itself out. The film is a far more confident enterprise, overflowing in color, pageantry and excitement. It has a visual flair and an ingenuity the original bizarrely lacked, and freed from the shackles of trying to emulate Disney’s animated adventure or keeping one footstep on the path outlined by both the Brothers Grimm and Charles Perrault way back when, screenwriters Micah Fitzerman-Blue, Noah Harpster and returning scribe Linda Woolverton (who also conceived the original story) manage to move things in a new direction I was pleasantly surprised by. Never trying to be more than the kid-friendly spectacle it is, this is still a thoroughly enjoyable adventure, and unlike the first one I’m actually quite happy I gave it a look.

It’s been five years since the powerful dark fae Maleficent declared her godchild Aurora Queen of the Moors. In that time her trust in the young woman has only increased, Aurora’s adoration for all the supernatural creatures and fairies living within this protected forest as selfless as it as all-encompassing. But the human is still in love with the dashing Prince Philip (Harris Dickinson), and after all this time he’s finally gotten up the nerve to propose. Now the couple feels the need to introduce their parents to one another, just the idea of this family dinner sending shivers up Philip’s spine even as Aurora assures him all will be fine.

Turns out his trepidation wasn’t misplaced. While the initial meeting between Maleficent and Philip’s parents King John (Robert Lindsay) and Queen Ingrith (Michelle Pfeiffer) appears to be going fine, it isn’t too long before the two women are at odds with one another and the peace of a tranquil dinner is shattered into pieces. Worse, King John is cursed by a strange affliction that renders him unconscious, putting the uneasy peace between the human world and the Moors in instant jeopardy. Queen Ingrith is eager to blame Maleficent for everything that has happened, and she’s more than willing to take her kingdom to war against the fairies and all of the other supernatural creatures of the world to prove she’s right.

At right about two hours in length, it’s safe to say that Fitzerman-Blue, Harpster and Woolverton fit as much into their narrative as time allows, their screenplay overflowing in so much plot it almost bursts apart at the seams. We’ve got side narratives involving a lost civilization of dark fae led by Chiwetel Ejiofor and Ed Skrein, the magical creatures of the Moors under attack from a mysterious weapon engineered by one of their own working inside the hidden bowels King John’s castle, an attempt on Queen Ingrith’s part to convince Aurora her godmother is evil and cannot be trusted, and Prince Philip trying to come into his own as a leader. You also have Aurora playing medieval Sherlock Holmes as she tries to discover the truth behind the curse afflicting the king, while at the same time Maleficent reconsiders stopping her war against the humans five years prior, now wondering if doing so was such a good idea.

That’s a lot of stuff, and I can’t say Rønning juggles it all with confident assurance for every moment of his film’s running time. Prince Philip remains an ineffectual fop and it’s still difficult to understand what exactly it is that Aurora sees in him. The stuff involving the chemist (charmingly portrayed by a typecast Warwick Davis) never makes a ton of sense, while the reintroduction of a particular device utilized in the weaving of garments familiar to fans of the Sleeping Beauty tale is clunkily handled to say the least. There are other elements that feel rushed and emotionally undernourished, all of which makes a couple of sacrifices from a pair of memorable characters from the first film not resonate in any sort of meaningful way.

But Pfeiffer is a delicious addition, her Queen Ingrith a beautifully constructed character who ends up being surprisingly complex, all of which makes her an even more delectable foil for Maleficent to face off against. The veteran actress is clearly enjoying herself, her performance an exuberant frolic of warmth, menace, heartache and vitriol that grows in magnitude as things hurtle towards their suitably chaotic conclusion. Pfeiffer and Jolie are the primary reason this sequel ends up being worth the price of a matinee ticket, their verbal jousts arguably more spectacular than any of the effect-heavy set pieces that make up the climactic act. Also outstanding are Patrick Tatopoulos’ (Justice League) astonishing production design, Ellen Mirojnick’s (The Greatest Showman) eye-popping costumes and Geoff Zanelli’s (Christopher Robin) outstanding score, while Sam Riley steals scenes left and right as he returns to portray Maleficent’ s wise-cracking shape-shifting confidant Diaval, this time wondering aloud what it would be like to be transformed into something other than a raven.

I’m not going to say Disney is taking any risks with this sequel, the studio never appearing to allow Rønning the freedom to push the limits of his film’s PG rating in any noticeable way. I also could have used more time with the hidden hideaway of the dark fae (and especially a lot more with the woefully underutilized Ejiofor), their secret world and its complex hierarchy worthy of additional exploration. But Fanning continues to be a wonderfully vivacious Aurora, while Jolie magnetically dominates once again as Maleficent. I had a great time watching Maleficent: Mistress of Evil come to such vibrant, colorfully intoxicating life, and as magic tricks go this is one moribund franchise I’m glad to say has risen from the ashes of its predecessor and found fiery new life as its own, captivatingly idiosyncratic animal. 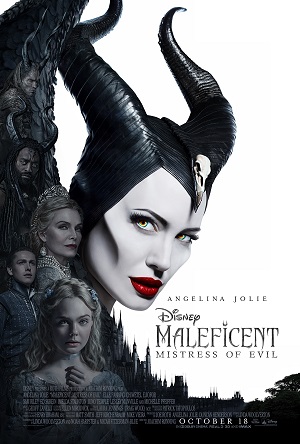