I can’t decide if I appreciate the bait-and-switch device at the heart of writer-director Shane Dax Taylor’s (Bloodworth) home invasion thriller Masquerade, or if it instead annoys me to the point that I feel like it is undeserving of the plaudits or kudos I’m tempted to throw its way. There is an element to what transpires that is tricky seemingly for the sake of being tricky, and I can’t say that’s a trait I’ve ever been all that fond of.

But oddly, it kind of works here. This Twilight Zone meets Tales from the Crypt flipping of the script is suitably character driven, and Taylor pours just enough of a foundation that, when the big reveal happens, I didn’t shake my head in disbelief. Better, it does not make any of the events we’ve experienced up to that point impossible. While not all of what transpires is plausible, it is believable, and sometimes that makes all the difference in the world.

After a pair of masked intruders break into her home, 11-year-old Casey (Alyvia Alyn Lind) begins a game of cat-and-mouse against her assailants. One of the pair is clearly over their head, unsure of what they’re supposed to do to nab the young girl currently putting a serious crimp in their carefully laid plan. As for the other villain, they appear to be all-too-eager to resort to lethal force. In fact, it’s almost as if that’s exactly the outcome they’re hoping for.

Bartender Rose (Bella Thorne) offers to drive wealthy art brokers Daniel (Austin Nichols) and Olivia (Mircea Monroe) home after they have too much to drink at a swanky fundraiser. Unbeknownst to them, something sinister is taking place back at their house. The power has been cut, the security system is switched off and their babysitter is not answering their phone.

That these two storylines will collide is not a surprise. How they do it is the deception Taylor coyly waits until the last few minutes to unveil, and the filmmaker does a decent job holding his cards close to his vest for the majority of the film’s brief 80-minute running time. Wisely, the director keeps the primary focus on Casey, only intermittently going back to Rose, Daniel, and Olivia, if only to remind the viewer this trio has a part to play in the climactic outcome.

There is an uneasy alliance between these two halves of the narrative. I would have liked a little more ambiguity as to how Rose fits into things; Taylor makes that reveal far too early, in my opinion. I also think the foreshadowing of having Casey watch a low-rent horror movie with her babysitter not too long before the intruders arrive is a bit on the nose. This made the subsequent ultra-violence slightly less impactful, and the shock value of what transpires is nowhere near as frightening as it should have been.

What Taylor does get right is how all of this affects Casey. This isn’t Home Alone or Deadly Games. This isn’t a wise-beyond-their-years youngster who cleverly lays traps for their assailants to cluelessly stumble into. No. Casey is an honest-to-goodness little girl who is initially scared senseless and has to find an inner resolve if she’s going to make it through the night alive.

I loved that. While her screams could be a tad irritating, and while some of her decisions almost made me want to throw something at the screen, the majority of her reactions and most of what she did to survive still came across as authentic. It’s honestly not until the very end where some of what she did rang a little false. But by that point, Taylor had garnered enough goodwill with me that I was fine with the convenient, violent silliness of it all. I was genuinely rooting for her to be victorious, and as far as I can tell, that’s exactly as it was supposed to be.

It’s too dark. I liked the way cinematographer Mark Rutledge’s camera slinks and glides throughout the hallways, bedrooms and attic spaces of Casey’s spacious home, but things are so dimly lit I found it frustratingly difficult to see what was going on. Ben Lovett’s score does help a great deal, however, The Wind and The Wolf of Snow Hollow composer once again adding a musical component to a motion picture that’s nothing short of exceptional.

It all comes down to the twist the entire plot hinges on. Taylor doesn’t cheat. The groundwork for this climactic sleight of hand has been laid. But I cannot say I cared enough about the characters and their fates that this reveal affected me from an emotional standpoint. Still, Masquerade pulls off this final act of subterfuge just well enough that I do believe some will come away suitably shocked and impressed — and maybe that’s enough for this one to warrant a mild recommendation. 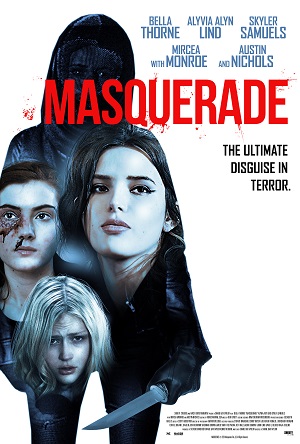