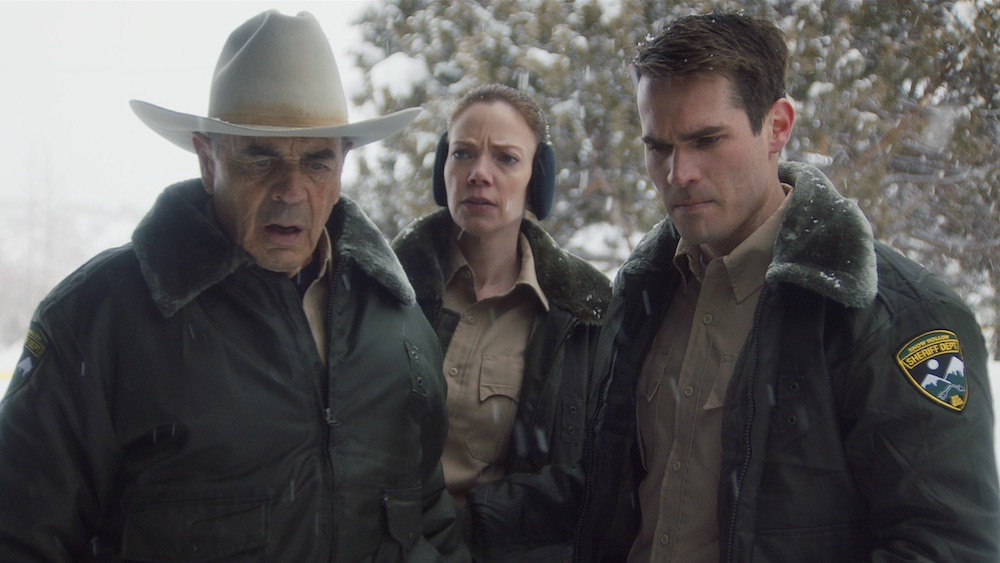 In the small community of Snow Hollow, a killer is on a rampage. First it was a weekend visitor spending a quiet romantic weekend with her boyfriend. Next it was a local snowboard instructor. Each woman was familiar to the town. Each was torn to shreds by something big, strong and incredibly powerful. With the bodies piling up, ailing Sheriff Hadley (Robert Forster) leaves it to his son and assumed successor John Marshall (Jim Cummings) to lead the investigation.

A follow-up to his inventive comedy-drama critical smash Thunder Road, writer/director/star Cummings’ The Wolf of Snow Hollow kept me on my toes. Reminding me of a pair of David E. Kelley productions (Lake Placid, “Picket Fences”) crossed with Joe Dante’s The Howling, this is a witty, surprisingly poignant, at times obnoxiously annoying and still continually thrilling genre mashup that’s as ingenious as it is enjoyable. While it does take a little time to get in sync with the energetically acerbic vibe, I got a big kick out of this one, and I have this sneaky suspicion it’s going to keep growing on me the more I keep thinking about it.

I was a little taken aback by the tone Cummings initially sets for the film. It has an agitated energy, almost aggressively so, Marshall a purposefully belligerent force of nature that frequently rubbed me the wrong way. But this is part of the magic that is Cummings’ masterful script. Marshall is battling several demons including his own alcoholism, the decaying health of his father, a shattered marriage and a teenage daughter who only puts up with him because she has to. These killings are the tip of a very large and extremely dangerous iceberg, and the inability of anyone in his department, including himself, to arrest the person responsible is only accelerating Marshall’s psychological deterioration.

This addiction angle is a sneakily a terrific add-on. No matter how long someone has been clean, even if they’ve been on the proverbial wagon for quite some time, Cummings deftly shows how stress and trauma can acerbate and derail even the most confident of recoveries. Not only does this give Marshall additional depth, but it also does the same for Sheriff Hadley, his daughter Jenna (Chloe East) and his chief supporter on the Snow Hollow force Officer Julia Robson (Riki Lindhome) as well. It helps ground the more sensationalistic aspects of this potentially supernatural mystery in ways that are intimately personal, the emotional dynamics adding a layer of character-driven complexity that’s sublime.

I don’t want to talk too much about that mystery if I can get away with it. The central question throughout is whether or not there is an honest to goodness werewolf stalking the women of Snow Hollow, and if I go into any of the ins and outs of that it could potentially ruin a surprise or two. What I will say is that I did find the ultimate reveal to be a tad rushed and slightly underwhelming. It works, and the climactic face-off is outstanding, I just didn’t find this reveal to be as compelling as I did so much of the remainder of the film.

Let me take a second to talk about Forster. He’s so dang good, and the way he slips underneath Sheriff Hadley’s skin with such effortlessness is nothing short of incredible. A tremendous actor who I can’t help but feel was never given the plaudits he deserved, seeing him here in one of his final performances brought me both unimaginable joy as well as a blast of heartrending sadness. Suffice it to say, Forster is marvelous, each scene he’s in one I selfishly did not want to see come to an end.

Cummings gives a sneaky-great performance, especially considering that, as already stated, Marshall isn’t the most endearing guy in the world. But he digs in, and his constant shifts in emotion and violent sudden outbursts are bracingly authentic. Cummings makes real his character’s battles with addiction, and once those are coupled with the other outside factors complicating his life, I found it difficult not to want to give the guy a heartfelt hug while also enthusiastically root for him to solve the case and bring the murderous hellspawn he’s hunting to justice.

The makeup effects are sensational, while the supporting performances, especially a perfectly cast Lindhome, are solid across the board. Cinematographer Natalie Kingston shoots things with elegantly unsettling precision, while Ben Lovett’s (I Trapped the Devil) magnificent score is one of the year’s best. The Wolf of Snow Hollow is a bloody good October treat, and the only tricks Cummings has up his sleeve are of the imaginatively creative type worth getting excited about and are nothing to be afraid of. 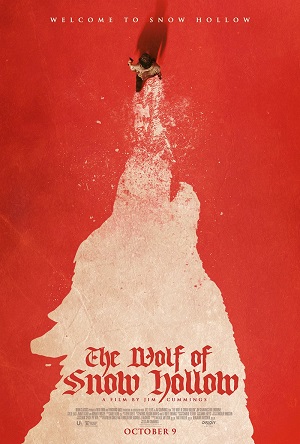