Hanging Out with Me and Earl to Die For

Senior Gregg (Thomas Mann) does just enough to get by, doing his best to making sure he’s friendly with every clique at his High School but doing so without making close acquaintances that way he can avoid acquiring enemies. In his spare time he makes parodies of classic films with his lone friend Earl (RJ Cyler), the pair transforming cinematic greats like Apocalypse Now into “A Box O’Lips, Wow” and A Clockwork Orange into “A Sockwork Orange.”

Things change when Gregg’s mother (Connie Britton), with the backing of his laidback sociology professor father (Nick Offerman), insists he make an attempt to befriend fellow classmate Rachel (Olivia Cooke). She’s just been diagnosed with cancer, and all involved, including the girl’s mother Denise (Molly Shannon), think it would be a good idea if he could be a friendly ear for her to talk to. Both kids realize this has more to do with making their respective parents feel better about themselves than it has anything to do with them, but they’ll make the best of the situation all the same, forging an emotional bond neither expected in the process of doing so.

Screenwriter Jesse Andrews, adapting his own best-selling book, and director Alfonso Gomez-Rejon (The Town that Dreaded Sundown) have delivered a heartfelt, bracingly naturalistic winner with festival favorite Me and Earl and the Dying Girl. While following a template that could hardly be considered original, the film is nonetheless a quirky, authentically emotional, structurally complex gem that builds its central relationships with a delightfully delicate touch. It refuses to bend or compromise, and while the picture wears its indie street cred like a badge of honor it doesn’t get so arch or artificial as to make any character’s growth or maturation feel fake or insincere.

Not that comparisons to last summer’s breakout hit The Fault in Our Stars are unavoidable, and while this effort is an entirely different animal it goes without saying they still walk in fairly similar footsteps. But both stand on their own merits, however, the latter more thanks to the impressive efforts of its cast (most notably Shailene Woodley, Ansel Elgort and Laura Dern) than its actual scenario, although Josh Boone’s direction was excellent as well. This movie, however, is arguably a bit better, in large part because it refuses to bend to convention for the majority of its running time (if notably not all of it).

Andrews, making his debut as a screenwriter (apparently under the tutelage of producer and Tangled, Danny Collins and Crazy, Stupid, Love. writer Dan Fogelman), does a masterful job with the adaptation. He remains true to the core idiosyncrasies that give the material its beauty and depth while at the same time streamlining things in a way that works cinematically. He also allows Gregg to remain oddly unsympathetic, making it all the more poignant and affecting when he slowly starts to realize just how much his time with Rachel has started to matter.

Mann, who has made wonderful impressions in films as diverse as Welcome to Me, Barely Lethal and Hansel & Gretel: Witch Hunters, is finally given an opportunity to shine and runs with it. He doesn’t care if Gregg can come across as a little bit of a deeply too sarcastic a jerk. It doesn’t bother him that not everything he does paints him in the nicest of lights. Instead, he manufactures a portrait of adolescent growth for what it is, giving the naked, raw and unvarnished truth, doing so with a sideways smirk and a happily agreeable shrug whenever he can. 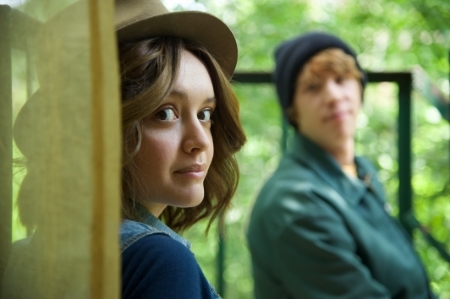 As wonderful as he is, it wouldn’t mean a thing if his two costars weren’t up to the challenge of equaling him. Cyler and Cooke are superb, each having a number of sterling moment that help crystalize the ever evolving relationships while making their own characters grow in the process. Each is magnificent, and if they aren’t on their way to becoming in-demand character actors they certainly should be after this. Cooke, in particular, has a number of sublime scenes, especially a series of back-and-forth verbal battles with Mann revolving around throw pillows speaking to so much more than their relatively minor usefulness as anything other than decoration.

Some of the inherent eccentricities do get in the way. Offerman’s laidback stay-at-home college professor is good for a handful of laughs but I can’t exactly be entirely certain how all of his wacky weirdness actually matters as far the bigger picture is concerned. As for Shannon, she’s wasted, Denise’s lascivious and uncouth behavior towards Gregg more uncomfortable than it is humorous even when taken in context with all that it is the trying to stay positive single mother is going through. There’s also a bizarre little subplot involving a teacher (played with smooth, confidently masculine bravado by Jon Bernthal) and his potential ties to pot-laced soup that goes nowhere, only existing so a pair of teens can go on a psychedelic free-for-all that’s of precious little consequence.

Even so, Me and Earl and the Dying Girl remains one of 2015’s stronger entries released to theaters up to this point. It builds to a supremely moving climax that earns its tears honestly, and while some manipulation is exerted upon the audience it’s so subtly delivered its presence is barely felt. Gomez-Rejon handles things with supreme confidence, balancing humor and emotion with enticing ease. His film rises about disease-of-the-week melodrama to become something personal, intimate even, the final moments leaving me with a sense of warmth, comfort and friendship I cannot wait to experience again. 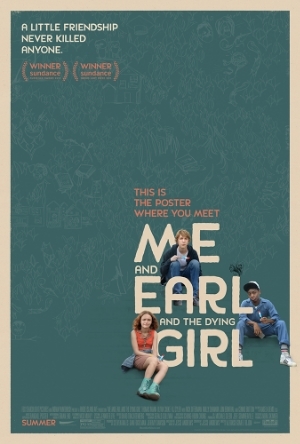