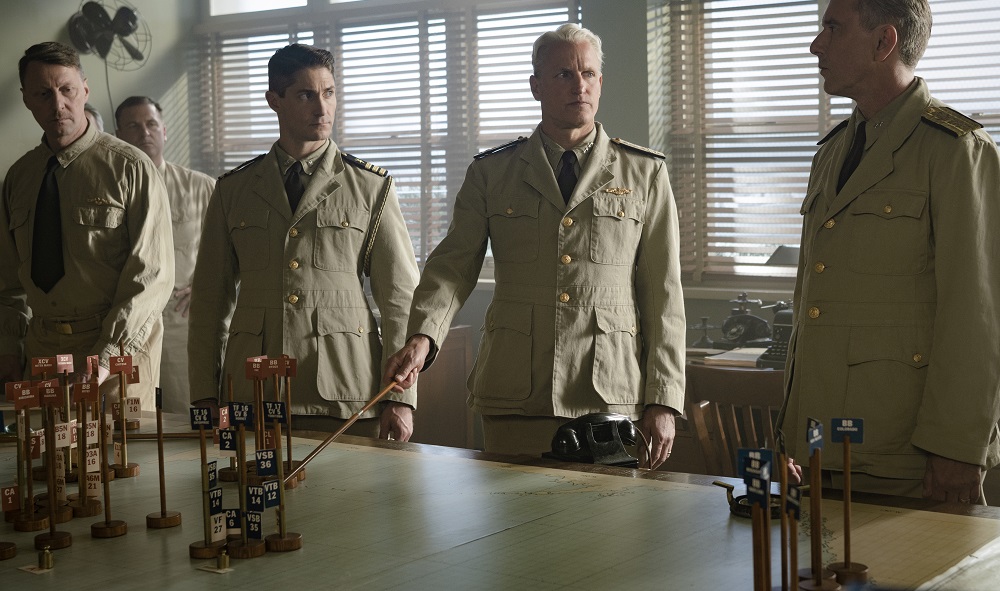 Director Roland Emmerich’s ambitious WWII drama Midway might as well as be subtitled “The War in the Pacific.” Working with writer Wes Tooke, the Independence Day and White House Down filmmaker has crafted a military procedural that covers a little over six months of American military history, his epic beginning with the events at Pearl Harbor on Dec. 7, 1941 and roughly coming to a conclusion in June of 1942 with the pivotal naval clash between the United States and Japan. In between viewers are also treated to highlights of a clash in the Marshall Islands and well as James “Jimmy” Doolittle’s famed aerial bombing of Tokyo in April of 1942 (an event chronicled magnificently by the 1944 classic Thirty Seconds Over Tokyo starring Spencer Tracy and Van Johnson).

It’s honestly too much material for the 138-minute military procedural to handle with any sort of care, nuance or intimacy. For all of its historical accuracy, Emmerich’s latest is a dry, emotionally flat drama that comes across more like a big budget History Channel recreation than it does a well-plotted, character-driven motion picture. It’s strangely just not all that interesting to watch, and for all of the whiz and for the amount of bang, the interior human elements are so strangely nonexistent none of that matters in a meaningful way.

Granted, I could say close to the same about director Jack Smight’s 1976 version of this story starring Charlton Heston, Henry Fonda and a bevy of additional superstars. But where that Hollywood effort made up a main character for the audience to focus their attentions on, Emmerich and Tooke do not do the same. They trust viewers will be okay following in the footsteps of people like pilot Dick Best (Ed Skrein), intelligence officer Edwin Layton (Patrick Wilson), Admiral Chester W. Nimitz (Woody Harrelson), Lieutenant Commander Wade McClusky (Luke Evans) and naval radioman Bruno Gaido (Nick Jonas), and I do applaud the filmmakers for doing this.

Most of the focus is on Best, a hotshot pilot who rises through the ranks to finally command his own squadron during the Midway battle where he would become a military hero. He’s arguably the main character, Tooke’s screenplay attempting to give brief insights into his home life with wife Ann (Mandy Moore, doing what she can with a nothing role) and relationship with fellow pilot and best friend Clarence Dickinson (Luke Kleintank). There’s also some additional back-and-forth with McClusky about the nature of their jobs and the example they need to set for the less experienced pilots, these brief dialogues arguably the core thematic conversation Emmerich appears most interested in exploring.

The other main component of the overall story focuses on Lieutenant Commander Layton. He’s the intelligence officer who posited a Pearl Harbor attack was probable but felt he wasn’t adamant enough in his concerns and let the country down. Yet new Commander in Chief of the Pacific fleet Admiral Nimitz keeps him on his staff, believing his experience will be of value in the fight against the Japanese. Layton and his team are the ones who conclude that Japanese Marshal Admiral Isoroku Yamamoto (Etsushi Toyokawa) is planning an attack against Midway, one that couple potentially crush the U.S. fleet. But even though leadership is hesitant to believe him, this time around the Lieutenant Commander will not be dissuaded, convincing Admiral Nimitz to plan a surprise counterattack that will catch the Japanese unaware.

What happens next is the stuff of historical record, so it isn’t like the outcome is ever in doubt. As such, having an emotional connection to the characters is key, and on that front Emmerich and Tooke come up short. Because their epic motion picture plays more like a highlight reel than an actual three-act story overflowing in character-motivated complications and issues needing to be resolved, I just never cared about who lived or who died. Sacrifices became meaningless. Deaths both in the air and on the sea barely registered. There wasn’t any tension or suspense, and by the time things came to an end I was almost thankful the movie was over.

This is a little unfair. Even if it does tend to all look like PlayStation or X-Box far too frequently, Emmerich still knows how to stage sequences of battle and destruction better than just about anyone. He has respect for the soldiers and what they went through during WWII and this helps make these massive action sequences, while impressive, never feel like scenes from a video game or a jingoistic action movie. There is a weightiness to these moments that’s welcome, and while Emmerich is no Steven Spielberg or Terrence Malick, he still shows just enough directorial bravado to make me somewhat appreciate all he was trying to do.

It isn’t enough. The characterizations mostly feel stilted and false, few of the actors able to inhabit their roles with any degree of authenticity. Both Harrelson and Evans do a decent job at rising above the fray, while Wilson gives the strongest, most movingly complex performance in the film and it’s almost sad more time isn’t spent focusing on him and his team of intelligence operatives. As for everyone else? They’re not so lucky, and whether it’s the corny dialogue or the retrograde Hollywood way in which they’ve apparently all been instructed to deliver their lines most of the actors fail to make an impression and, if they do, it’s often an unintentionally laughable one. Maybe Midway will play better at home, but as far as theatrical experiences covering a pivotal moment in WWII history are concerned Emmerich’s drama fails to hit the target, and I find this disappointing to say the least. 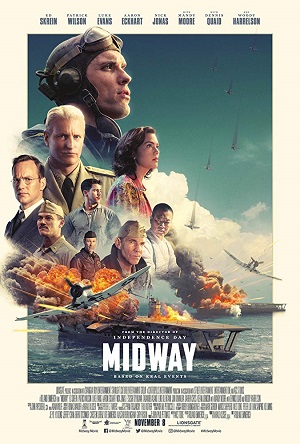