The banana-yellow Minions from the Despicable Me movies are amusing. They make me laugh. Their gonzo irreverence does offer a great deal of comedic value, and it is easy to see why kiddos all around the world have fallen in love with them.

But if 2015’s standalone animated adventure Minions taught us one thing, it’s that these pint-sized whippersnappers were typically better utilized in measured outbursts of destructively whacky adrenaline and not as the main attraction. Their antics got old, making spending close to 90 minutes with them and them alone a decidedly difficult endeavor from an audience standpoint.

After watching Minions: The Rise of Gru, though, I’m starting to rethink those previous statements. I’m shocked by how good a time I had watching this sequel, which channeled everything from Animaniacs to Pinky and the Brain to classic Road Runner Looney Tunes shorts. While it’s hardly an animated classic, it turns out to have been a terrific idea to somewhat lighten the tone and play up the inherent silliness fueling the lunacy.

Probably the smartest thing director Kyle Balda, co-directors Brad Ableson and Jonathan del Val, and writers Matthew Fogel and Brian Lynch do is bring together the Minions with their Despicable Me employer Gru (voiced by Steve Carell) while he’s still an elementary school student dreaming of supervillain stardom. The film shows the wannabe bad guy learning how to communicate and work with his blobby companions; their future adult relationship finds its definition here.

The plot is absurd — and that’s as it should be. Gru’s pursuit of being one of the world’s greatest supervillains leads him to audition for the Vicious 6. Current members Belle Bottom (Taraji P. Henson), Jean-Clawed (Jean-Claude Van Damme), Svengeance (Dolph Lundgren), Stronghold (Danny Trejo), and Nun-Chuck (Lucy Lawless) are in need of a newcomer on their team after having ousted their former leader Wild Knuckles (Alan Arkin). When Gru is given the cold shoulder, he gets back at the baddies by stealing an ancient medallion that’s the key to them achieving enormous power.

It gets goofier from there, and trying to dig too deeply into the plot dynamics is an obvious waste of time. The big takeaways are that Gru will join up with his idol Wild Knuckles to fend off the Vicious 6 and plucky Minions Kevin, Stuart, Bob, and Otto (all voiced by Pierre Coffin). Believing his beloved “mini-boss” has been kidnapped, he will learn kung fu from lethal acupuncturist Master Chow (Michelle Yeoh). That’s all you need to know.

That’s more than enough craziness for one movie, and Minions: The Rise of Gru gets as much mileage out of it as it can. There is a plethora of absurd sight gags, and while the verbal jokes are kept to a minimum, several of those pinch up against the funny bone nicely. The late 1970s setting is surprisingly effective, and many of the music choices induce an unexpected chuckle. Most importantly, kids are going to love this sequel, but what’s surprising is that their parents might find themselves giggling somewhat right along with their youngsters. 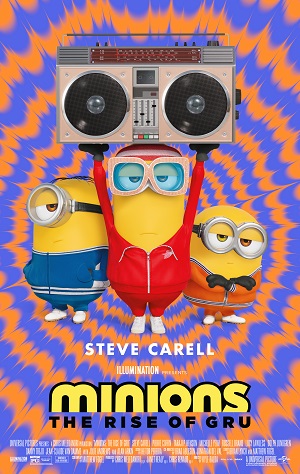