Sometime in the not-so-distant future, humanity is on the brink of extinction. A cataclysmic event led to a worldwide conflict that devastated the planet. People retreat to movable cities of varying scales, most of them small, barely more than a few homes, shops and refineries of one sort or another. But the larger ones, the more massive of these mechanical beasts, they may house countless thousands while also containing the remnants of civilizations that otherwise would have been lost to the sands of time. They feed on the smaller vehicles, utilizing them for fuel while also forcing their former inhabitants to join their society whether they wish to or not.

The most lethal of these movable metropolises is London. Currently it is marauding across the remains of Europe, esteemed archeologist and revered city planner Thaddeus Valentine (Hugo Weaving) mysteriously looking for ancient technological artifacts under the guise of trying to construct a machine capable of powering the city without having to fuel its furnaces with scrap metal and other combustible odds and ends. In reality, he wants to rebuild a weapon capable of opening up resource-filled strongholds protected be massive shield walls no movable city has ever been able to penetrate. Valentine wants to utilize the same sort of device the ancients unleashed that titled the world to the edge of apocalypse, trusting that the citizens of London will either be too stupid, too greedy or too timid to realize what he’s about to do is nothing short of evil.

Based upon the best-selling series of science fiction-adventures by author Philip Reeve, if nothing else Mortal Engines boasts one of the most eye-popping, adrenaline-filled opening sequences of any movie I’ve seen in 2018. The directorial debut for veteran King Kong and The Hobbit trilogy special effects artist Christian Rivers, this introductory sequence setting up the primary characters, the world they live in and the gigantic moveable cities on which so much of humanity now lives is something else. It’s a freewheeling, expertly realized visual extravaganza. I was glued to my seat, eager to discover where Reeve and Academy Award-winning screenwriters Fran Walsh, Philippa Boyens and Peter Jackson (the Lord of the Rings trilogy) were going to take things next, the energetically cohesive way in which they set the stage for all the action to come nothing short of thrilling.

Which is exactly why I ended up finding this particular feature to be so frustratingly disappointing. There’s so much to love, so much that held me spellbound, the fact I’m sitting here annoyed that the whole thing never works nearly as well as it by all accounts early on looks as if it is going to has me lingering in a state perilously close to anger. While the story owes a great deal to everything ranging from Flash Gordon, to Japanese anime, to The Hunger Games to – surprise, surprise – Star Wars isn’t much of a shock, that Walsh, Boyens and Jackson seem to be having such a devil of a time juggling all of the various narrative strands considering their success with The Lord of the Rings undeniably is. Key characters are introduced, do something interesting and then subsequently disappear for large chunks of the story only to be reintroduced at random moments. Worse, the climax feels hurried, haphazardly put together and oddly unfocused. Nothing holds together in an emotionally satisfying way, and by the time a few surviving heroes quite literally flew off into the sunset I was honestly flummoxed as to why I was supposed to have cared about anything that just happened throughout the course of this 128-minute endeavor.

But gosh darn do I want to care. The way Rivers introduces all his primary characters during that opening sequence, most notably Valentine, his whip-smart daughter Katherine (Leila George) and erstwhile historian and wannabe pilot Tom Natsworthy (Robert Sheehan), while also juggling a humongous action sequence that has to explain the nature of these movable cities while at the same time showcase what they can and cannot do, all of that is handled with exhilarating confidence. Best of all is the way in which the filmmaker showcases the story’s primary heroine, the red scarf clad firebrand Hester Shaw (Hera Hilmar). Rivers immediately cements her as this film’s most iconic personality, giving just enough information about Hester in these initial moments to enflame my curiosity and get me genuinely excited to discover why she and Valentine are instant enemies right from the first second they entered into one another’s company.

So why do some of these characters, most notably Katherine, just up and vanish for long stretches only to reappear at random moments to either help fill in some of the expository holes or do something important when no one else is apparently available to do so? Why is a key subplot involving Hester and a robotic, formerly human bounty hunter named Shrike (a phenomenal Stephen Lang) the most emotional one in the entire film even though there’s another plot strand involving the young woman and her growing infatuation with Tom to contend with as well? Why does the climactic battle between the city of London and a ragtag group of aerial pirates led by the enigmatic Anna Fang (Jihae) feel rushed, confusingly edited and sloppily assembled when everything else up to that point has been so visually resplendent and narratively coherent? 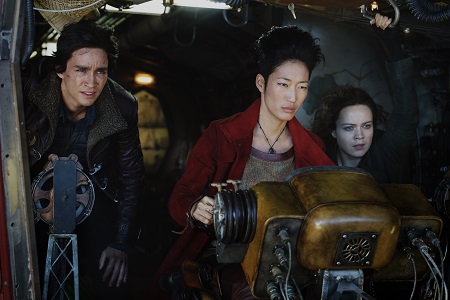 These are just some of the issues I had as Mortal Engines roared towards its conclusion. It felt like large chunks were taken out of the film almost as if someone ordered Rivers, Jackson and the rest of the creative team to whittle things down as close to a two-hour running time as possible. As interesting as this world is and as spectacularly realized as much of it might be, at a certain point all of the missteps can’t help but take an almost catastrophic toll. While my eight-year-old self was thrilling to a lot of what was happening, as magnetic and as empowering a pair of heroines Hester and Anna end up proving to be (both Hilmar and Jihae deliver dynamically compelling performances), I still couldn’t get past just how increasingly absurd and disconnected everything became. By the time the key face-off the entire story had been building towards finally came to pass even that turned out to be something of a disheartening letdown, and a moment that should have had me wanting to rise to my feet and cheer instead had me slumping nearer to the floor letting out an inaudible groan.

Look, I’m still impressed by much of what Rivers is able to accomplish. This is an intriguing world, and the surviving characters are all ones I’d not be against following on another adventure if it were ever to happen. Also, just from a technical standpoint the visual effects, sound design, costumes and production design are some of the best I’ve seen this year, and had this film screened for press earlier in the month I’d I’ve voted for all of them for awards consideration in the various critic organizations I’m privileged to be a part of. Is it enough for me to give Mortal Engines a recommendation? No, no it is not. But that doesn’t mean there’s still not plenty to love, and if my eight-year-old self has its way that might be enough to give this sci-fi spectacle a second chance sooner rather than later. 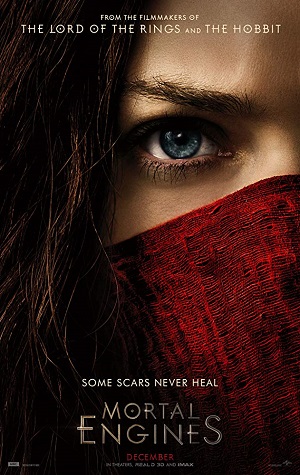